Mount Sinai, also known as Mount Moses or Mount Horeb, is a mountain in the South Sinai region of Egypt. Standing 7497ft (2285m) tall, the peak is best known as the possible location of the biblical Mount Sinai, where according to the both the Bible and the Quran, God told Moses the Ten Commandments. Upon reaching the summit, visitors are greeted with stunning views of the Sinai Peninsula; a desert landscape featuring grand, harsh scenery with broken mountains and deep, dry ravines.

According to the book of Exodus, Moses first heard the word of God from a burning bush, who told him to lead the Israelites out of Egypt. Moses then returned to Egypt and convinced the Pharaoh to release the Israelites to him. After months of travel, they arrived together at the foot of Mount Sinai. Upon arrival, there was a loud boom of thunder and lightning, which signalled Gods arrival. Moses was summoned to the mountain top, and stayed there for an impressive 40 days and 40 nights. Upon his return, he delivered to the Israelites 10 Commandments given to him by God.

If you are looking to climb Mount Sinai, there are two route options available. The routes are fairly poorly signposted, so be careful when setting out, particularly if you are beginning the climb in the darkness of night.

The first route involves taking the 3750 steps of penitence, carved out of the mountain face by monks. As I’m sure you have guessed by the name, this is the more challenging of the two paths, and certainly should not be attempted by those physically unfit. No climbing equipment is required though, just a strong set of legs and good cardiovascular fitness. This route features superb views down into the valley, even throughout the night. The alternative option is the Camel Path. This is the best option for those seeking a gentler climb, with the path meandering its way slowly up to the summit. As the name suggests, there is the option to ride a camel for the majority of the route, though you will have to dismount approximately 1km from the top. If you do decide to journey up the mountain by camel, remove any expectation of a smooth, comfortable ride.

Ultimately, both paths will meet at Elijah’s Hollow, also known as the Seven Elders of Israel, a natural amphitheatre where you’ll be have the chance to rest and drink tea, prior to making the final ascent up 750 steps. At the top of the mountain, you will find a small chapel in homage to the Holy Trinity, constructed back in 1934 atop of the remains of a 16th century church. Better yet, if you have timed your journey correctly, you will be met with a beautiful, unrivalled view of the sunrise over the rocky Sinai Peninsula.

When is the best time to visit Mount Sinai?

Avoid travelling in the Winter months (November to February) as subzero temperatures and snow are common at the summit. Spring and autumn are popular times to climb, whilst summer can also be a good time to visit if you don’t mind the scorching day time temperatures. The most popular time to climb Mount Sinai is through the night, so that you reach the summit in time to see a beautiful sunrise. Even in the warmer months, there can be a big difference between weather in the day and at night, so be prepared and don’t just wear shorts and a t-shirt.

How to get to Mount Sinai

The only way to travel to Mount Sinai is by road. It’s likely to be a relatively long drive as the mountain sits in a remote location. Sharm-el-sheikh (230km) is approximately a 3 hour drive, whilst the towns of Dahab (133km) and Nuweiba (120km) are closer to 2 hours away. You don’t necessarily need to a hire a car though, as there are many tours in operation. The typical tour arrives at the foot of the mountain at 1am, providing climbers with the time necessary to reach the peak in time for sunrise. 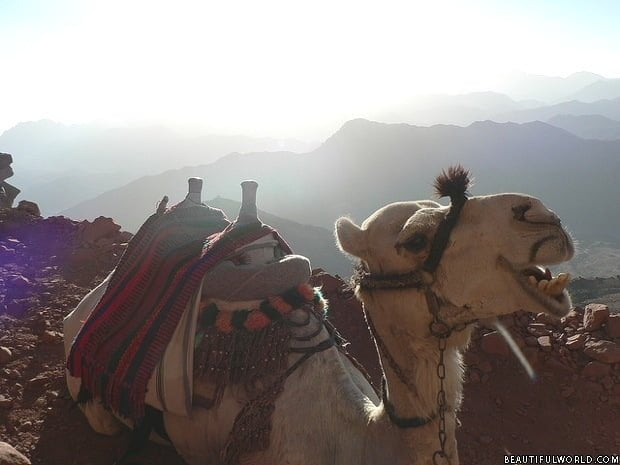 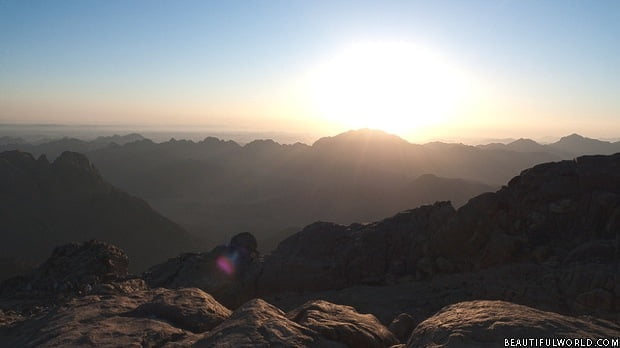 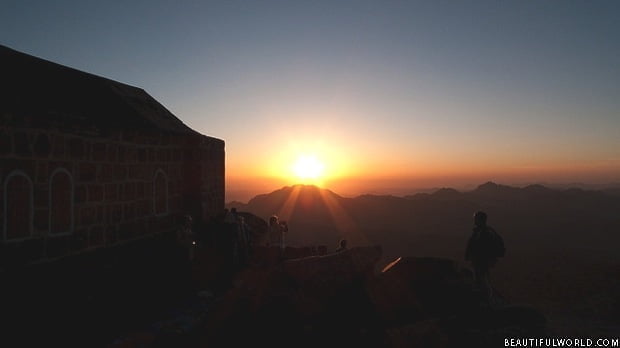 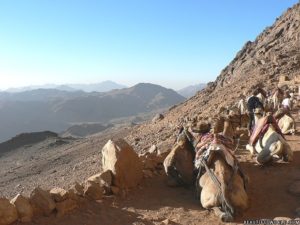