Ireland is a wonderful country with a history steeped in legend and folklore and the rugged coastline of County Clare has more than its share of intriguing tales. Visitors to the magnificent Cliffs of Moher cannot fail to be impressed by such natural grandeur but may also wonder about the origins of some of the names given to features along this rocky coastline. The name Moher is believed to be derived from the old Irish word Mothar meaning Ruined Fort and it is recorded that, in the first century B.C., a fort existed at one of the cliffs’ highest points. Although no signs of the original fort exist today, its existence is widely acknowledged as true.

The Cliffs of Moher are the most visited natural attraction in Ireland with around a million visitors each year. With a maximum height of 214 metres and stretching a length of 8 kilometres, these cliffs are impressively large and extremely steep. This is the point where Ireland’s gentle green landscape is pounded by the full force of the Atlantic Ocean. Some of the finest sea views to be found anywhere can be enjoyed and this site has not only been used as an ancient fort but, during the Napoleonic Wars, a lookout post and signal tower was built in order to give warning of any approaching French ships.

Another strange name has been given to a section of the cliff where a promontory juts out into the sea. This is called Hag’s Head and although a rather mundane explanation would be that such features are often referred to as Heads or Headlands and possibly this land may have once been owned by someone called Hag but the most widely accepted explanation stems from an old Irish legend as follows.

Cu Chulainn was a famous warrior, a member of the High King of Ulster’s “Red Branch” band. He had an admirer named Mal who was deeply in love with him but unfortunately the feelings were not reciprocated, possibly because Mal was a hag, or witch. He tried to avoid her but she pursued him relentlessly right across Ireland until he reached the cliff edge at Loop Head. His only escape was to leap off the cliff and onto a rock now known as Diarmuid and Grainne’s Rock. Mal, as determined as ever, jumped after him and, aided by strong winds catching in her skirts, landed on the rock with him. He them summoned all his strength and managed to jump back to the mainland. Mal followed but this time the wind was against her and she fell to the rocks below. The sea is said to have run red with her blood in the nearby bay (Malbay) and all that was left was her likeness imprinted in the Cliffs of Moher. This part of the cliff is said to resemble the profile of a seated woman looking out to sea but it really needs to be seen from a particular angle and a good sense of imagination is needed. A couple of glasses of Guinness would also probably help! 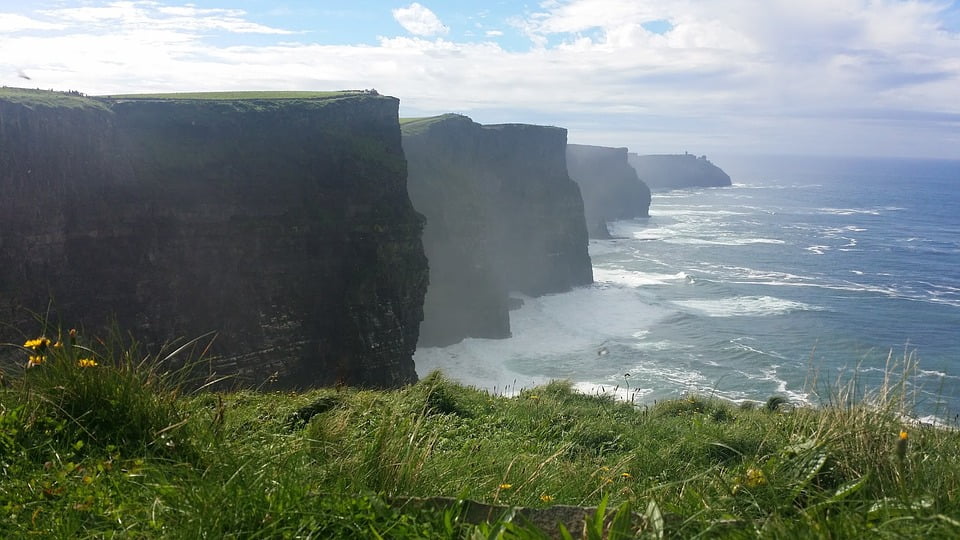 A stone-built tower can be seen close to the highest point of the cliffs at Knockardakin and visitors could be forgiven for assuming that this may have had some defensive role in the past but O’Briens Tower was simply built for the view to be enjoyed. It was built in 1835 by Cornelius O’Brien, a descendent of the High King of Ireland. In many ways he was a pioneer of the tourist industry and something of a visionary. He believed that attracting visitors to this area would help to relieve some of the local poverty of the time. O’Brien’s Tower is still open to the public and from the top of the tower on a clear day, the view includes Galway Bay, The Aran Islands, The Blasket Islands, Loop Head, The Dingle Peninsula and the Twelve Pins and Maum Turk Mountains. 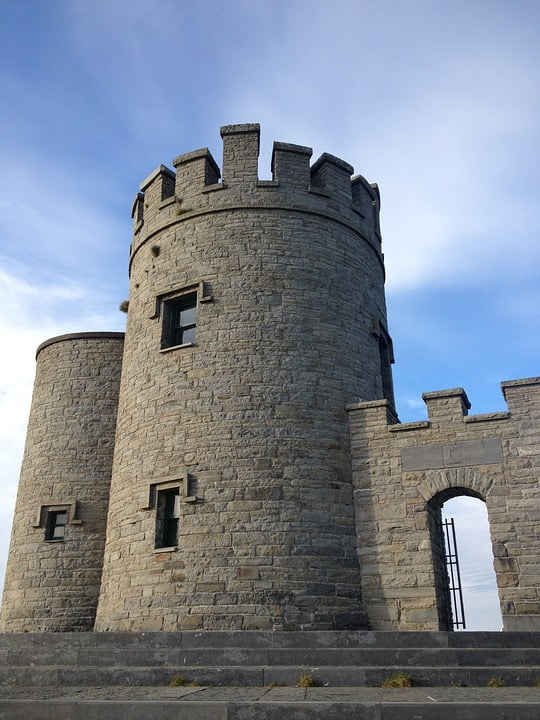 Geology of The Cliffs of Moher

The cliffs are formed from sedimentary rocks and some parts date back for over 300 million years placing them in the Upper Carboniferous Period. The rocks are mainly sandstones and shale and were laid down over a period of many millions of years at a time when this whole area formed part of a huge river delta. Individual layers can clearly be seen and variations in the rates of erosion give rise to the characteristic striated appearance of these cliffs. The sea is the major cause of erosion and caves and sea arches have formed along the lower levels as well as sea-stacks where large towers of free-standing rock are left as the cliff-face erodes and recedes.

Flora and Fauna of The Cliffs of Moher

In such an exposed location, only the most hardy plants can survive but the cliffs include many grassy sections and some rare wild flowers including sheeps bit, sea campion and sea pink. This is of course a very important ornithological site and a major breeding ground especially between April and July when over 30,000 pairs of birds are present. Over 20 different species can be observed including the kittywake, fulmar, guillemot, razorbill, puffin and the endangered chough. The seas nearby are often rich in plankton which attracts whales and whale-sharks. Seals are common visitors and dolphins are also sometimes to be seen.

The Cliffs of Moher Visitor Centre

Most visits to the Cliffs of Moher are likely to include calling at the Visitor Centre which is located roughly midway along the length of the cliffs. This environmentally friendly building is imaginatively set into the hillside to minimise its visual impact and it provides a wealth of information about the cliffs and surrounding area. Externally there is a large safe cliff-top viewing area which is fully fenced and all of the usual facilities are provided to make this a great family day out. The visitor centre also prides itself on offering educational visits making it a popular destination for school trips. Both primary and secondary school groups can be catered for and for those in higher education or engaged in research, special arrangements can usually be made. 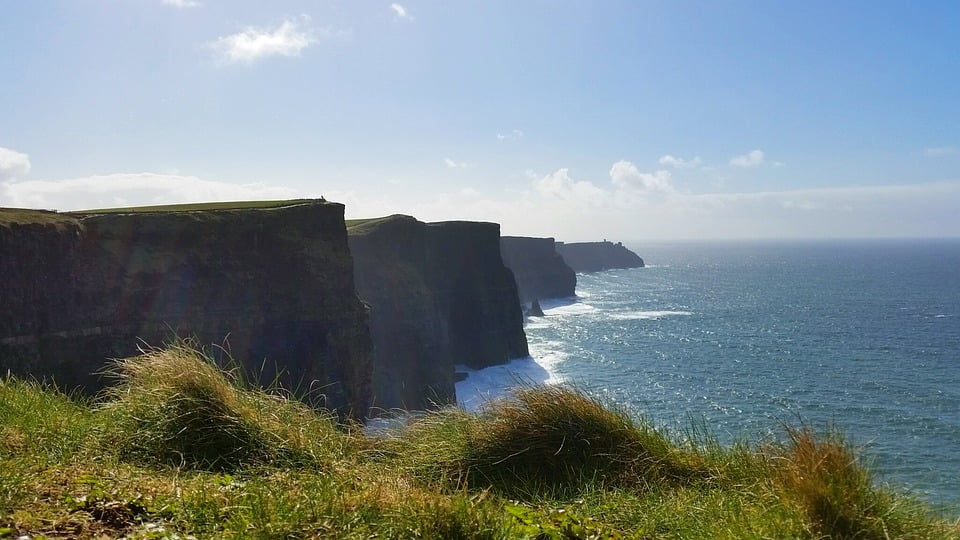 Visiting The Cliffs of Moher

With such a large number of visitors, some people may be concerned about the whole area being rather overcrowded. Although the Cliffs of Moher Visitor Centre will certainly be busy at popular times, those looking to get away from the crowds do not have far to go. This whole area is set within the “Wild Atlantic Way” recommended tourist route allowing visitors to drive along the Atlantic coastal roads passing through some very friendly places with plenty of hospitality on offer. Those who really want to get close to nature can even walk the cliff-top path and experience the Atlantic wind in their faces. Obviously care needs to be taken whenever walking on cliffs and it is always recommended to be prepared for wet weather. For the more adventurous, the waters beneath the cliff offer excellent scuba diving locations. Even the celebrated underwater naturalist Jacques Cousteau described these waters as providing the best diving in Europe. On the surface of the water, the pounding surf may present many dangers for small boats but the whole area has recently been discovered by the surfing community as offering ideal conditions for surfing with the Atlantic swell encountering shallows and forming large waves including 10 to 30 feet high “barrel” waves. But whatever initially attracts visitors to this area, it is almost certain that they will return not only to enjoy the wild and wonderful scenery but also for the friendly Irish hospitality. 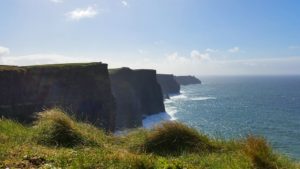