The Amazon is a vast forest. Most of it is in Brazil however significant areas of 7 other countries are all covered by this forest; Bolivia, Peru, Ecuador, Colombia, Venezuela, Guyana, Suriname and French Guiana. The forest covers the drainage basin of the Amazon river. One in ten of the world’s known species live in the Amazon rain forest.

The Amazon Rainforest, also referred to as Amazonia or simply The Amazon Jungle, is the world’s largest rainforest and, with an area of approximately 5,500,000 square kilometres, it represents over half of the world’s remaining rainforest. The Amazon rain forest occupies the majority of the Amazon Basin which is the whole area drained by the river Amazon and its tributaries spreading from the Andes mountain range to the west and the Atlantic Ocean to the east. The Amazon jungle is one of the least explored regions on Earth and the home of over 300 different indigenous and ethnic groups of people. It is estimated that as many as 50 such groups exist which have yet to make contact with the outside world. 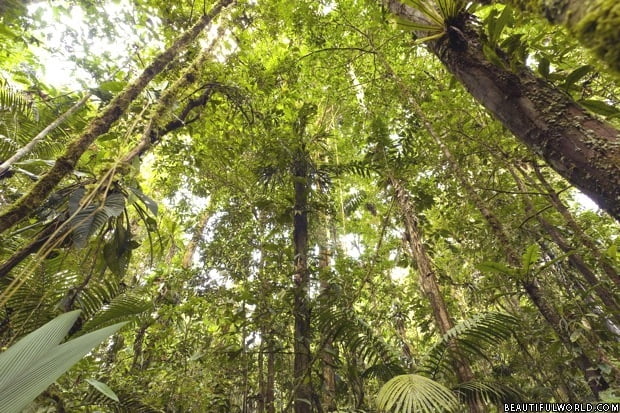 The majority of the Amazon Rainforest lies within Brazil but parts of it extend into Peru, Colombia, Venezuela, Ecuador, Bolivia, Guyana, Suriname and French Guiana. The forest itself is described as an Equatorial Moist Broad-Leaf Forest and, although there are inevitably some regional variations from natural savannah to swamp, this is an accurate description for the vast majority of this area.

The immense size of the Amazon Rainforest can be appreciated by examining a map of the region. It is roughly the same size as the United States but very little of it is inhabited. The rivers still form the major communications routes and, not unsurprisingly, areas of habitation are almost exclusively confined to riverside locations. The forested area is generally considered to be impenetrable jungle and few inroads have been made. Although several million people live in this area, almost all live in urban areas such as in the Brazilian cities of Belem and Maneus with many more in Peruvian towns. 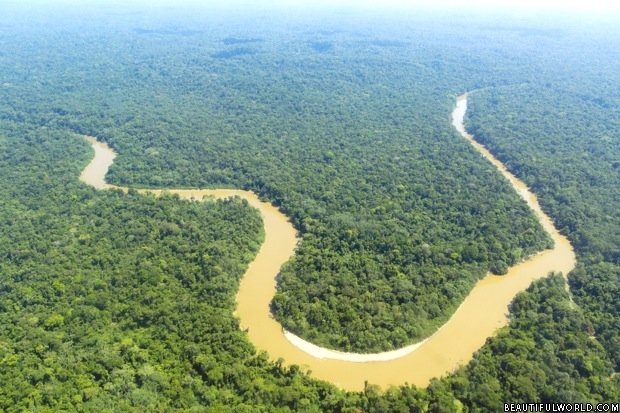 The Amazon rainforest is at least 55 million years old. In earlier geological periods, part of the South American landmass drained into the Pacific Ocean but the formation of the Andes mountain range effectively dammed this flow resulting in a huge lake or inland sea covering much of the South American continent. Millions of years of erosion allowed this lake to escape eastwards eventually discharging into the Atlantic.

The name Amazon is believed to have been given to this region by Europeans who engaged in wars with the indigenous tribes and were surprised to find that many of the native warriors were women leading to comparisons with the Amazon women warriors from Greek mythology.

The Amazon Rainforest represents over half of the world’s remaining rainforests.

The trees of the Amazon forest supply over a third of the world’s oxygen and also take up huge amounts of atmospheric carbon dioxide.

The River Amazon is the world’s second longest river but the largest in terms of water volume. Fresh water from this river flows out 200 km into the Atlantic Ocean and it is said that fishermen in the area were able to drink water from the sea long before land could be seen.

Amazon Rainforest dust, which gives the river its rust coloured appearance originates from the Sahara desert and is carried by the wind in huge quantities.

This is the most bio-diverse place on Earth and home to one in ten of all animal and plant species. 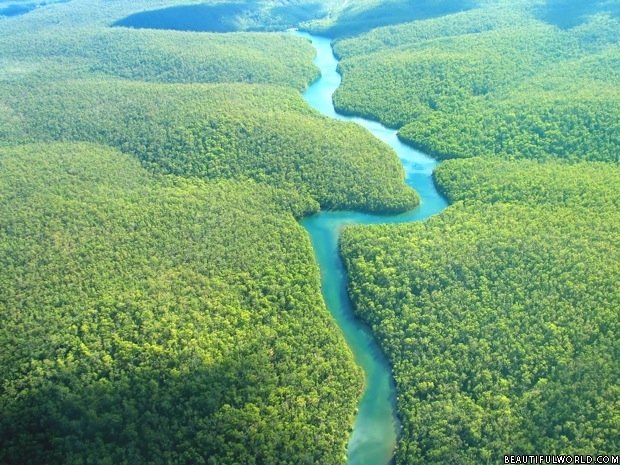 To list all of the animals found in the Amazon Rainforest would require a work of encyclopaedic proportions and even that would be incomplete as there are many species yet to be discovered or categorised. On average, it is estimated that a new species is discovered every four days. This area accounts for a fifth of the world’s fish and bird species, over 2.5 million insect species, and thousands of other animals.

The list of animals found in the Amazon jungle could go on and on. Aquarium fish enthusiasts may be interested to know that almost all of the popular freshwater aquarium species originate from this region. 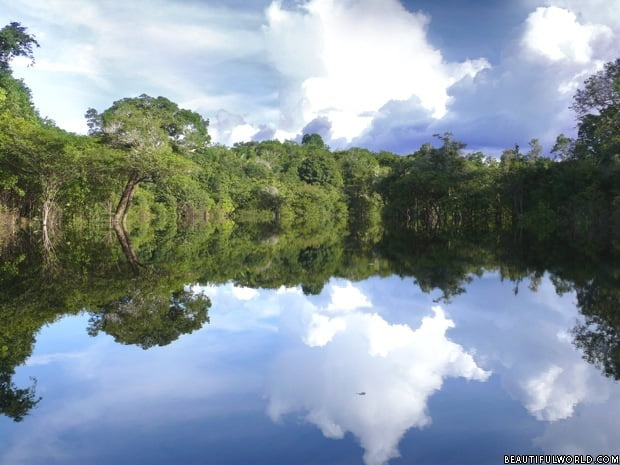 Just as with animal life, plant species are incredibly abundant in the Amazon Rainforest. Most regions consist of the classic rainforest structure with trees forming a dense canopy limiting light to the under-storey below. Most forests are dark places and many, especially temperate coniferous woodlands, are quiet and seemingly devoid of life but this is definitely not the case with rainforests which are teeming with life.

The trees themselves tend to be tall with leaves limited only to the uppermost section. The soil is thin providing poor anchorage and the successful tree species are those which have evolved to have trunks with supporting buttresses or mangrove-style “prop and stilt” roots emerging from the trunk and reaching down to the ground. Within this dark shady area, various shrubs grow almost always having very large leaves to capture what little light is available and below that at ground level fungi help with the decomposition of vegetable matter. Some very tall trees, such as the Brazil nut tree break through the forest canopy into the upper-storey or emergent layer.

A unique rainforest feature is that many specialised plants also grow in the under-storey area, utilising the forest trees for support. 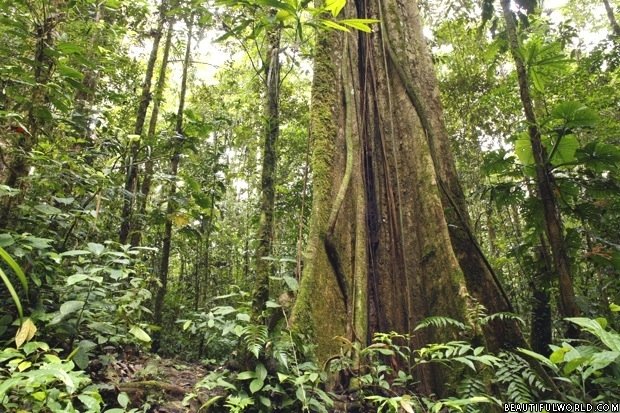 Many of these are epiphytes which, although they are attached to trees are not truly parasitic as they simply employ the trees as scaffolding as they usually climb in search of light and nutrients. Lianas, or climbing vines, also drape the canopy forming useful handholds for some of the canopy-dwelling monkeys. Most lianas begin life at ground level before reaching up for light but some begin in the canopy and grow downwards in search of nutrients at ground level.

The importance of the Amazon Rainforest cannot be overstated and it is often referred to as the lungs of the planet. Any intentional destruction of this unique habitat is therefore a matter of great concern. Deforestation has been taking place for many years and still continues albeit at a slower rate than previously. 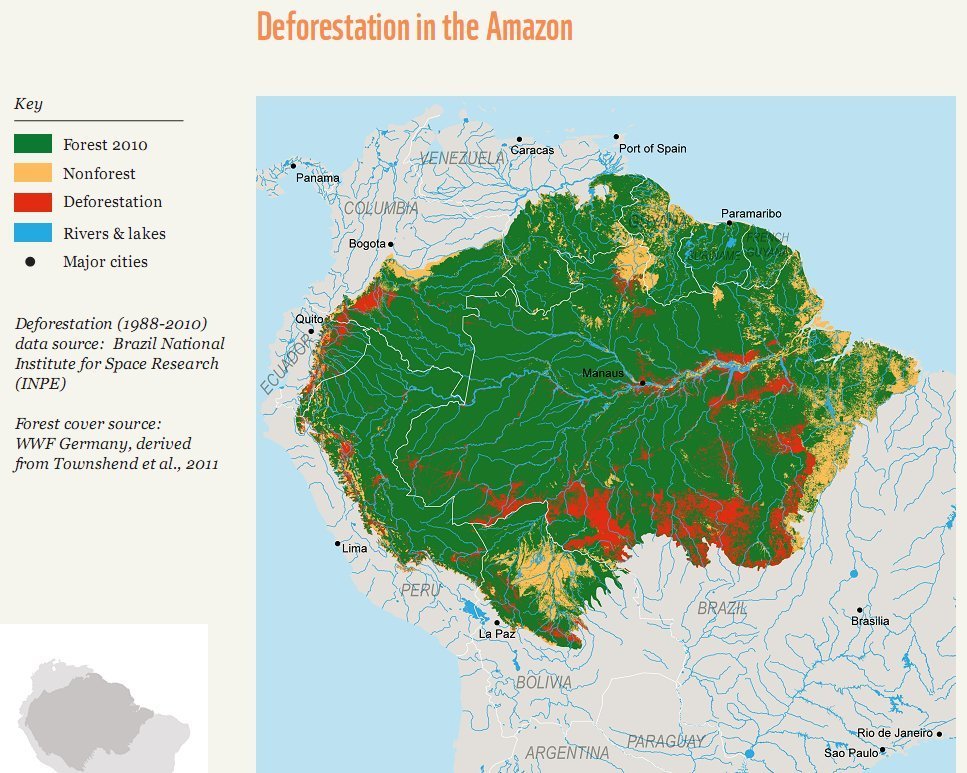 The major causes of deforestation have been logging for the timber industry, clearing of land for crop growing and the use of land for cattle farming. Environmental concerns have resulted in the strict control of timber extraction and farmers have been advised that increased areas of tree clearance do not result in increased profits. The growing of soya beans is a major business and until recently all forms of arable farming in the region have been hampered by the poor soil quality. The old way of dealing with this was by employing a “slash and burn” system of continuous tree clearance with the freshly cleared land used for a year or two after which time the soil would be depleted of nutrients. There are some very fertile areas where the soil has apparently been deliberately and systematically improved many years ago by the indigenous population. This soil is known as Terra Preta and typically contains charcoal, manure and bone. 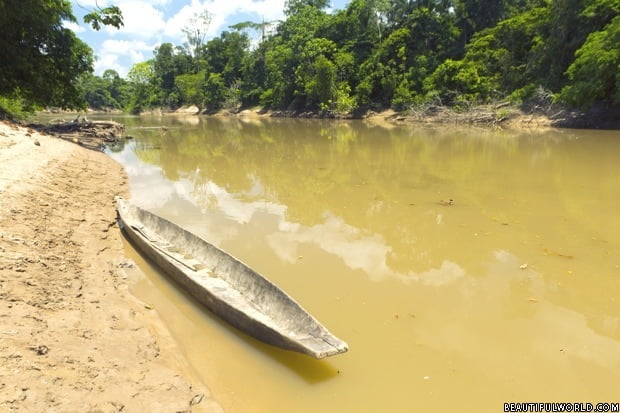 In addition to deliberate deforestation, it must be remembered that the very existence of the Amazon Rainforest depends on climatic conditions. At times of unsuitable conditions, such as during the last period of major global cooling in the last ice-age, the forest will shrink. It is believed that during the ice-age that the Amazon Rainforest not only shrunk to a fraction of its present day size but that it also became fragmented into many smaller forests each being completely isolated from the others allowing evolution to follow separate paths in a similar way that island species developed. This theory could explain the amazing levels of biodiversity found today. The Amazon Rainforest, as its name implies, receives very high levels of rainfall much of which is taken up by the plants and released back to the atmosphere by transpiration where it forms rain clouds completing the cycle. The temperature is fairly steady at between 22 and 34 degrees Celsius and humidity is very high. Cooler spells occasionally occur due to cold air coming from Antarctica. 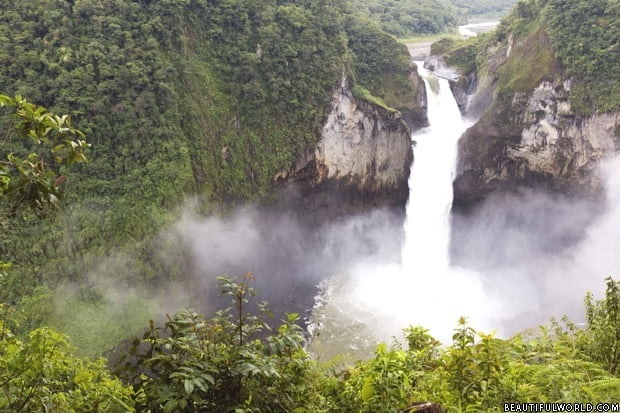 The Amazon Rainforest contains so much life that it would be easy to think that the loss of a few species would be of little consequence but millions of years of evolution have resulted in each species having very specific dependencies almost always involving other species. Sometimes this is as simple as animals eating plants or a predator/prey relationship but in other cases a mutually beneficial symbiosis exists or specific requirements for pollination. A simple example of this is the mighty Brazil nut tree. This thrives in the rainforest but has proved impossible to cultivate elsewhere due to the fact that pollination requires visitation by the euglossine orchid bee and when the seed pods have fallen from the tree, only the agouti has teeth sharp enough to break into the hard outer casing. This little rodent then carries the nuts away into a secret store providing ideal conditions for germination.

The Amazon Rainforest is one of the most remarkable places on Earth but, despite its immensity, its very existence is a delicate balancing act. Severe droughts in 2005 and 2010 caused significant damage and scientists warn that three successive years of drought could result in almost complete destruction. Climate change is usually blamed for the world’s changing weather patterns but global warming also poses a great threat with predictions that an increase of 3 degrees Celsius could result in a 75% loss of rainforest. 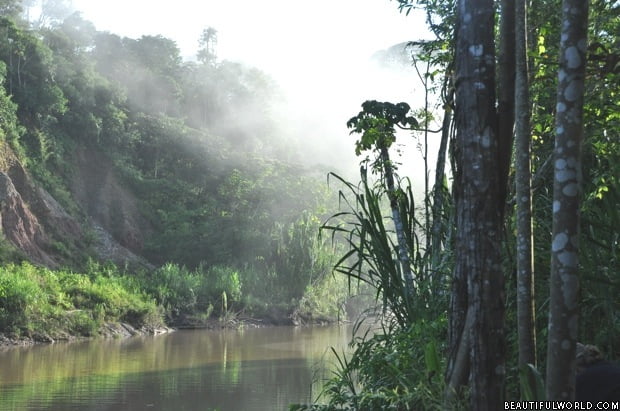 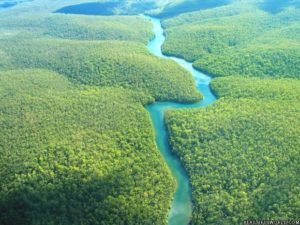