The very name Arabian Desert evokes a sense of mystery and romance. It is often portrayed as a forbidding wasteland devoid of life but throughout history it has retained a sense of fascination for travellers and is of course the backdrop for the fabulous Arabian Nights stories featuring such characters as Ali Baba, Aladdin and Sinbad. So what is the Arabian Desert really like? How does reality compare with the myth and magic?

The geographical location of the Arabian Desert is quite simple as it occupies almost all of the Arabian peninsular bounded by the Syrian Desert to the north, the Red Sea to the west, Arabian Sea to the south and The Gulf (also controversially known as the Persian Gulf or Arabian Gulf) to the east. It is actually composed of three individually named deserts, the largest of which is the Rub’al-Khali Desert located towards the south of the peninsula, a huge mass of sand stretching in a south-west to north-east direction. The central Ad-Dhana Desert forms a corridor linking the Rub’al-Khali to the northern An-Nafud Desert. On a geological time-scale, the Arabian peninsular is fairly young, having broken away from the main African continent about five or six million years ago. It is no surprise therefore that this desert has much in common with the Sahara desert and its sands have the same orange colouration due to the presence of iron oxides. 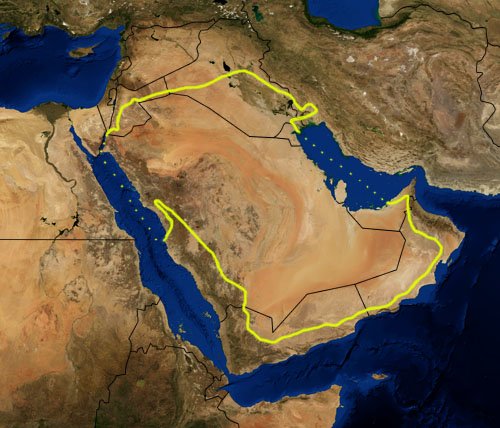 The Arabian Desert covers an area of approximately 900,000 sq. mi. which is over four times the area of France, western Europe’s largest country.

It is the second largest desert in the world with only the Sahara being larger.

It contains many mountains, the highest being Mount Al-Nabi Shu’ayb in Yemen at 3,760 m. Mount Al-Sham in Oman reaches 3,035 m and Mount Al-Lawz in the Saudi Arabian province of Hejaz is 2,580 m high.

The Rub’al-Khali desert has the world’s largest continuous stretch of sand.

Oil was not discovered in the region until 1936.

Although most of the Arabian Desert is in Saudi Arabia, it also extends to include Jordan, Iraq, Kuwait, Oman,UAE, Yemen and Qatar. 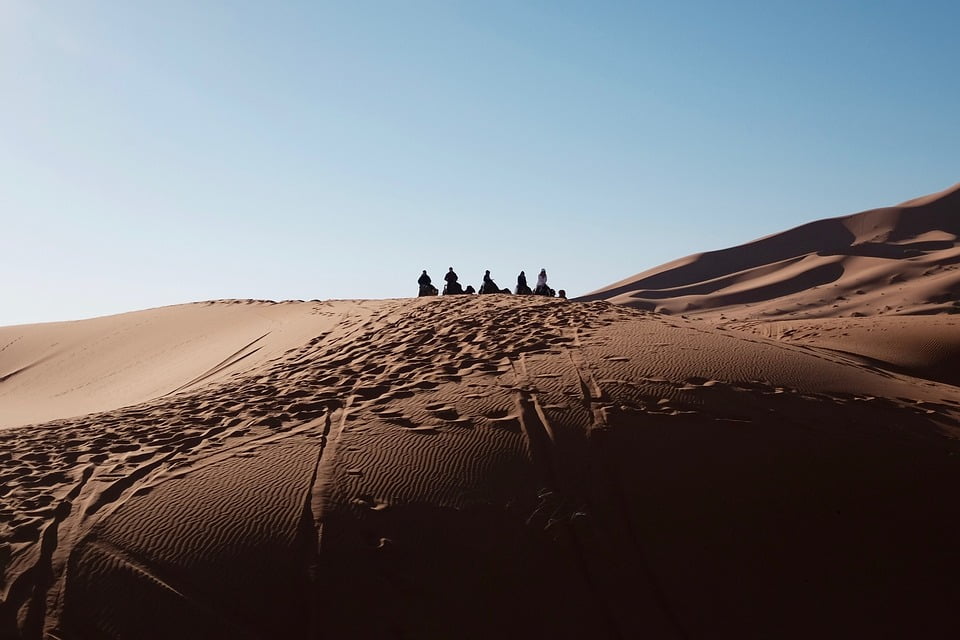 It will come as no surprise to hear that this desert is hot and dry but some people are surprised at the extreme range of temperatures. Daytime temperatures of 50 degrees Celsius are common but the area also has very low night-time temperatures sometimes leading to frosts and dew, especially in the relatively moist areas. With an annual precipitation of less than 33 mm, the area is classified as being hyper-arid and a true desert in every sense of the word. The dry powdery nature of the sands means that sand-storms frequently occur, sometimes in the form of frontal systems with gale force winds and at other times due to the seasonal desert winds, known as Shamals which occur from December to January and May to June. During these storms, the sand is normally only lifted a little way above ground level making visibility and travel difficult. Occasionally the sands may be lifted to a higher level by the action of Dust Devils which are whirlwinds of a long duration.

Where is the Arabian Desert located

If you want to visit the Arabian desert you can get an air arabia flight into Riyadh which is the capital of Saudi Arabia. You can then access the desert through one of the many dedicated Arabian desert tour and safari companies that are in operation.

In such a hostile climate, few plant species are able to survive and, in the Rub’al-Khali, only 37 types of plant have been recorded and, for the most part, much of this area is effectively completely devoid of vegetation. Some plants do however thrive, particularly around the oases and less arid areas. The adenium, or desert rose is one of the most famous and date palms are abundant and a useful source of food. Other commonly found plants include acacia trees, ghaf tree, orache (salt-bush), capers, juniper and alfalfa.

With such sparse vegetation, there are few grazing animals but in the past there were substantial numbers of gazelle species including the Arabian Oryx. The famous Arabian horses also hailed from this region. Striped hyenas and Arabian wolves also roamed this area but hunting has resulted in virtual extinction. Cape hares, caracals and red foxes can be found but probably the most instantly recognisable desert animal is the Arabian camel, or dromedary. The conditions are ideal for many species of snakes, lizards and geckos including the dhub (Egyptian uromastyx), horned vipers, cobras and monitor lizards. Insects abound in the form of ants, bees, wasps, moths and beetles, including the famous scarab beetles. Many spider species are present including the fearsome camel spider which grows to a size of 6 inches or more and often feeds on the blood of camels. It is notoriously aggressive and extremely fast-moving. Many bird species can be observed but few are permanent residents. These include vultures, buzzards, falcons, swallows and doves. 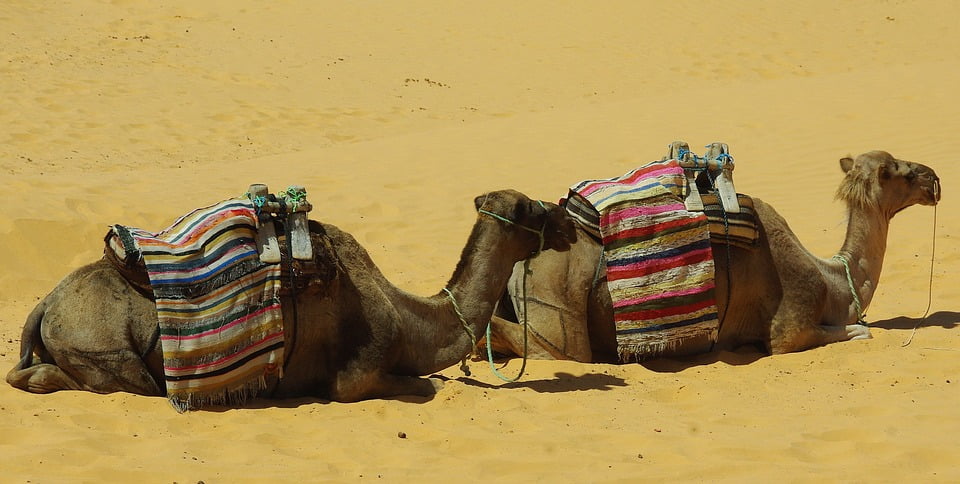 The Saudi capital city of Riyadh is sited within this desert as are various other townships and modern transportation makes the whole area much more accessible than in the past but surprisingly, this area has been inhabited for an amazingly long time and recent excavations have found evidence of human habitation as long ago as 2.4 million years ago. The Bedouin people are perhaps the best known of the desert-dwellers and for thousands of years followed a nomadic existence relying on the rearing of camels, horses and sheep along with some more permanent raising of crops at oases. Feuds between different tribes were commonplace often concerning grazing rights but today most descendants of the Bedouins live more settled lives often around the oases.

So the Arabian Desert is a genuine desert in every meaning of the word. Its immense open spaces and wind eroded mountains endow it with some of the most spectacular scenery to be found anywhere in the world. Although much of it comprises an ever-changing sea of dunes, there is much topographical variation from the 2000 m Yemen plateau to the 500 mi cliff-face of the Tuaiq escarpment and the treacherous quicksands of Umm al Samim, this is a truly wild and wonderful place. So does it live up to its fabulous reputation? … Absolutely! 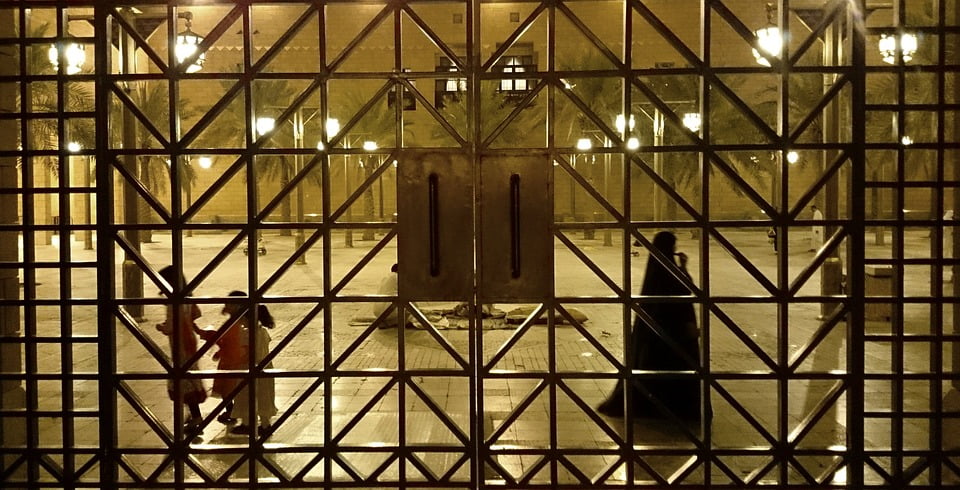 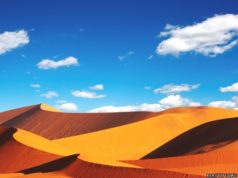 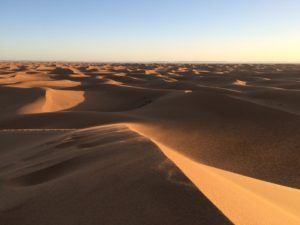