The central American country of Costa Rica must rank as one of the greatest holiday destinations for any nature lover and this mountainous, forested land has an incredible range of biodiversity being the home to no fewer than 52 species of hummingbirds and 500 types of orchids. One attraction however literally towers above all of the rest this being the mighty Arenal Volcano. A trip to the volcano features highly on most visitors’ lists and this is one of the few locations where it is possible to view an active volcano. Much of Costa Rica’s land lies within specially protected reserves or nature parks and the Arenal Volcano is in the 29,692 acre Arenal Volcano National Park. It shares the park with its now dormant neighbour, the Cerro Chato Volcano. The park features various trails through mainly forested terrain leading to viewing points.

The Arenal Volcano is the youngest in Costa Rica being less than 7,500 years old. It is classified as being a stratovolcano meaning that it forms the typical conical shape. For many years it had been considered as being a dormant volcano with no historical records of eruptions ever occurring. This sleeping giant however awoke from its slumbers abruptly on 29th July 1968 with a huge series of eruptions resulting in the destruction of nearby towns and the loss of 78 lives. For decades following the 1968 eruption, the volcanic activity continued with frequent smaller eruptions and lava flows. Since 2010 the activity has subsided and no new lava flows have occurred. It is however an undisputed fact that this is still an extremely active volcano likely to erupt violently at any time. The height of the volcano varies with activity but is currently around 1,633 m above sea level.

Access to the Arenal Volcano National Park is via the main entrance which can be found from the main road leading from La Fortuna to Lake Arenal. It is well signposted and a track on the left hand side, when travelling from La Fortuna, leads to the main entrance and car parks. The currency of Costa Rica is the Costa Rican Colon (plural Colones) but the park entrance fee is frequently advertised as currently being $15.00 US Dollars per person. US Dollars are widely accepted throughout Costa Rica, especially in tourist areas, but change will usually be given in Colones. Most people seem to agree that Costa Rican currency is the most beautiful in the world with banknotes being exquisitely illustrated with pictures of the country’s wildlife. Another rather charming fact is that, due to previous periods of runaway inflation, the notes are of very high denominations. As a rough rule of thumb, 1,000 CRC has a value of around $2.00 USD. This of course means that anyone with $2,000 USD is a Costa Rican millionaire! The park entrance fee also includes access to the nearby Arenal Lake which also has some great vantage points for viewing the volcano.

A visit to this park is more about sightseeing than hiking and the trails in the park are generally considered to be easy. There are two main trails leading to viewing areas, these being the Sendero Colada and the Tucanes. These are 3.4 and 2 km in length and the pathway is good. Trails lead partly through the rainforest and notable features are the giant ceiba tree and the tall grasses. Due to the nature of these trails, much of the area’s wildlife may remain out of sight but may occasionally be spotted and heard.

The main trails culminate at a viewing area at the foot of the volcano but a spectacular view is far from guaranteed. The volcano is often shrouded by mists and low clouds. The best time of day to get a clear sighting of the volcano is said to be early in the morning but of course weather conditions are a major consideration. Anyone hoping to get the chance of climbing this mighty volcano will be disappointed to learn that, due to safety concerns, it is completely out of bounds and illegal to attempt such an ascent. The park’s other volcano, Cerro Chato is however usually rather more accessible. Although the park’s wildlife may not always be apparent, it is still there and visitors are strongly advised to stay on the paths. There are many creatures including highly venomous snakes and dart frogs which should really be given a wide berth. Mosquitoes are another problem and insect repellent and suitable clothing are essential. Thankfully, malaria is not a problem in this part of the world. Guides are available and are said to be extremely informative but can be rather pricey.

Being in the tropics, it will come as no surprise to hear that the weather here is likely to be hot. Much of the park is classified as tropical rain forest meaning that it is also wet or humid. It is at its driest during the months from December to April with the rainy season being regarded as running from May to November. Heavy rainfall can however be encountered at any time so suitable clothing should always be available.

This area is a major tourist destination and as a result there is no shortage of accommodation at Arenal and the nearby town of La Fortuna. These range from inexpensive hostel style premises to top luxury hotels with plenty of choice in between. The Arenal Observatory Lodge is the only accommodation within the national park and this is a rustic-style lodge offering some great views. Camping is not allowed within the park but camping/glamping facilities are available at La Fortuna. Operators offering Costa Rican holidays will invariably have many suitable premises close to the Arenal Volcano.

Costa Rica is home to an incredible range of wildlife and many of the country’s most famous animals are resident or may visit the Arenal Volcano National Park. It must be said however that there are better places to view some of the more elusive animals. Visitors to the park will certainly see many birds and hear monkeys and other animals but should not expect to come across jaguars and ocelots. There is always the chance of spotting a sloth or deer but many animals are very secretive staying out of sight. Much of the fun is in looking carefully and seeing creatures that most people simply pass. 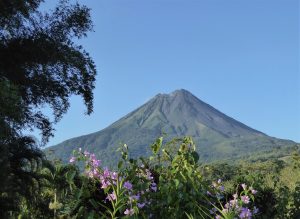