The Great Barrier Reef is one of world’s most incredible ecosystems and it comprises of over 2,900 individual coral reefs along with around 900 islands. It stretches a distance of around 1,400 miles in the Coral Sea off the coast of Queensland Australia. It is simply immense and fans of the Great Barrier Reef are always keen to point out that its is the largest living thing on Earth and it can even be seen from outer space. A more precise description would be that it is the largest structure due to living organisms as only a small proportion of the coral is actually alive growing on the skeletal remains of its ancestors. Everything about the Great Coral Reef is amazing but perhaps the most amazing thing is that it exists at all. A great natural barrier, it is often regarded as being impassable by sea but there are safe channels through to the inner waters. It was even crossed by Captain Bligh following the mutiny on the Bounty but Captain Cook was less fortunate and ran aground here. In total 1,600 shipwrecks have been recorded along the length of the Great Barrier Reef.

The Great Barrier Reef is huge – it stretches for over 300km along the cost of North West Australia between the town of Bundaberg North to the Torres Strait. The map below marks these southern most and northern most points.

Origins of The Great Barrier Reef

The animal group known as corals are an extremely fussy lot and will only thrive under a very specific set of circumstances. For a start the temperature must be suitably warm so corals will only be found at tropical latitudes. They also need clean water containing plenty of food. Sunlight is also required so they will only grow at depths of less than 150 metres and they will not grow above sea level. With such constraints, it is hard to understand how such a massive structure could ever have come about. It is estimated that the current system of reefs is only about 6 – 8,000 years old but it is founded on a much older coral structure from around 20,000 years ago. Even this is very recent on a geological time-scale and there is evidence that ancient coral reefs existed in this area as much as 600,000 years ago. Since that time much has happened including continental movement and greatly changing sea levels and the corals have simply continued to occupy their very specific niche while the world around them continued to change. The result has been that, as islands have come and gone with the changing sea levels, the corals have been able to colonise wide areas sometimes turning rocky islands into coral cays and growing as reefs around some of the high islands. The changes continue to this day and the success or failure of such a delicate ecosystem is a precarious balancing act. 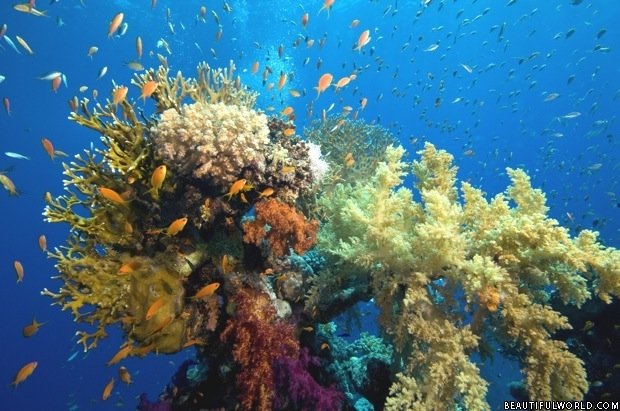 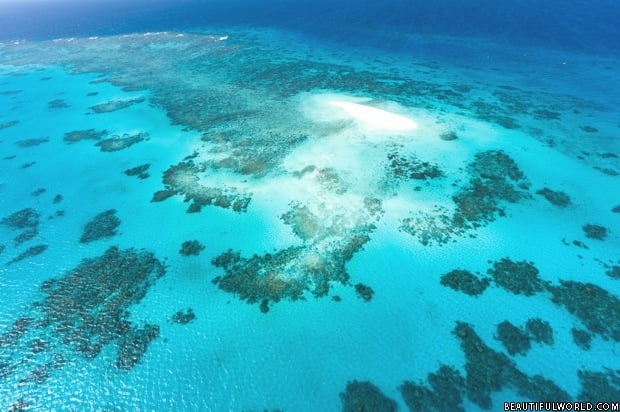 Looking at a map of the Great Barrier Reef reveals not only its extent but also the huge number of islands. Some of these are fairly large such as the Whitsunday Islands while some others are low coral cays. There are around 900 islands in this part of the Coral sea with a further 150 inshore mangrove islands. There are over 2,900 individual reefs and the whole area is regarded as providing some of the best conditions in the world for scuba diving and snorkelling. Tourism forms a major part of the local economy with the Cairns region and Whitsunday Islands forming the main bases for visitors. The whole of the Great Barrier Reef is extensively mapped and the area can be further examined using satellite images and Google have included underwater images of the Great Barrier Reef as part of their “Street View” programme which can even be viewed in 3D. 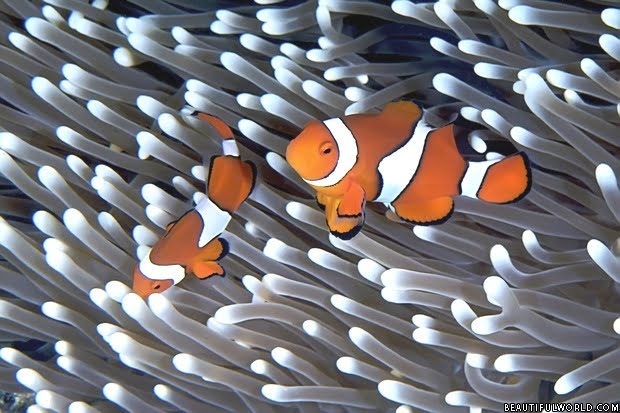 Protection of the Great Barrier Reef 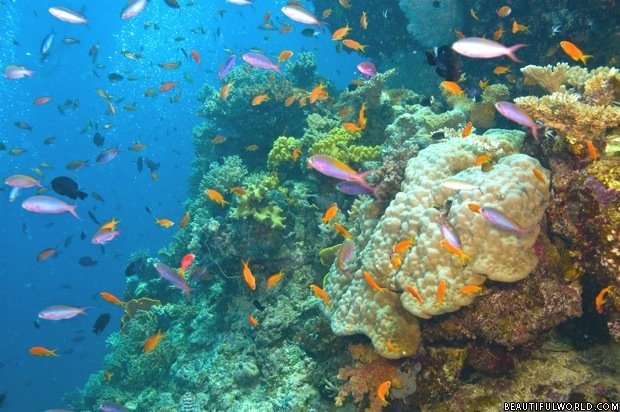 Ecology of the Great Barrier Reef

Most people are attracted to this region by the huge range of wildlife on display. Many species of marine mammals can be seen including dolphins, porpoises, dugongs and various species of whales. There are over 1,500 species of fish, 17 species of sea snake and the area is visited by six of the world’s seven species of sea turtles. There are around 125 species of sharks and rays and salt-water crocodiles are regular visitors although they live in nearby mangrove swamps. Over 5,000 species of molluscs can be found and of course many different types of coral. Sea-grasses provide much of the vegetation providing both food and harbourage for some of the reef’s residents. 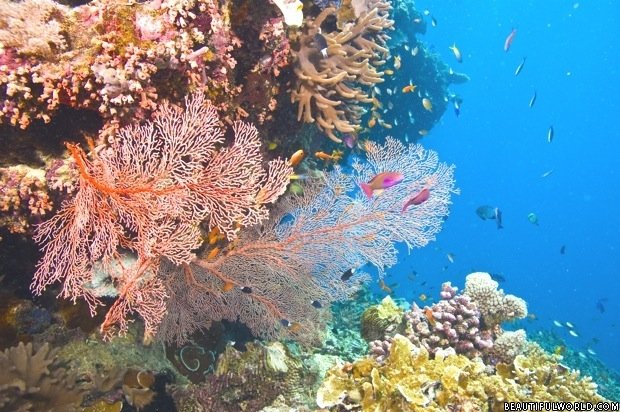 This is a prime area attracting visitors from around the world. Most trips centre on aquatic activities such as scuba diving or snorkelling but there are many other ways to view the area’s natural wonders such as by air or boat trips with glass-bottomed boats being a popular option. There is no shortage of expert help but safety is always of paramount importance and visitors must always respect the strict environmental conditions applying to the structure and wildlife of the reef. 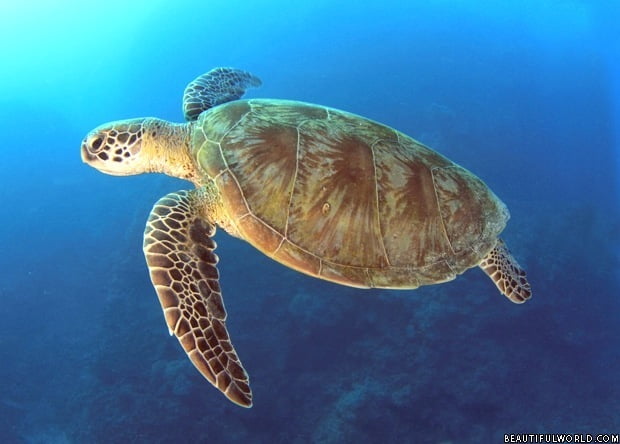 Threats to the Great Barrier Reef

All coral reefs are regarded as endangered due to their very specific requirements and the Great Barrier Reef is no exception. Whilst it is perfectly normal for the living species, including the coral, to change and develop along Darwinian principles, there are concerns that some changes may be occurring at such a rate that the delicate ecosystem will be unable to adequately respond. One such threat could be the phenomenon of ocean warming which many people regard as being connected with global warming. Corals are unable to deal with thermal stress and, following high sea temperatures in 1998, 2002 and 2006, a great deal of coral bleaching occurred exposing the coral to damage and disease. Another major concern is the acidification of the world’s oceans due to the rising levels of atmospheric carbon dioxide. All calcium based marine life, including coral, is particularly vulnerable. There are also more local threats such as the physical damage to the coral caused by anchors or fishing. Overfishing can also upset the delicate balance and fishing is carefully controlled. Water pollution also poses a threat and comes both from the activities of visitors to the reef and from the run-off of pollutants from farmland. The draining of coastal wetlands further aggravates such problems. Some of the effects are complex and, as an example, high levels of agricultural nitrates causes an increase in algal growth. This in turn benefits the crown-of-thorns starfish which goes on to destroy large areas of coral. 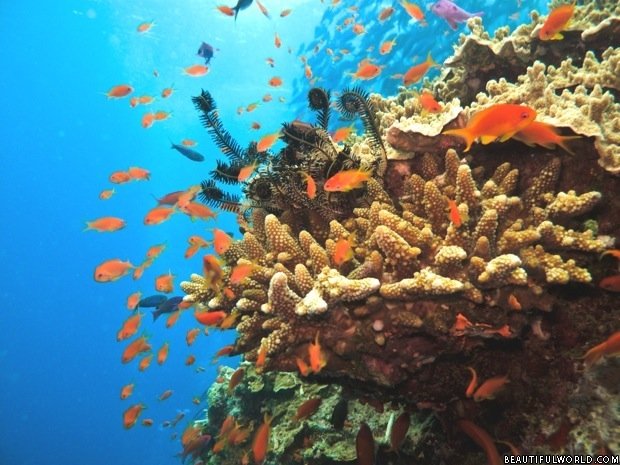 The Future of the Great Barrier Reef

There is no denying that the Great Barrier Reef will continue to change as it always has. The pessimists are forever questioning whether the Great Barrier Reef is dying but simple observations show that it is as vibrant as ever. Since coral first appeared in this region 600,000 years ago the sea levels have changed by more than 200 feet, continents have moved and islands have appeared and disappeared but the coral is still here. The Great Barrier Reef has continued to defy all kinds of changes and will doubtless continue to do so. It has been described as being one of the seven natural wonders of the world and few would disagree with that. 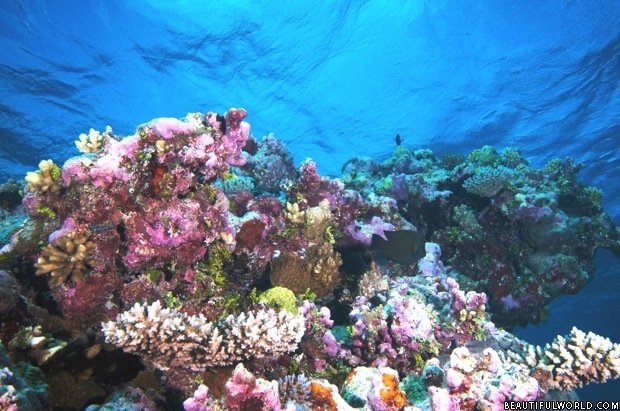 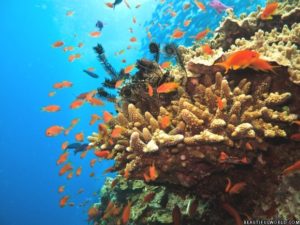