K2 is the second highest mountain in the world, with a peak rising 28,251 feet (8611m) above sea level. Situated on the border of Pakistan and China, it is commonly known as the ‘Savage Mountain’ due to its difficult ascent and high fatality rate. The first successful ascent was by an Italian expedition in 1954, though not every climb since has been as successful. In fact, a quarter of those attempting to climb K2 have died as a result of their efforts.

So just where is the K2? The K2 Mountain is actually in 2 countries (China and Pakistan) it is part of the Karakoram mountain range that straddles the Pakistan-China border.

K2 is a famous mountain (28,253ft/8612m) in the Karakoram mountain range, second only to Mount Everest in the world in terms of height above sea level.

The K2 mountain is also very prominent; souring 13,179 feet (4017m) above it’s surrounding terrain – ranking it the 22nd most prominent mountain in the world (more prominent than Everest).

K2 was originally named as such by a British surveyor named T.G. Mongomerie back in 1852. The ‘K’ was in reference to the Karakoram mountain range, and the ‘2’ referring to the fact that it was the second peak recorded in the region.

K2 mountain remains the most publicised name to this day, though the mountain is known under a variety of different monikers. For instance, the Chinese call it Qogir (meaning, ‘Great Mountain’), the Tibetans, Chogori (meaning, ‘Large Mountain’) whilst others refer to it as Mount Godwin-Austen after Henry Godwin-Austen, an early explorer of the mountain range.

In 1986, an expedition led by George Wallenstein incorrectly labelled K2 as the tallest mountain in the world; taller than Everest. One year later, a corrective measurement was made, though by that point a number of news outlets and publishers had cited K2 as the world’s tallest.

Though Everest is in fact 800 ft. (244m) taller, there can be no argument that K2 is on another level in terms of danger, with a fatality rate of approximately 25% compared to Everest’s minute in comparison 5%. Furthermore, no person has ever attempted to ascend K2 in winter, meaning the fatality rate during this season would likely far surpass the current 25% experienced.

The Italian climber, Ardito Desio, led the first successful ascent of K2 mountain in July 1954. However, it was a controversial climb, with only 2 members of the team actually reaching the summit.  Since that date, Wanda Rutkiewicz from Poland became the first woman to successfully climb the K2 peak in June 1986, whilst the Spanish climber, Carlos Soria Fontan become the oldest successful mountaineer to date, reaching the peak at age 65, in 2004.

In contrast to the increasing commerciality of Mount Everest, K2 remains a challenge that represents the historical spirit of climbing. However, the level of skill required and the tremendous danger present put the mountain out of reach for all but the most technically advanced, determined mountaineers. 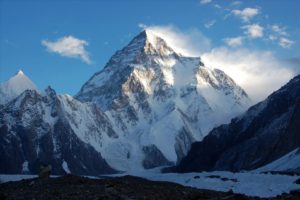