The Grand Canyon is a majestic steep-sided canyon that attracts an incredible 5 million visitors per annum. Located in the southwestern U.S. state of Arizona, it has an average depth of 1220 meters (4000ft), and is 277 miles (445km) long. The South Rim of the Grand Canyon is the most frequently visited, thanks to its breathtaking views of both the canyon and the Colorado River far below. Interestingly, the Grand Canyon National Park is home to several distinct ecosystems, ranging from desert to forest land. These various ecosystems serve as an ecological refuge for many plants and animals, including many endangered species.

Though not the deepest, longest, or widest canyon in the world, the Grand Canyon is renowned for its beauty and awe-inspiring size. The incredible 277-mile long rift divides the Colorado Plateau, forming part of the Colorado River Basin.

How was the Grand Canyon Formed?

Erosion from the Colorado River is responsible for the formation of the canyon. Many estimates suggest that the process began about 6 million years ago. However, a recent study indicated that it might have begun sooner than previously thought – as early as 17 million years ago! Fascinatingly, the walls of the canyon offer an unparalleled representation of Earth’s different geologic phases. In fact, the rocks found in the walls of the Grand Canyon are believed to be approximately 1/3 of the age of the Earth itself. 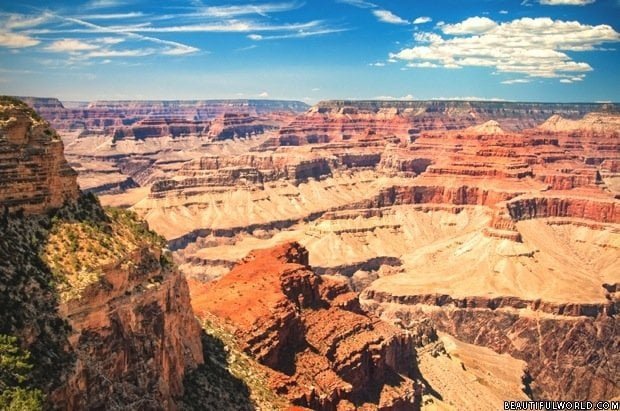 The average elevations of the Colorado River, South Rim and North Rim are 2200 ft. (above sea level), 6800 ft. and 8000 ft., respectively. This wide range in elevation gives rise to the Grand Canyon’s immense biodiversity. Five of the seven life zones can be found in Grand Canyon National Park, as well as three out of the four main types of desert. As a result, the park boasts over 1500 native plant species, 355 species of birds, 89 mammalian species, 47 species of reptiles, 9 species of amphibians, and 17 species of fish.

The park is also home to numerous endangered plant and animal species including the desert tortoise, two species of leopard frogs, the bald eagle, American peregrine falcon, and the bighorn sheep, just to name a few. 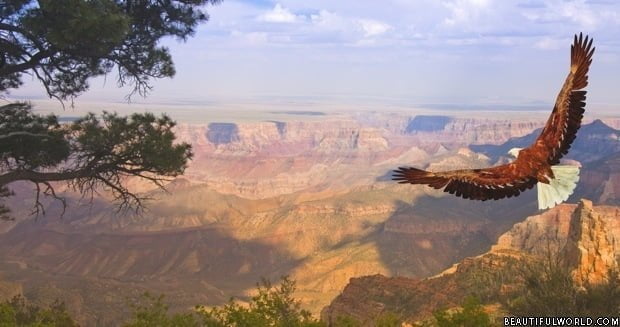 John Wesley Powell, a US soldier/explorer who lost his arm in the Battle of Shilo, was the first to use the name, ‘The Grand Canyon’, in 1869, after it had previously been known as either the ‘Great Canyon’ or the ‘Big Canyon’.

Of the Grand Canyon, he wrote, “The wonders of the Grand Canyon cannot be adequately represented in symbols of speech, nor by speech itself. The resources of the graphic art are taxed beyond their powers in attempting to portray its features. Language and illustration combined must fail.”

In 1919, the Grand Canyon was granted National Park status by President Woodrow Wilson, making it the 17th national park established within the United States.

The rock at the bottom of the Grand Canyon (Vishnu Schist) is estimated to be just under 2 billion years old, whilst the rock on the upper rim (Limestone) is approximately 230 million years old.

Just 10 miles separates the North and South Rims of the Grand Canyon, though the hike is typically at least a 2-day journey, as hikers must trek down one side to the Colorado River, and then make the ascent up the other side.

The Federal Aviation Administration (FAA) was created in 1958, in response to a horrific incident involving two passenger planes that had both requested permission to fly into the Grand Canyons airspace on June 30, 1956. The planes collided, killing all passengers on board. 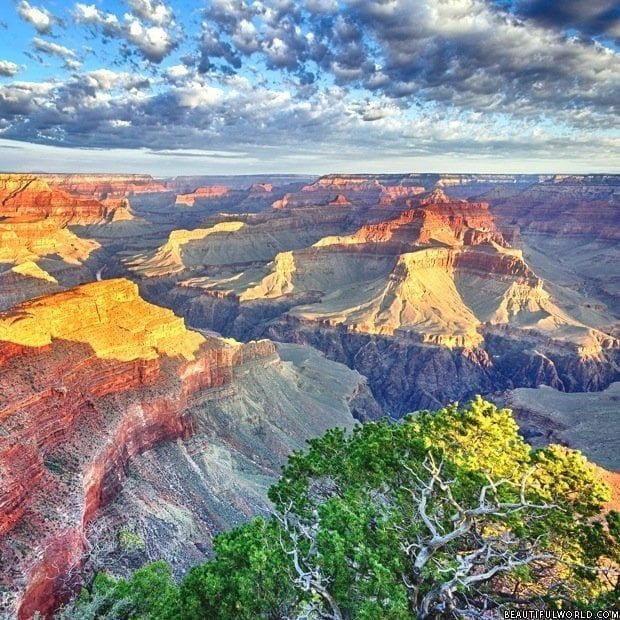 The best time of year to visit the Grand Canyon is during either spring or fall, when hiking conditions are ideal, and visitor numbers slightly lower. That is not to say that you should disregard a summer trip to the canyon by any means. However, high temperatures (exceeding 100 degrees Fahrenheit) do not provide ideal hiking conditions and large crowds will be present as it’s the peak tourist season. The winter brings harsh cold (sub-zero) and the chance of heavy snowfall, which may prevent access to either rim. In fact, the road to the North Rim is closed between late-October and mid-May each year. 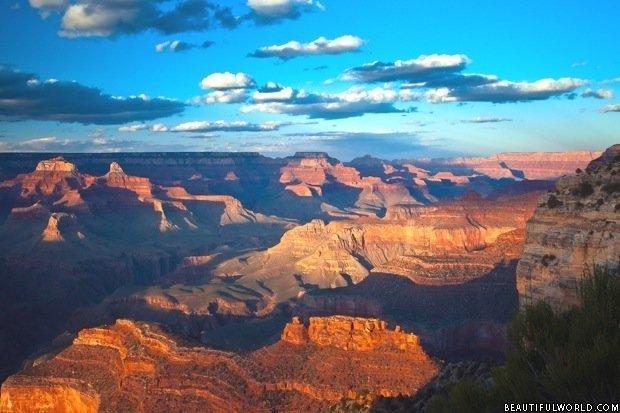 Where to stay at the Grand Canyon

There are many lodging options available at both the North and South Rims of the canyon. You will need to book well in advance, particularly for the most popular spots, which can be booked immediately upon release for accommodation in the summer months. For lodging information, go to the National Park Services Grand Canyon lodging page. 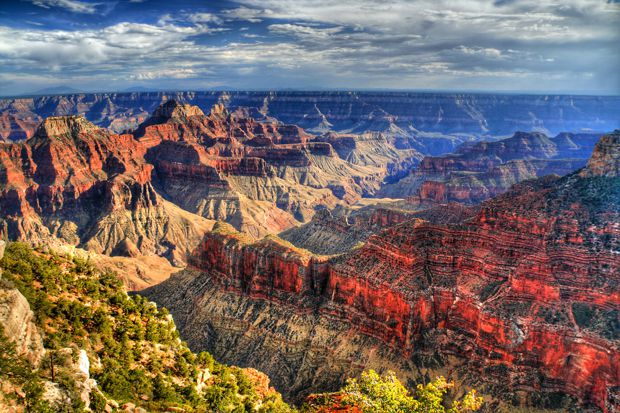 How to get to the Grand Canyon

Fly into either Las Vegas or Phoenix International airports. From here, you can hire a car, or alternatively, book yourself onto one of the many coach tours on offer. The drive to the Grand Canyon from either one of these airports takes approximately 5 hours. 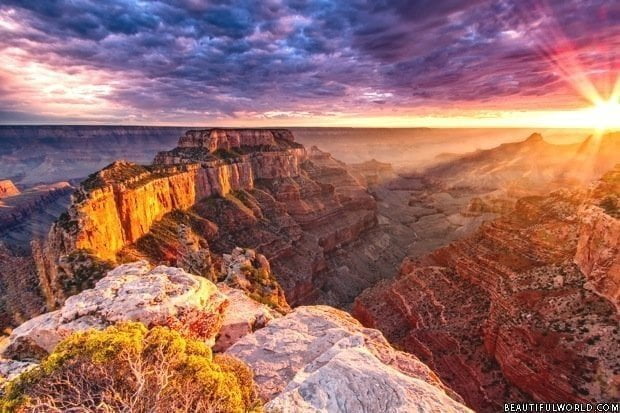 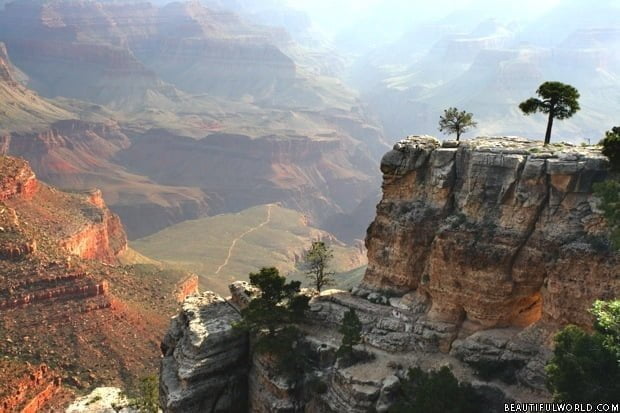 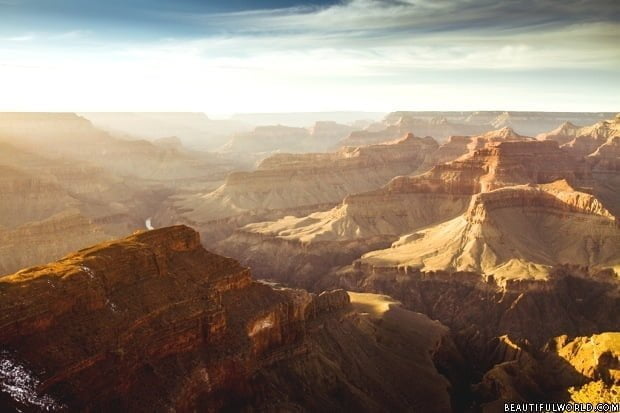 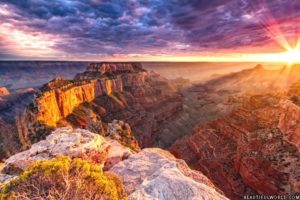