For many, the river Tees is a symbol of the industrial north-east but the river rises high up in the North Pennines following a course of around 85 miles before reaching the North Sea. In the area known as Upper Teesdale, the river is at its most scenic varying from a fast-flowing mountain watercourse to a meandering river. On its descent, the Tees encounters a large outcrop of volcanic rock known as Whin Sill. This runs across northern England from east to west and much of Hadrian’s Wall was built along the top of this natural escarpment. As the river traverses Whin Sill, it drops by around 22 metres (71 feet) as one of England’s most spectacular waterfalls, High Force.

The name is derived from the Nordic word “foss” meaning waterfall. Although sometimes described as England’s largest waterfall, it is not the highest. Hardraw Force in North Yorkshire has a single uninterrupted drop of 30 metres and Cautley Spout in Cumbria has a total drop of 180 metres. It does however have the largest volume of water in a single drop.

Three different types of rock are present at the waterfall with the hardest, dolerite (or whinstone) at the top and softer sandstone and limestone beneath. The lower, sedimentary, rocks were formed around 330 million years ago during the carboniferous period but the upper rocks are of igneous origin formed around 295 million years ago. The gorge through which the river runs below the falls, was mainly sculpted by the torrential melt-waters following the end of the last ice age.

The most popular way to visit high force is from the north side of the river and, just a few miles from the small market town of Middleton in Teesdale, close to the High Force Hotel, a well-maintained scenic path leads down to the waterfall. Although the sound of the river is always present, the falls remain largely out of sight until the last turn of the path where the the true size and power of the waterfall can be experienced. For the more intrepid, it is also possible to visit the top of the waterfall but great care is needed and in the past there have been fatalities at this site. Access to the top of the fall is not always available. The deep plunge pool is also extremely dangerous and the waters are not suitable for swimming. A small charge is made for using this path. The surrounding lands form part of the Raby Estate. High Force is situated in the North Pennines Area of Outstanding Natural Beauty.

High Force is worth visiting at any time of the year its character changing with the seasons. After heavy rainfall, the river may be running in full spate giving a spectacular display but the volume of water is now more controlled than in years gone by since the construction of the Cow Green Reservoir further upstream, just above Cauldron Snout which is another impressive Tees waterfall being more of a long cataract and, with a length of 180 metres, England’s longest waterfall. Some old photographs of High Force show two waterfalls but the smaller flow now only rarely occurs. This area is noted for its winter weather and, in some years, the falls freeze giving the whole scene a cathedral-like splendour. Summer and autumn are popular times to visit allowing the woodlands to be fully appreciated and the river to be seen at its most tranquil.

Most rivers seem to have acquired magical or mythical occupants and the upper Tees is no exception. In this section of the river, a hag known as the High Green ghost is said to inhabit the waters and is reputed to grab the ankles of those who come too close to the waters’ edge and pull them under the water. Naughty children are said to be particularly at risk and so it would not be surprising if the children around Middleton in Teesdale turn out to be exceptionally well behaved! This may be the same spirit as Peg Powler, reputed to have lived in the part of the river now forming the Cow Green reservoir. The Cauldron Snout falls have another sad spirit known simply as the singing lady. This is generally believed to be the ghost of a Victorian farm girl who threw herself into the river following a failed love affair with a local lead miner.

High Force really needs no magical enhancement however and this is a place never to be forgotten. Spray from the waterfall usually gives rise to rainbows and the sheer power of the waterfall is awe inspiring. In comparison to some of the world’s greatest waterfalls, High Force with a drop of a mere 22 metres is really nothing special but first-time visitors are often unprepared to find such a magnificent display in such unlikely surroundings. As a popular tourist attraction, it can be busy at times but a dedicated car park is available next to the High Force Hotel and there are toilets, a gift shop and a picnic area. The pathway to the falls is fairly easily managed but may present some problems for those with mobility issues and there are some steps making it generally unsuitable for wheelchair users although the falls can be viewed from a point before the steps. For those prepared to do a little more walking, High Force can be reached by setting off further downstream at Low Force or upstream from Cow Green reservoir and Cauldron Snout. The popular pathway is normally open all year with the exception of Christmas day but may be closed for safety reasons during periods of particularly inclement weather. Other facilities such as the gift shop and toilets are likely to be closed during the November to Easter low season.

High Force may or may not be regarded as England’s largest waterfall but it is certainly big and a spectacular sight on any day of the year. 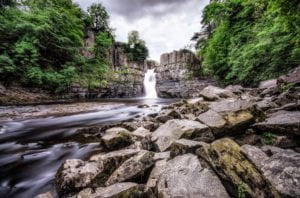