As the name suggests, the park’s most distinctive feature is its giant sequoia trees, chief among these being the General Sherman tree, which is considered to be the largest tree on the planet by volume. Sequoia National Park shares its borders with Kings Canyon National Park, making for a vast area of unbroken nature and wildlife. The boundaries of the park can be clearly seen on a Sequoia National Park map.

The vertical relief of the park covers almost 4,000 metres from lowest to highest point, making it one of the more breathtaking sites in the United States.

Following legislation signed by President Benjamin Harrison, the park was established in 1890 with the primary goal of protecting the giant sequoias that grew there from logging. It was the second national park created in the US, and has been administered jointly with neighboring Kings Canyon National Park ever since the Second World War. It is also the first US national park created to protect a living organism.

Protecting the trees required more than signing some paperwork, however. Between 1891 and 1913, US Army Cavalry troops were tasked with protecting the area. They would be stood down to be replaced by a civilian administrator, Walter Fry, in 1914, and the National Park Service would be established a couple of years later in 1916.

During the military’s watch, Captain Charles Young oversaw the completion of the road into the Giant Forest, allowing the “big trees” to be accessible by wagon for the first time. The growing popularity of automobiles would lead to significantly increased visitations by the late 1920s.

Improved access to the park—coupled with increased interest from visitors—soon led to the creation of amenities, such as a wooden staircase leading to the top of Moro Rock. In the 1930s, a concerted effort to improve trails, camp grounds, and facilities was made.

Over the years, the park has grown to encompass around six hundred and thirty square miles, 97% of which is designated and maintained as wilderness. Over one and a half million people visit the park each year.

Though the world is far from what was envisaged all those years ago in 1890, the basic purpose of the park remains unchanged—to protect and preserve these beautiful regions for future generations to enjoy, just as past generations have.

In September 2020, the park was partially closed as a result of the Sequoia Complex wildfire. The fire was one of many wildfires throughout California at this time, and resulted in the estimated loss of hundreds—perhaps over a thousand—sequoia trees, as well as thousands of other mature trees. It also resulted in the destruction of most of the Cedar Slope community. The fire was 100% contained, and the park has returned to normal with regards to visitors.

As you might expect from such a large region with such varied terrain, there can be quite a lot of variation in Sequoia National Park weather. For instance, you can expect to experience as much as twenty to thirty degrees variation as you head up or down one of the many changes in elevation.

For the lower elevations around the park, you can expect hot, dry summers, and mild, wet winters. The rainiest period runs from January to May, and rain during the Summer is quite rare. Through the winter, there are often low cloud fronts that can obscure your view of the countryside.

The park gets 66 cm of rainfall on average and can reach temperatures well into the hundreds of Fahrenheit. Conversely, temperatures can drop as low as the low twenties.

Being largely wooded areas, the climate is quite temperate in the Sequoia Groves when compared to the wider national park averages. You can generally expect warm days and cool evenings, with temperatures during winter dropping as much as 15 degrees Fahrenheit below the summer temperatures in the 90s. Temperatures rarely drop below zero, but it is not unheard of.

Throughout the year, an average of up to 114 cm of precipitation falls on the groves, with a lot of this coming in the form of snow during the winter.

If you’re looking for Sequoia National Park accommodation, you won’t be disappointed. There are several places to stay around the park, including camp grounds. Each option offers unrivaled proximity to some of the most breathtaking scenery in mainland United States.

The Wuksachi Lodge is the flagship accommodation option, located a stone’s throw away from the General Sherman Tree, and only a little farther from Moro Rock, which offers stunning views of the surrounding area, and unforgettable sunsets.

Alternatively, though technically located within King Canyons National Park, the John Muir Lodge, Cedar Grove Lodge, and Grant Grove Cabins offer plenty in the way of views and amenities, all within reach of Sequoia.

If you prefer something a little more in touch with nature, there are fourteen camp grounds to choose from around the park, offering a unique experience that can only be had with Sequoia National Park camping. Three of these camp grounds are open all year round. Each campsite boasts a campfire, picnic table, fire with grill, and a metal food storage box. Each is suitable for up to six people.

It’s important to check ahead before setting off for your camping trip, as opening dates can be affected by things like the weather, and tree hazards.
The camp grounds available are;

As with most points of interest, the locations of these camp grounds should be clear on any Sequoia National Park map.

As beautiful as nature is, it is rarely forgiving. Always remember that the vast majority—around 97%—of the park is designated and maintained as wilderness, and that means there many hazards and risks to your safety.

The National Park Service works to reduce these risks, but your safety will ultimately be in your own hands. The risks you face out in the wild range from temperature extremes, wild animals and biting insects, falling rocks and trees, and sudden weather changes. Be sure to do your research and always come prepared.

There is a healthy population of black bears in the park and you must be careful to store and dispose of food properly. Find out more about how to do this.

There is plenty to see while at Sequoia, including the following locations of note;

This is a paved trail that clocks in at a little under a mile in length. It starts at the car park, and descends to the General Sherman Tree, where it proceeds to meander a little through a giant sequoia grove.

The Tunnel Log is a giant sequoia tree that, due to natural causes, fell, blocking a park road way back in 1937. Due to the enormous size of the tree, crews cut a large tunnel through it, rather than moving it, allowing vehicles and carts to pass under it.

Located in the centre of the park, Moro Rock is perhaps one of the most famous landmarks, a granite dome that is fitted with a 351-step stairway, affording easy access to the stunning views at the top. Don’t worry, the stairway is not the same wooden affair that was installed in the 1930s, but a more modern concrete replacement.

Starting near Lodgepole Camp Ground, a little past the Marble Fork Bridge, a trail starts that leads along a casual route of a little under two miles, culminating in the 365 metres high Tokopah Falls. A particularly impressive sight in the early summer.

Meadows are always pleasant to visit, but few are quite as stunning as Crescent Meadow. Rimmed by enormous sequoia trees, this meadow can be reached at the end of three miles of paved road, making for easy access. It is a popular place for a picnic.

Built in 1928, the Giant Forest Museum offers all manner of interesting information about the giant sequoias that gave the park their name, and the history of humans in the region.

You can visit this cave and enjoy the 1/2 mile circuit through the stalagmites and satellites underground waterways have created in marble. You can only visit during the summer and you need to book at least a month ahead to be sure of getting a ticket. 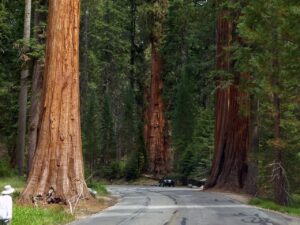