The South Downs National Park is the newest of the UK’s 15 national parks having only received full protected status in 2011. Its most obvious feature is the South Downs range of chalk hills running from Winchester in the west, across the counties of Hampshire, West Sussex and East Sussex, terminating where it meets the English Channel in the form of the spectacular white cliffs including Beachy Head and the Seven Sisters near Eastbourne but the South Downs National Park also includes the western Weald area which offers a complete contrast from the grassy Downs.

The scenic qualities of this area have long been recognised and the idea of granting it protection as a national park were put forward as early as the 1920s, the principal reasons being that it was an extensive area of beautiful and relatively wild country but these early plans never came to fruition and urban development and changing agricultural practices continued to impinge on the area’s character with much of the traditional grass “downland” being turned over to arable farming. The loss of such defining features may have been one of the reasons that further attempts to establish a delineated protected area were also unsuccessful and it was not until 1962 that part of the South Downs was officially recognised as the East Hampshire Area of Outstanding Natural Beauty followed in 1966 by the Sussex Downs Area of Outstanding Natural Beauty. Both of these AONBs now form part of the South Downs National Park along with a much wider area.

This area has of course long been regarded as the gateway to England and has been inhabited since ancient times. This was where Julius Caesar’s forces first gained a foothold on English soil and close to the site of the Norman invasion. Many signs of old fortifications still exist such as the Iron Age hill forts of Cissbury Ring. The area is perhaps best known for its chalk downlands but this has mainly come about due to human intervention. The area was originally densely forested but was cleared and used for the grazing of sheep which effectively gave rise to the characteristic grass types found today. For many years, the gentle grassy slopes were the predominant feature of the Downs but, over the years, much of the land has been turned over to arable farming the result being that the traditional downland now only covers around 3% of the land within the national park boundary.

Although named after the South Downs, the National Park boundary has been carefully drawn to include a rather wider area both in terms of physical dimensions and natural diversity. The easternmost parts include the famous white cliffs and the park’s southern boundary tends to follow the coastline but deliberately excludes major populated areas such as Brighton and Hove which have already rather encroached into this scenic area. Once the boundary passes Worthing, it continues westwards and north-westwards a few miles from the coast gradually turning northwards towards Winchester carefully skirting around most populated areas. The park’s northern boundary is rather more convoluted, the eastern section roughly following the line of the South Downs but, towards the west, it follows a route some considerable distance from the chalk hills.

Most people visiting the South Downs National Park do so in order to enjoy the wide open spaces. This is one of the least densely populated areas in southern England but also one of the most accessible. Walking, cycling and riding are the favourite activities and the park’s best known route is the 160 kilometre (99 mile) long South Downs Way which runs the whole length of the park and is the only designated national trail to run entirely within a national park. The South Downs National Park may be new but this path is believed to have been in use for 8,000 years. Unlike many long-distance walks, the South Downs Way can be tackled in easy stages and accessed at any point along its length. The path may seem to run across the top of the world but civilisation is never too far away and although many walkers follow the entire length of the trail, others are content to enjoy shorter sections.

The South Downs Way is by no means the only trail and the South Downs National Park boasts an amazing 3,300 kilometres (2,050 miles) of footpaths, bridleways and byways which is more than any other UK national park. Many walks provide links with the past with features such as Saxon burial mounds along with a chance to enjoy the flora and fauna. Some follow the courses of old railway lines, such as the Centurion Way and the Meon Valley Trail. Some walks have been arranged to reinforce the area’s rich literary heritage as the area has previously been the home of many literary giants including Jane Austen, Shelley, William Penn, John Galsworthy, Hillaire Belloc, Edward Thomas and Virginia Woolf. Others with a more gastronomic interest may choose to follow one of the food routes which connect various cafés, country pubs and other eating establishments. Routes following the line of the South Downs include some spectacular scenery from the cliffs of Beachy Head and the Seven Sisters to Devil’s Dyke but other walks reveal other fascinating aspects of this area such as the Serpent’s Way which is a 103 kilometre (64 mile) trail through the gorse and heather of Wealden Greensand.

For those wishing to get back to nature, nothing beats camping and the South Downs National Park has many great camp sites. These tend to be operated by farmers and other local land owners and can provide a truly peaceful getaway. The recent trends are towards “glamping” using yurts, bell-tents and timber buildings but there are many places to pitch a tent or perhaps spend the night in a bunkhouse. Those looking for a site with extensive entertainment facilities such as a play area or clubhouse may be disappointed as sites within the national park tend to focus much more on the idea peace and quiet or, as one visitor described it, “turning down the volume on life!” Most of the land within the national park boundary is privately owned and the area is generally unsuitable for unregulated “wild camping”. The South Downs National Park is simply not wild enough for such activities.

In summary, the South Downs have always been regarded as a place to escape to the country and have even been described as the “lungs of the south-east”. The official naming of this important area as a national park is, in most people’s opinion, long overdue. The legislation is now in place to ensure that it retains its unique character for evermore. In comparison to most other UK national parks, the South Downs National Park is far from being considered wild and remote. There are no immense mountains or glacial valleys but the gentle nature of the rolling downlands and ancient woodlands instil a feeling that this is the way that old England has always been. It is beautiful, exciting and spectacular but in a quintessentially English way. 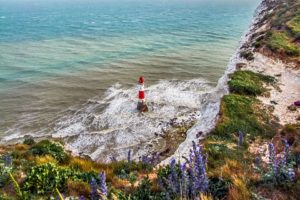