It is easy to see why Mount Fuji is one of the most popular destinations for locals and tourists alike. This stunningly iconic mountain with its snow-capped peaks is a cultural and spiritual symbol of Japan. The country’s tallest mountain, it attracts climbers, hikers, and those who just want to relax and admire its beauty. The image of its conical form is well known worldwide and became a UNESCO world heritage site in 2013.

For many centuries Mount Fuji has been a sacred site with many Shinto shrines located around the base of the mountain as well as on its ascent. Climbing this majestic peak has always been a religious practice, joined now by visitors from across the world who want to sample the breathtaking views from the top. They particularly want to experience the sunrise on this symbol of Japan, in the ‘land of the rising sun’. Sunrise on Mount Fuji is known by the term Goraiko, the arrival of light.

Where is Mount Fuji

If you have never visited Mount Fuji you may be surprised how close to the Japanese capital Tokyo the mountain lies. So where is Mount Fuji located exactly? Well it sits just 62 miles (100 km) south-west of Tokyo on Honshu island, the largest and most populous of the Japanese islands. The mountain sits on the border between Yamanashi and Shizuoka prefectures near the Pacific coast in central Honshu. It forms the principal feature within the Fuji-Hakone-Izu national park.

While being the tallest mountain in Japan, Mount Fuji is also one of the most famed and prominent peaks in the world. The precise Mount Fuji height is an impressive 3,776m (12,338 feet). Mount Fuji remains classed as an active volcano and sits on the junction of three tectonic plates. The crater at the summit of the mountain is just as impressive with a surface diameter of about 500 meters (1,600 feet) and consists of eight peaks. Mount Fuji’s highest point is formed by the Kengamine Peak. At the opposite end of the mountain, the circumference of Mount Fuji’s base is an eye-opening 78 miles (125km).

Known as Mount Fuji across the world, closer to home you are just as likely to hear the Japanese refer to this iconic mountain as Fuji-san or Fujiyama. In Japanese culture, Mount Fuji is viewed as a place of good luck and across the nation pictures and images of the mountain are displayed as a calming influence. Since the 7th century, it has also been a sacred place in the Shinto faith and the main deity of Mount Fuji is Princess Konohanasakuya, with many shrines dedicated to her on the base and on the summit of the mountain.

One of the many interesting Mount Fuji facts is part of the mountain land is actually privately owned. Mount Fuji is a part of the Sengen Grand Shrine located in Fujinomiya and the land around the peak is owned by the Fujisan Hongu Sengentaisha Shrine. This dates all the way back to 1609, although the land below 3,250 meters is considered public land. However, there is no keep off our land policy here. As you may expect, the Shinto priests are quick to say Mount Fuji belongs to the world and so, although you will be on private property, climbers can still reach the summit.

The seemingly perfect conical shape of the peak with its snow capped ridges is the iconic image of Mount Fuji. Indeed the snow can usually be seen on the peak for six months of the year. Surrounding the mountain are four towns, while on the northern slopes are the lakes which make up the Fuji Five Lakes. The lakes are now a key part of the area’s tourism, but were originally created following lava flows which resulted in damming effects. Lake Kawaguchi is the second largest of the five lakes and is known for its stunning panoramic views of Mount Fuji with the added bonus of the chance to glimpse inverted images of the mountain on the water.

People come from across the world to view and scale this famous mountain. Although locals and monks will have been climbing Mount Fuji for centuries the first officially recorded ascent was noted in 1868 by a British diplomat, Sir Rutherford Alcock, who took eight hours to complete his climb. Now up to 200,000 people each year hit the four trails which take you to the summit, with a good majority of these visitors still being from Japan. However until 1912 this experience was a purely male one, with women not permitted to attempt the climb until this time. This is not to say that women did not manage to find ways to avoid the ban, with reports of women like Lady Fanny Parkes successfully reaching the summit as far back as 1867.

Of course Mount Fuji is also a lure for artists. Images of this imposing mountain dominating the landscape have inspired travellers for many years. Perhaps the most famous representations of Mount Fuji were made by Katsushika Hokusai. The 36 views of Mount Fuji he produced were stunning woodcuts, showing the mountain in a series of settings, sometimes as the dominant feature and sometimes in a smaller background role. Begun in 1830 they offer a wonderful slice of life in and around Mount Fuji during that time.

Climbing Mount Fuji is a popular activity with up to 200,000 visitors a year hitting the slopes, often attracted by the seemingly perfect symmetry the mountain offers. The climbing season for anyone who has this on their bucket list runs from the start of July though to mid-September. There are four trails to the summit and these have 10 stations on route. The routes are paved to station five and many visitors take transport to this station where the climb truly begins. Of these trails the Yoshida is one of the more popular ones as it is deemed best to view the sunrise, as well as being more accessible.

Most ascents will take between five to eight hours to complete for the average person, with the descent around a couple of hours quicker. The trails have a few mountain huts for climbers to sleep in overnight if desired before pushing on in the morning to ensure they are at the summit in time to enjoy the spectacular sunset. These huts will need to be pre-booked and there are a few more of them on the Yoshida trail.

While naturally requiring a good level of physical fitness the trails up Mount Fuji do not demand any technical climbing skills. This is what makes it such a popular destination. There are points where the surface gets rocky and the terrain becomes steep, but for some it may be the thinning of the air as they get nearer the summit which becomes even more challenging. Once at the summit the walk around the huge crater takes around an hour for those who think the first 3,776 meters worth of climbing was not enough exercise for the day!

Being just 62 miles away from Mount Fuji, Tokyo is a good place to either base yourself or to set out from to travel to the mountain. On clear days visitors to Tokyo are able to get views of the mountain, enticing them to come and have a closer look. The bus provides the more affordable journey to Mount Fuji, with buses taking you all the way to the Subaru station 5 on the Yoshida trail. You should look to reserve seats on buses as climbing season is busy at Mount Fuji. So book your place and sit back and enjoy the journey, which is around two and a half hours long.

The direct Fuji Excursion train provides a quicker journey, leaving Shinjuku station in Tokyo and knocking off around 40 minutes compared to the time taken by bus. There are shuttle services which you can use, taking more than one bus or the train and bus, depending on the route you wish to take and the sights you want to see as you go. All in all there are plenty of options to reach Mount Fuji from Tokyo, just research the best option to match your requirements from the journey.

When Did Mount Fuji Last Erupt and Is It Still Active?

Mount Fuji last erupted in December 1707 and has been dormant during the intervening three hundred years. Volcanic ash and volcanic rock was released into the atmosphere, but there was not any lava flow. Ash from the eruption blanketed what is now central Tokyo over 60 miles away. The eruption is known as the Hoei eruption and it continued on into the new year of 1708. Looking at the images of Mount Fuji today it can be hard to equate such a tranquil setting with the power of a volcano. Yet despite laying dormant for over three centuries it is still classed by geologists as active. 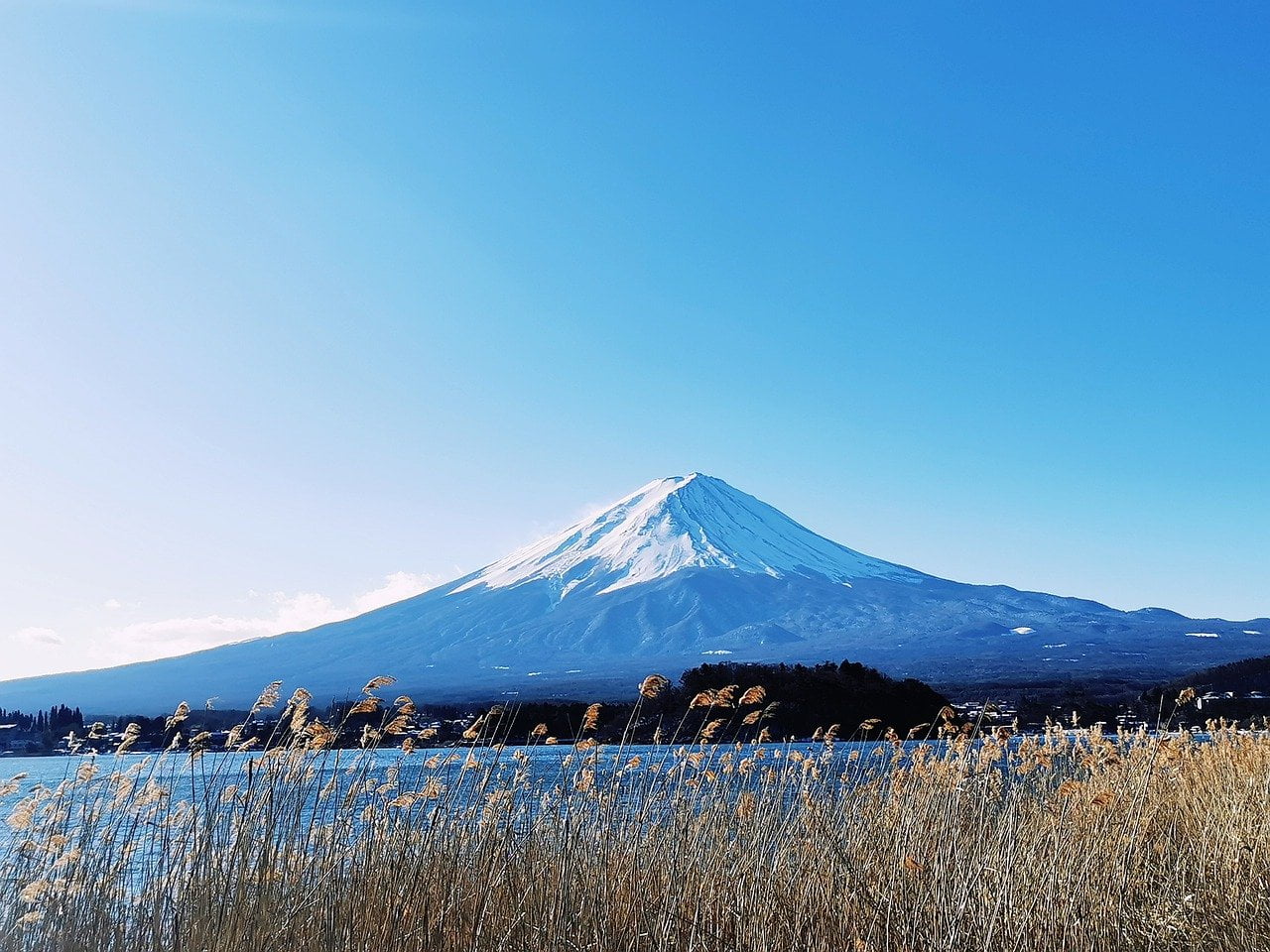 Although dormant the mountain still has periods of volcanic activity, the last of which was in the 1960s. These tend to materialise as tremors in the area, but the volcano is still monitored on a daily basis. The interesting fact about Mount Fuji is that it is actually made up of three successive volcanoes, one on top of each other. The bottom area is the Komitake volcano, on top of which sits the Kofuji volcano, which in turn is surmounted by the newest addition, Fuji. Mount Fuji forms part of a volcanic chain extending from the Mariana and Izu islands through to northern Honshu. 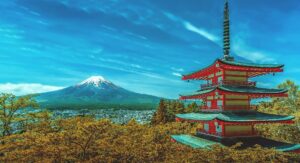