The Republic of Seychelles is a group of 115 Islands in the Indian Ocean 1,500 kilometres (900 miles) off the African Coast. The Islands were historically unpopulated but they were claimed by the French in 1756 and then the British in 1794. They gained independence 1976. They are members of the Commonwealth and the African Union.

The population is mixed being from many different cultures. Economically the main industry is tourism but exports of canned fish, cinnamon and vanilla are also important. 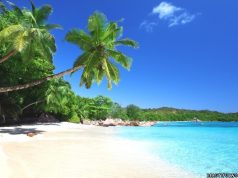 Seychelles Beautiful World - November 3, 2018
2
This is a place where the warm turquoise and aquamarine waters of the Indian Ocean present a vivid contrast as they gently lap up...
Read more
Load more