Christmas Island is a small island territory of Australia, covering 135 square miles (350 sq. km) in the Indian Ocean. Despite its relatively small size, the island has aroused great interest among both scientists and naturalists, with two-thirds of its land mass declared a national park. First discovered in 1643, Christmas Island has a history of minimal human disturbance which paired with its geographic isolation has led to a high level of endemism among its flora and fauna. In fact, with so many endemic species, the island is often referred to as the ‘Galapagos of the Indian Ocean’. Due to its tropical climate, the vast majority of the island is rainforest, though there are a number of rocky beaches scattered along the coastline.

Christmas Island was first sighted in 1615, but wasn’t named until Christmas day, 1643 by Captain William Mynors. The first ship to dock on the island was the Cygnet in 1688, a British ship captained by William Dampier. However, centuries passed before British naturalist Dr John Murray properly explored the island in 1872. By thoroughly surveying the area, Murray discovered significant phosphate deposits. Together with George Clunies-Ross, he began exporting this valuable phosphate in 1895, co-founding the Christmas Island Phosphate Company.

Another historical point of note is that during World War II (from 1942-45), the Japanese occupied the island. Many local islanders either fled or were evacuated prior to the Japanese invasion on 31 March 1942, though those who remained were captured and kept as Prisoners of War.

Up until 1957, Christmas Island was administered in Singapore, a British colony at the time. This changed when Australia purchased the island for £2.9m on 1 January 1958. As a result of this transaction, Territory Day is now celebrated annually on 1st October, and is met with great enthusiasm by all islanders.

On an annual basis, an estimated 120 million red crabs migrate en masse from the jungle to the sea to breed and spawn. This is a spectacular occurrence that happens nowhere else on Earth, and is often described as one of the wonders of the natural world. The migration lasts for several weeks, closing most roads on the Island. The crabs are protected by law and treasured by residents.

The migration begins with the onset of the wet season rains. We can never be entirely sure when the wet season will begin, though it typically runs from October to December. Whilst the rain provides the wet conditions necessary, the breeding sequence is also closely linked to the moon phases, as female crabs release their eggs into the sea during the high tide of the last lunar quarter.

Males lead the initial charge to the shore where they dig burrows, before being joined by the female crabs to allow mating to occur. Prior to returning inland, the males take one last dip in the ocean. The females begin to produce eggs within 3 days of breeding, and remain in the moist burrows dug by the males for another 12-13 days to allow the eggs to develop.

Upon contact with the water, the eggs released by the females immediately hatch. Clouds of larvae are washed out to the sea by waves, and develop after a number of months into prawn-like animals called megalopae. The final stage in the process involves groups of these megalopae gathering in pools close to the shore for 1/2 days before transforming into young crabs.

How to get to Christmas Island

Where to stay on Christmas Island

A number of accommodation options are available on Christmas Island, ranging from boutique hotels to more basic lodge style properties. As you would expect, many rooms offer stunning ocean views, whilst practically all provide the personal touch you would expect from small providers. 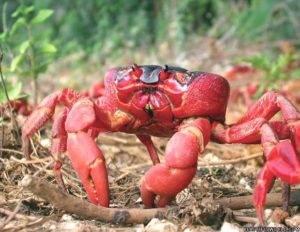