The Gorge Desfiladero de los Gaitanes is about 40 minutes drive North of Malaga city in Southern Spain. The River Guadalhorce cuts through the rock and forms a long and spectacularly deep (700m) Gorge which ends at El Chorro. The gorge is around 3km in length and at points, it is only 10 meters wide. In 1901-1905 a narrow pathway was hammered into the right-hand side of the gorge to provide access to a hydroelectric plant. Because King Alfonso XIII traversed the pathway on his way to officially open Guadalhorce’s reservoir, people started to call the path El Caminito del Rey ‘The Kings Little Pathway’. The name stuck.

The Most Dangerous Path in the World

Over time the path was not maintained, handrails fell away and holes started to appear in the path. The route gained notoriety as being one of the most dangerous paths in the world. Thrill seekers and rock climbers travelled to the gorge to attempt to traverse the increasingly decrepit path. Unsurprisingly accidents were common and people also died. Camino del Rey deaths peaked in 1999 and 2000 (there were 5) which led the government to officially close the route to everybody. In 2014 the regional government started work on a modern pathway. In most places, it sits just a meter above the remains of the original path. In 2016 the pathway opened to the public and it is now a safe and carefully controlled route through this spectacular gorge.


Getting to The Kings Walkway

The route is one way and it is not circular. It begins just outside the village of Ardales and ends at El Chorro which has a train station. There is a shuttle bus which runs between the two ends of the walk every 30 minutes for €1.55. Access to the area is quite easy. It is a simple 1 hour drive from Malaga Airport to Ardales or alternatively, you can catch a train from Malaga’s main train station (María Zambrano) which takes 40 minutes to reach El Chorro.

The Start Point of the Caminito del Rey

It takes 35 minutes by car or 2h 30 minutes walking to get from the village of Ardales to the actual start point. Take the MA-5403 which runs North East along the Guadalhorce reservoir for 10km until you reach the large El Kiosko restaurant which is on the right. There is quite a lot of parking at the side of the road and a couple of official car parks as well. On foot, head back the way you have come and after about 200m there is a small tunnel cut through the rock. The shuttle bus drops you off here. Head through the tunnel and join the forest path on the other side. Head down and to the right until you reach the buildings and toilets at the start point. You will need to show your ticket and passport or identity card and you will be issued with a hard hat. You wait until your allotted time period and then you can progress along the walk at your own pace.

Access to the walk is carefully controlled for safety reasons, as a result, you have to book your place on the walk on a specific day and at a specific time. You will need to make sure you arrive at the ticket booth in good time. It does take some time to get from Ardales by car to the car parks (25 minutes) and then it takes a further 10-20 minutes to walk from the car parks to the control cabin. Make sure you build in plenty of time to do all this. In addition, you need to have your ticket checked, show ID and collect your safety hat. 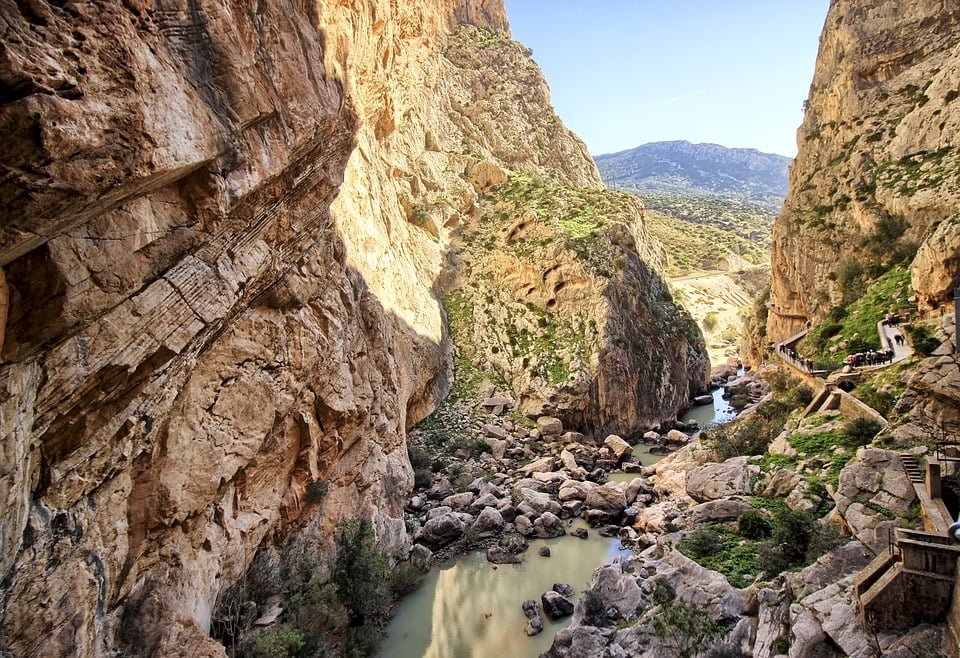 From the control booth, the walk is 7.7 km long. 3km of the walk is via raised paths secured to the side of the cliff face. In the middle of these two sections, there is a wide open valley walk through forest and hills. This makes a great place to rest or have a picnic. The walk takes between 2h and 4h depending on your speed and how many photos you take.

The walk is now popular so it is a good idea to book well in advance so you can be sure there is availability before you plan your travelling or book a hotel. Slots are usually released four months in advance. It is highly unlikley you will be able to get any last minute tickets. You should only get your tickets from the official website. Tickets are not transferrable so don’t buy anyone else’s as the tickets are linked to an identity card or passport number.

Select the ‘Book Your Visit’ (Reserva tu visita) button which takes you to a calendar. Select a day and then you will see the available time slots to the right which rune from 9.30am until 5pm Tuesday to Sunday. If the time slots are full they will show in red. If they show as green there are available spaces and you can see the number of slots free. Click the ‘Choose’ button you are then given the choice of a ticket €10 or a ticket with a return shuttle bus €11.55. Select the number of tickets you want and then enter your details. You need to have a functioning email address and make sure your passport or identity card number is accurate as this is used to verify your identity at the control booth. You will need to add passport or identity card information for each member of your party.

For other things to do ideas in the Malaga province visit Absolute Axarquia, a site that has built information on the area for over 20 years.  For local accommodation when visiting the Camino del Rey you can find a wide selection of ‘Casas Rurales‘ for short term let. 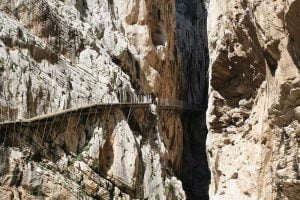