Most people have a romantic notion about being shipwrecked on an island paradise but, when the vessel The Stirling Castle was holed trying to cross the southern part of the Great Barrier Reef in 1836, the experience proved to be far from idyllic. Captain Fraser was in command of the ship and responsible for his passengers and crew and his pregnant wife Eliza had accompanied him on this voyage. The ship’s two lifeboats were launched one of which made steady progress towards Great Sand Island which it safely reached and the occupants were rescued by people from the local settlement. The occupants of the other boat however, including Captain Fraser and his wife, were less fortunate. The boat was leaking and, during this arduous trip, Eliza Frazer gave birth to a child on the boat but the infant died soon after. Eventually they made landfall only to be captured by indigenous islanders. Almost all perished possibly as a result of hostilities or illness, including Captain Fraser. The authorities launched a rescue attempt employing the services of an ex-convict who had spent some time living among the aboriginal people and could speak their language. Eliza and possibly three other people were found and rescued six weeks later and she went on to become a minor celebrity frequently giving ever more exaggerated accounts of the horrors of her ordeal. The Island was renamed Fraser Island in memory of this event.

Fortunately today’s visitors are able to fully appreciate this remarkable island which gained UNESCO heritage listing in 1992. Fraser Island is located just off the coast of south-east Queensland, Australia approximately 200 kilometres north of Brisbane. The Island is around 120 kilometres long and 24 kilometres wide and its main claim to fame is that it is the world’s largest sand island having an area of 1840 square kilometres. The description “sand island” may conjure up pictures of a rather featureless landscape but nothing could be further from the truth. Much of the island is heavily forested and this is believed to be the only place on Earth where rainforests grow on sand. Another remarkable feature of Fraser Island is that it has over 100 freshwater lakes. 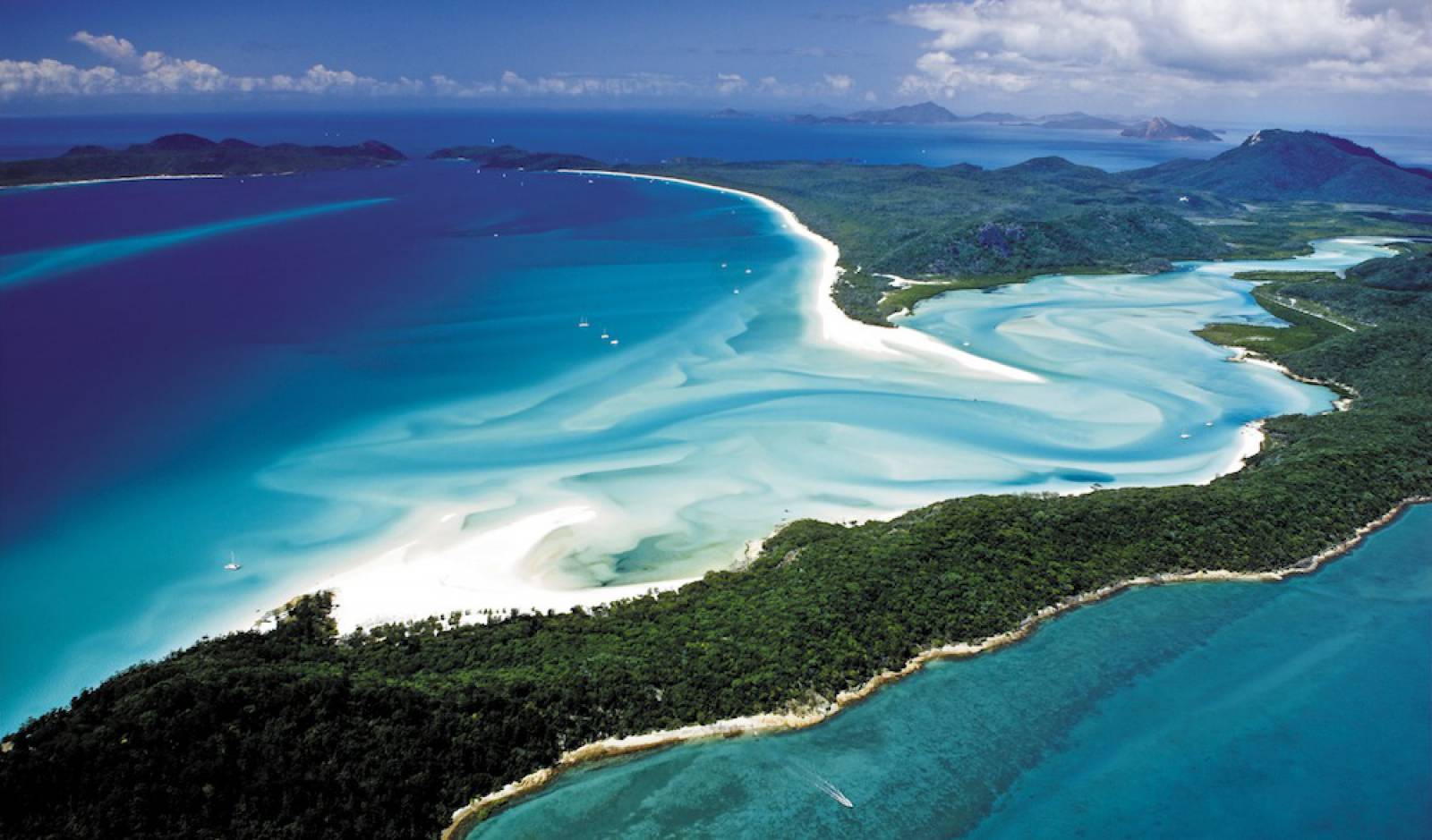 History and Legend of Fraser Island

The island has been inhabited by indigenous peoples for thousands of years, estimates ranging from 5,500 to as long as 20,000 years ago. The Butchulla people called the island “K’gari” meaning Paradise. The legend tells that the great god Beiral sent his messenger Yendingie down to earth to create a place where humans could live. Yendingie was accompanied by the goddess K’gari. When all of the work was done, K’gari loved this place so much that she refused to leave it and Yendingie responded by turning her into this island so she could remain here forever more. The island probably first came to the attention of the outside world when Captain Cook sailed past it in 1770 and noted some of the local population standing on a rocky part of the island which he proceeded to name “Indian Head”. The first recorded European landing was not until 1802 when Captain Matthew Flinders visited the north of the island and made friendly contact with the resident islanders. Throughout the island’s long history, it had a resident population of a few hundred people probably rising to around two thousand at certain times of the year but the arrival of the new settlers had a devastating effect on island life possibly due to diseases and different lifestyles interfering with traditional practices and the population numbers plummeted. The island was rich in timber reserves and, at a latitude of 25 degrees 13 minutes South, most of its forests are described as subtropical rainforests with species including Fraser Island satinay, brush box, hoop pines and kauri pines. There are also areas of mangrove forest and eucalyptus woodlands. Logging began in 1863 by the American Jack Piggott, known as “Yankee Jack” and the timber industry continued right up to 1991. Since that time, tourism has been the island’s major industry with particular emphasis on environmentally friendly “eco-tourism”.

Places to Visit on Fraser Island

As this is a sand island, it comes as no surprise that sand is one of its main tourist attractions. The incredible 120 kilometre (75 mile) beach serves both as a major highway and even as a landing strip for light aircraft. Local regulations stipulate that cars must always give precedence to aircraft. Many of the sand cliff-faces show colourful striations and the island has 72 different colours of sand mainly in various shades of red and yellow. The sands have accumulated here for at least 750,000 years and they mainly originate from parts of south-east Australia. The island’s lakes are another major attraction with Lake McKenzie offering clear blue waters and white sandy shores. Lakes are normally rare on sandy soil but on Fraser Island, the sands are constantly moving resulting in ridges and depressions. Hollows then gain an impervious bottom covering due to accumulating vegetable matter which then solidifies resulting in “perched” lakes far above the water table. With an area of 200 hectares, Fraser Island’s Lake Boomanjin is the largest perched lake in the world. The island does in fact contain half of the world’s perched lakes. The moving nature of the island’s sands also gives rise to “barrage” and “window” lakes. Most of the lakes are fairly acidic leading to little animal life and many simply rely on rainfall with no water inlet or outlet. Such lakes are very susceptible to contamination and great care needs to be taken when using products such as detergents or sunscreens in these localities. The island has been the site of many shipwrecks and one of the most visited is the rusting remains of the SS Maheno which sank in 1935 when being towed to a breaker’s yard. This wreck was used for target practice by the R.A.A.F during the Second World War. Due to its dangerous condition, climbing on this wreck is not allowed. 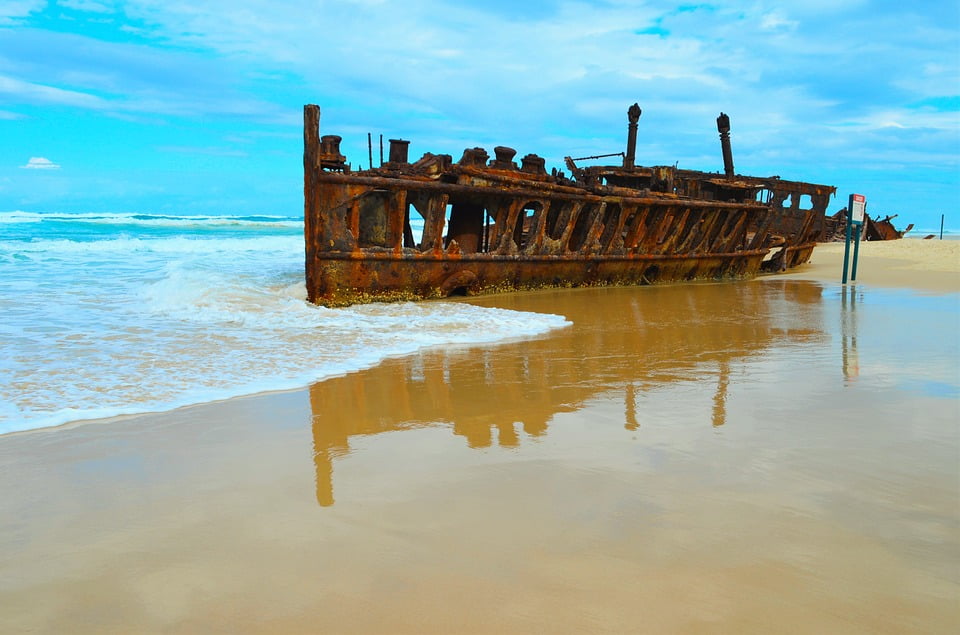 Islands are great places for observing animals and Fraser Island is no exception. The island’s dingoes are regarded as being amongst the purest bloodlines and, in order to prevent any possibility of out-crossing, domestic dogs are not allowed on the island. Feeding or attracting the dingoes is prohibited and, as dangerous wild animals, they must be treated with care and respect. A huge range of birds can be observed and over 350 different species have been recorded including the endangered ground parrot. There are many species of bat including the amazing flying fox and the conditions are ideal for many reptiles such as snakes and lizards. The large sand monitor and lace monitor can often be seen around picnic areas. The small-eared mountain possum and swamp wallaby can also be found on the island. Feral horses known as “brumbies” used to roam the island but the last of these were removed in 2003. The waters around Fraser Island abound with wildlife including turtles,dolphins and dugongs. Between July and November, migrating humpback whales come close to the island and the many fish species include the formidable great white, bull and tiger sharks. The occasional salt-water crocodile may also be seen.

Fraser Island is separated from the mainland by the waters of the Great Sandy Strait and regular car ferries run to the island. Those taking vehicles should remember that this terrain is strictly for 4x4s. Visitors should ensure that they do not forget to take along a shovel and a tow-rope. All vehicles require authorisation to visit the island. Organised trips using four wheel drive coaches are also available and it is even possible to visit by air, landing on the beach. With a pleasantly warm climate throughout the year, any visit should provide an unforgettable experience. Camping and hiking are among the most popular types of holiday with many scenic walking routes available. So from the rainforest and the freshwater lakes to the sandy coves and beaches there is always somewhere to explore and Fraser Island has remained completely undeveloped. Its protected status should ensure that it stays this way. Eliza Fraser would probably have not described this island as paradise but there are many who would disagree with her. 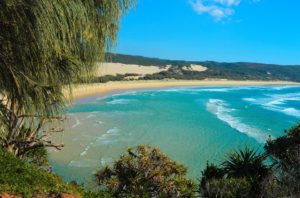