White sandy beaches and the intense blue waters of the Caribbean in the form of secluded coves and lagoons make this part of Colombia worthy of the description “Tropical Paradise” but the Tayrona National Park has much more on offer making it a magnet for those interested in the concept of “eco-tourism”.

El Parque Nacional Natural Tayrona was first established in 1964 in recognition of its importance as being a place of outstanding natural beauty but also having regard to its range of habitats for a huge diversity of wildlife.

It is located on Colombia’s northern Caribbean coastline at the point where the foothills of the mighty Sierra Nevada de Santa Marta mountain range plunge into the sea forming a series of coves and bays. The warm waters provide perfect conditions for coral growth resulting in many reefs and lagoons. By national park standards, it is not a particularly large area, covering just 150 square kilometres but there can be few other places with such a diverse range of different ecosystems and habitat types. Much of the area is densely forested but the nature of the tree covering is far from uniform with rainforest, dry forest and cloud forest being found along with mangrove forests at sea level.

The Climate of Tayrona National Park

Being located well within the tropics, it will come as no surprise that the climate tends to be predominately hot throughout the year but there is much local variation. The shoreline is the most visited part of the park but in other places altitudes of 900 metres above sea level can be reached offering significant changes in weather patterns. Visitors to the area may assume that, being in the tropics, that there are no seasonal weather changes but, although there are no great temperature variations, this area is subject to two rainy seasons, the first being from May to June and the second from September to November.

How to Reach Tayrona National Park

For many visitors, part of Tayrona’s charm is its inaccessibility and it must be said that visiting some parts of it requires considerable effort. In general, the park itself is fairly easy to reach and most visitors will come from the nearby city of Santa Marta. A road journey of around 32 km along the “troncal del Caribe” highway heading in the direction of Riohacha leads to one of the main park entrances at El Zaino. This entrance provides access to Canaveral, Arrecites, Cabo de San Juan de Guia and Pueblito. Other entrances, from the same road, include Calahazo which provides an alternative route to Pueblito and Palagana giving access to Neguanje, Gaycara and Playa del Muerto “playa cristal” but it should be noted that no visitor facilities of note exist at this entrance and it is considered as being suited to day visitors rather than those planning a more extended stay.

Canaveral is perhaps the most easily accessible part of the park and can be reached by bus or car. Parking facilities are available. There is a good range of facilities and accommodation in the traditionally styled ecocabanas, often referred to as ecohabs is a fun way to experience getting back to nature. At Arrecites, camping is an option and visitors may either bring their own tents or hire them from the site operator. Ecohabs are also available and another popular form of sleeping accommodation is to hire a hammock.

Access to many parts of the Tayrona National Park involves long hikes and so it is important for foot travellers not to carry too much with them. The only practical way to carry loads to the more inaccessible areas is to utilise the services of pack-horses which are available to rent at very reasonable rates. La Piscina is one of the favourite locations for swimming and more camping is possible at El Cabo which is a spectacular and much photographed rocky outcrop set between two beaches surmounted by a traditional wooden building where it is possible to rent a room or a hammock. As an alternative to taking the long trek, it is possible to reach El Cabo by boat with a regular service running between Tagatanga beach and El Cabo but, depending on conditions, the boat trip can be a rather hair-raising experience possibly best suited to the most dedicated thrill-seekers.

Water sports are popular, but great care must be taken to only swim in recommended areas as some parts, which are clearly marked, have dangerous currents and fatalities have occurred. Snorkelling and scuba diving can be enjoyed at Playa del Muerto, Isla Aguja and Granate.

Although some may regard hiking as an unfortunate necessity when visiting the park, others will find it a great way to really explore the region and experience the amazing scenery, plants and animals. Four designated trails are provided of varying lengths and degrees of difficulty. The Kogui (or knowledge) trail is regarded as being fairly easy and leads from Canaveral to Arrecites taking around an hour. Leading on from this, the leg from Arricites to Roca del Saco leads through Arricites beach, the natural pool and Cabo San Juan del Guia. This takes around two hours and is again regarded as easy.

A popular hike is to reach the ruined Tayrona city of Pueblito. Here can be seen evidence of ancient civilisation in the area with terraces and roads but sadly the buildings no longer exist other than a fairly recently constructed hut presumably built to show how the original buildings may have looked. The hike however is well worth the effort and takes around three hours from Cabo San Juan del Guia or four hours from Calbazo. Both hikes are classed as being difficult.

With such a wide range of habitats, many different animal and plant species flourish here. The forests are home to many species of monkey and other mammals including the fearsome jaguar, although these night hunters are seldom seen. There are around seventy different species of bat, many reptiles including snakes, lizards, iguanas, frogs and the aguja caiman. Columbia is said to be home to more species of bird than any other country on Earth making this an ornithologist’s paradise.

Tayrona National Park may be a tropical paradise but there are many down-to-earth considerations for any prospective visitors. The first, rather obvious, fact is that the park’s opening times are dictated largely by the length of the tropical day so it is best to arrive early. There are also many rules and regulations which must be observed. No plastic bags or polystyrene are allowed on site and it is also prohibited to bring alcohol through the park gates although it may be bought within the park.

Suitable clothing and footwear should be chosen with particular consideration for preventing insect bites and it is also recommended that a general anti-venom product be carried. An important consideration, especially for those on a tight budget, is that water is very scarce within the park and bottled water is normally brought to the more remote areas by boat and sold to visitors at a high price so, if at all possible, bringing along a supply of drinking water could make good financial sense.

This is very much a place to escape from the hustle and bustle of everyday life and this invariably means forgoing some things we take for granted. Phone coverage and internet is very poor or non-existent and the electric supply, where available, is turned off fairly early in the evening. Visitors should always remember that their visit should not cause any environmental damage to this protected area and be prepared to make some personal sacrifices and changes to this effect. In many ways Tayrona National Park epitomises the true spirit of eco-tourism. 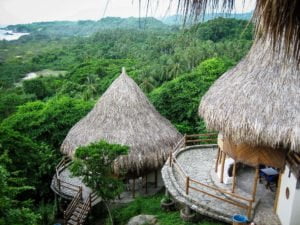