To describe this incredible area as a park may seem to be something of an understatement. Canaima National Park in south-east Venezuela is simply immense covering an area of 30,000 sq km. To put this fully in perspective, it is roughly the same size as Belgium but that is as far as any similarity goes. This part of Venezuela’s Bolivar State was first established as a National Park in 1962 but at that time was around a third of its current size. The boundaries were extended in 1975 and in 1994 this area was granted UNESCO World Heritage listing due to its unique topography – the presence of abrupt relief in the form of tabletop mountains known as Tepuis. These high mountain plateaus cover around 65% of the park area and at lower levels, there are areas of grassy savannahs and large areas of forest including groves of Moriche palms, montane (mountainous) forests and large parts of the moist forests of the Guayanan Highlands.

For those who may be unfamiliar with the term “moist forest”, this is a very wide descriptor which includes tropical rain forest and other woodlands with high levels of precipitation. For most people, the word “jungle” is perhaps more familiar. It could be reasonable to expect that any national park that had been in existence for over half a century would now be served by an excellent road network but amazingly this is not the case. Canaima National Park remains as remote and inaccessible as ever with no road links to the popular tourist areas and access only being possible by air. Indeed within the park itself, there is but a single road linking the south-eastern settlement of Ciudad Bolivar with other inhabited areas. It is really not like Belgium at all!

Canaima National Park is regarded as being one of the largest in the world but surprisingly is only the second largest in Venezuela. The first place goes to the Parima-Tepuis National Park. The name “Canaima” comes from the language of the local Pemon people and means “Spirit of Evil”. The park has the world’s highest waterfall, Angel Falls. It also arguably has the world’s second highest waterfall, Cuquenan (or Kukenan), but this is only true when the measurements refer to the height of the single free-falling “leap” of water rather than the total drop.

The park is home to five endangered animals these being the jaguar, ocelot, giant anteater, giant armadillo and giant river otter. 29 species of the park’s birds are endemic and found nowhere else. Even more plants are exclusive to this region and although precise numbers are not available, it is believed that around a third of the park’s plant species are endemic. The rocks forming the famous tepuis are some of the oldest known. These sandstone rocks are 1.5 to 2 billion years old. The igneous bases on which they stand are possibly up to 3 billion years old. The rocks found here are closely related to others in Africa and they were formed at a time when the two continents were joined as a single super-continent. This incredible landscape was the inspiration for Sir Arthur Conan Doyle’s book, “The Lost World”.

One of the most famous and frequently visited features of Canaima National Park is what is indisputably the world’s tallest waterfall. Angel falls has a total drop of around 979 m with some sources putting the figure at over 1,000 m but a single free-falling leap of 807m. By comparison, the largest single drop on The Niagra Falls is a mere 50 m making the Angel Falls around sixteen times higher.

Angel Falls descend from a large tepui called Auyantepui which, in the language of the Pemon people means “House of the Devil”. It would seem reasonable to expect that the waterfall’s name was somehow a continuation of this spiritual theme but this is most definitely not the case and this huge waterfall did not gain this name until the 20th century. Although its existence was obviously known to local people, the waterfall is considered to have first been discovered by an American aviator and adventurer called Jimmie Angel. He first flew over it in 1933 when looking for deposits of gold ore. Few people seem to have believed his tale of discovering a “mile-high waterfall” just as they had dismissed his earlier claims of finding a river of gold but he did manage to finance a further visit in 1937 and decided to land his Flamingo monoplane on top of Auyantepui. He landed the plane successfully but unfortunately, the wheels became bogged down by the wet mud and the plane nosedived causing some damage but no serious injuries. The plane’s occupants then had the arduous task of climbing down the tepui and reaching civilisation. This involved an eleven-day trek and they finally reached the settlement of Kamaratu. The whole escapade became a worldwide news story and Angel became immortalised by having the waterfall named after him. His aircraft remained embedded in the mud on top of the tepui until 1970 when it was disassembled and removed. It has since been rebuilt and is on display in an aviation museum in Maracay.

This magnificent waterfall remains almost as inaccessible as it was during the days of Jimmie Angel but most visitors feel that it really is worth all of the effort involved. The usual way of visiting the falls begins by taking a flight to the village of Canaima. Many flights include an aerial view of the Angel Falls so visitors have some idea as what to expect. Canaima is around 50 km from the falls and with no roads, the usual method of transport is by a motorised canoe known as a “curiara”. The boat trip usually takes around four hours and follows the Carrao and Churun rivers. The departure point is the Canaima Lagoon and this also has some spectacular waterfalls especially after periods of heavy rain and most visitors find this to be an unexpected bonus.

The boats follow the meandering river along a south-easterly course and the gigantic tepui can easily be seen during the trip. Reaching the waterfall viewing point requires a further journey on foot and this usually takes around an hour. The sheer size of the waterfall can then really be appreciated. The spray can often be felt at a distance of 1 km and after heavy rains the waterfall is at its finest. The driest time of year is between December and April so it is probably best to visit outside of these months in order to see the falls at their most magnificent.

Most waterfalls around this area continue to flow throughout the year but during dry periods the waters of the Angel Falls sometimes even fail to reach the ground being blown away as spray. It is possible to start off from a slightly closer point by taking a light aircraft to the Carrao airstrip but the advantages are only marginal. It seems that during his life Jimmie Angel never quite got as close to the falls as he would have hoped but at his request, after his death, his ashes were spread over the falls bearing his name.

Although Canaima National Park is huge, only relatively small parts of it are involved in tourism. The village of Canaima tends to be the most important location having the advantage of an airport that has regular scheduled flights from other parts of the country and river access for tours to the Angel Falls. Much of the accommodation is set around the lagoon in the form of lodges some of which can be extremely luxurious.

Local guides are at hand for visiting points of interest and for those wishing to climb a tepui, Mount Roraima is the tallest and the climb is ranked as being easy but the task should not be underestimated. Both the ascent and descent take two days and the climb usually involves spending at least one day on the top of the plateau. For those preferring an organised tour, there are several operators running tours from Caracas which include flights, accommodation and of course visits to the waterfalls. The weather here is generally hot and wet with daytime temperatures averaging around 24 or 25 degrees Celsius. At the higher altitudes at the tops of tepuis, the night-time temperatures can fall to around zero degrees.

The fee for entry to the park is currently around $4.00 US Dollars and this is collected at Canaima Airport. Another point to remember is that yellow fever inoculation is regarded as being compulsory so proof of this is needed.

Sir Arthur Conan Doyle certainly saw this incredible place as “The Lost World” worthy of being the home of prehistoric creatures. In truth, these rocks were in existence long before the dinosaurs and yet it remains largely unexplored and one of the world’s most untouched regions. Perhaps it is time that it was found by those adventurers looking to explore our beautiful world. 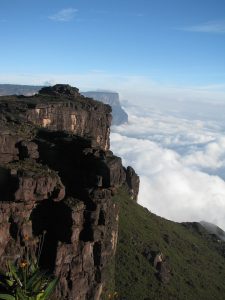