In the days of sail, long before the advent of global positioning systems, sailors used to rely on landmarks to check their positions and, for seafarers heading across the Atlantic towards Europe, or towards Spain from northern Europe, the high mountain peaks of the Picos de Europa (Peaks of Europe) were often the first sight of land to appear on the horizon. This is the generally accepted reason why these spectacular mountains in northern Spain are named not after a geographical region or country but a whole continent. Approximately 20 kilometres inland from Spain’s northern coastline, these towering peaks form part of the Cantabrian mountain range and are shared between the autonomous regions of Castilla y León, Cantabria and Asturias.

Formation of the Picos de Europa

The Picos de Europa mountains consist mainly of limestone which was formed during the carboniferous period and thrust upwards as the Earth’s surface moved and folded during the Hercinian folding. The effects of glaciation separated this area from the adjacent mountains and divided the rocks into the three great massifs. Karstification, the weathering effect of slightly acidic rain on alkaline rocks such as limestone, has resulted in the amazing formations seen today. The mountains are incredibly steep-sided with many rifts and fissures. Being generally very porous, little water remains on the surface with most passing through, often re-emerging at lower levels. Deep caves and potholes are commonplace and some of the world’s deepest caves can be found in this region.

The significance of this unique landscape has long been recognised and in 1918 the western part was declared a national park, on a date coinciding with the centenary of the 12th century Battle of Cavadonga. At this time the park included the lakes of Cavadonga and the western massif covering an area of 169.25 square kilometres. It was called the Parque Nácional de la Montana de Covadonga. In 1995 the park was extended to include all three massifs and an area of 646.60 square kilometres and renamed the Parque Nácionale de Picos de Europa. When looking at the extent of the park on a map, the first thing to be noted is that, with a total length of just 40 kilometres, this is not a huge mountain range but the word small can hardly be applied to Picos de Europa as everything here seems to be on a gigantic scale.

Mountains of the Picos de Europa

The mountains are of course the major geological feature and these are split into three distinct limestone massifs the easternmost being the Ándara, the central the Urrieles with the Picos de Cornión to the west. Within each massif, there are many individual peaks, the highest being the Torre de Cerredo at 2,650 metres but there are thirteen others with heights exceeding 2,600 metres.

Many visitors may regard the park as being solely under the control of the Spanish government but it actually falls between three autonomous regions each of which share in its stewardship. The point where the boundaries of all three authorities meet is at the peak of Pico Tesorero at a height of 2,600 metres. The most famous of all Pico de Europa mountains is the impressive limestone tower usually known as Naranjo de Bulnes. This represents one of Spain’s most challenging climbs and is especially noted for its 550 metre vertical west face. The origin of the name Narango de Bulnes is unclear but Bulnes is the village below the mountain and Narango is Spanish for “Orange Tree” so the name presumably refers to the mountain’s orange colouration. This peak is also commonly referred to as “Urriello”, or in Asturian as “Picu Urriellu” or simply “El Picu”. High levels of mountaineering expertise are necessary for this and many other difficult ascents but climbs can be found for all skill levels with some simply needing good all-round levels of fitness. For extended expeditions involving overnight stops on the mountains, mountain refuges are available many of which have wardens during the summer months but it is usually necessary to pre-book places to guarantee a bunk and a meal. Even more basic accommodation can be found in the form of shepherds’ huts but these normally provide nothing more than walls and a roof.

Most visitors prefer to walk rather than climb and there are many beautiful clearly marked walks all of which offer breath-taking views. Details of all walking routes can be obtained from one of the park’s visitor or information centres. Those choosing to walk may assume that a good head for heights will not be necessary but it must be remembered that these are some of the steepest slopes to be found anywhere and even apparently simple walks often involve sections with steep precipices. Nowhere is this more evident than in the case of the Picos de Europa National Park’s most popular hike, the Cares Gorge path.

In the early part of the 20th century, work was carried out to utilise some of the water from the River Cares to power a hydro-electric station at Poncebos, at one end of the Cares Gorge. This work involved the construction of a canal and service path running along the north wall of the gorge. It is worth noting that the Cares Gorge is an immense ravine carved out of the limestone by the river with a depth of 1.5 kilometres and near-vertical sides. The path clings to the side of the gorge and runs for a distance of 12 kilometres. In most places the path is around 1.5 metres wide but in places it narrows to not much more than 1 metre with the result that passing oncoming walkers can often be quite precarious. Walking the full length of the path usually takes around 3 hours so a full round trip involves a full day’s walking. This hike may endow visitors with some of the attributes of mountain goats and it is not uncommon to come across goats sharing this same path.

The Picos de Europa range is normally regarded as a dividing line between the moist green coastal area to the north and the hotter, dryer interior region to the south. The weather can be influenced by both maritime and continental factors. As a mountain range relatively close to the sea, high levels of precipitation are normally expected. Most of the rain (or snow) falls during the winter and spring months with summer and autumn being drier but rain can fall at any time and often does so with little or no notice. Mists and fog coming in from the sea are also quite common and climbers or those exploring locations off the beaten track need to be particularly careful as it is easy to become disorientated. Even on a hot clear summer’s day, suitable waterproof clothing such as a cagoule should always be carried. Other essentials include maps, a compass, sun hat, sun screen and suitable hiking boots. Although the weather may be rather unpredictable and often wet, the good news is that the temperatures are usually around 4 degrees Celsius higher than those in southern England.

These rocky mountains may appear to be an inhospitable place but a wide range of wildlife can be found. On the lower slopes and in forested areas, roe deer and wild boars roam freely. On the high steep slopes mountain goats and the iconic Cantabrian Chamois can be observed. More elusive are the Cantabrian brown bears which inhabit some of the high remote areas. Iberian wolves also visit the region but resident numbers are small. Various species of eagles, buzzards and vultures can be seen circling overhead and many species of butterfly find these mountains an ideal habitat.

Visitors to the Picos de Europa National Park are never short of places to visit to enjoy some of the finest mountain scenery in the world. Although a popular visitor destination for many years, it has remained a truly natural beauty spot. Winter visits can offer cross country and off-piste skiing but here you will find no intrusive ski resorts. Avalanches are a constant threat however and for any winter sports activities an experienced guide is essential. With such a breathtakingly beautiful place, many visitors are surprised at the lack of crowds and the general consensus is that most visitors from northern Europe usually associate Spanish holidays with hot sun and beaches. Those who have been lucky enough to have discovered this wonderful place seem determined to keep the secret to themselves. Picos de Europa is a genuinely landmark destination. 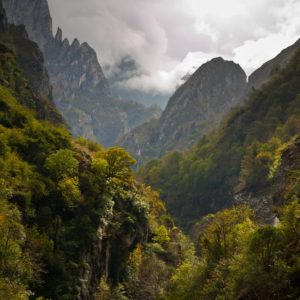