Much of the history of Scotland has been handed down as tales passed from one generation to the next. This is a country with a violent and blood-stained past but, in addition to the indisputable historical facts, many of the stories about Scotland in bygone days also include generous helpings of legend, myth and magic. Nowhere is this more apparent than on the Isle of Skye, the largest island of the Inner Hebrides. Known in Gaelic as An t-Eilean Sgitheanach (or the island of mists), this is a place where the line between fact and fiction becomes rather blurred.

It is almost certain that a local girl, Flora MacDonald helped Bonnie Prince Charlie to elude the forces of George II by rowing him “over the sea to Skye” but it is also generally accepted that in earlier times, one of the Chiefs of the MacLeod clan married a fairy princess on the island. This is probably the reason that certain places on Skye are named after the little people including the Fairy Bridge, Fairy Glen, Fairy Knoll and the Fairy Pools.

Skye’s Fairy Pools on the River Brittle have existed since ancient times and yet have only recently come to the attention of world travellers in search of beautiful places. The power of the media and the internet have elevated this previously little-known beauty spot into a must-see destination.

Visiting the Fairy Pools involves a fair hike across the moors following the course of a stream to the point where a series of waterfalls and pools can be found in a ravine cut by the waters. The starting point is usually from the road to Glen Brittle and a car park is available but, due to the popularity of this walk, it is woefully inadequate and parking can present problems at busy times.

The walk to the pools is described as “easy” but it does take around 45 minutes each way and the path, although partly gravel is in places little more than a simple mud track. There are a couple of river crossings involving the use of stepping stones and these can be a little tricky especially in wet weather. The pools themselves present an enchanted scene, the most noticeable feature being their vivid blue-green appearance. Some of the pools are deep and care needs to be taken especially with children.

Visiting the pools on a hot dry day can be a real pleasure but visitors should be aware that this is usually a wet place and should dress accordingly. One anecdotal account describes a visitor to this part of Scotland being so fed up with mist and drizzle every day that he asked a passing child, “Does the weather ever change here?” to which the boy replied, “How would I know? … I’m only six!”

In recent years, there has been an increase in the popularity of “wild” swimming and it seems that the Fairy Pools have been identified as a place where the adventurous can take to the waters. The dangers of such activities should not be underestimated and this site in no way recommends or endorses swimming in the Fairy Pools. On a hot summer’s day, the waters may look inviting but local people often remark that the waters only come in three different temperatures, cold, b*****d cold and frozen! Anyone contemplating taking a dip should bear this in mind and a wetsuit would make a lot of sense. However, for those brave enough, or foolhardy enough, to take the plunge, some of the pools are deep enough for underwater swimming and there is even an underwater arch that it is possible to swim through.

The Fairy Pools are a wonderful place to visit but the whole walk runs through some of the island’s most spectacular scenery with the jagged outline of the towering Black Cuillins, the source of the River Brittle and the imposing pinnacle of Sgurr an Fheadain with its distinctive Water-pipe Gully gash running down its facing elevation. Many people enquire about any local legends associated with the pools and the surprising answer is that there are none. Even the origin of the name remains a mystery and we can only assume that the pools were so called due to their magical appearance … or perhaps someone once spotted the fairies taking a dip here. 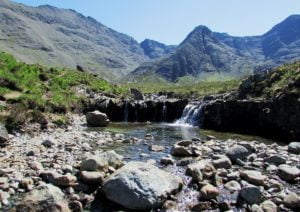