Nature lovers, history enthusiasts, outdoor devotees, admirers of the sublime and cheese connoisseurs rejoice – Cheddar Gorge has it all. Residing in an area of outstanding natural beauty within the heart of Somerset, this strikingly iconic gorge is the largest in Britain and one of the most breath-taking natural sights within the UK.

Carved out over the last million years by melt-water floods during the Ice Age, this magnificent colossus amid Mother Nature’s earthly sculptures lies at an impressive 400ft depth and stretches for three sweeping miles. And boasting an infinite list of attractions, from its renowned rock-climbing activities to the riveting prehistoric tales hidden in the depths of its enchanting subterranean caverns, it’s no wonder that Cheddar Gorge draws in a staggering 500,000 visitors per year.

History of the Gorge and its Caves

When global warming swept through the earth and brought the Ice Age to a halt some 14,700 years ago, tribes of hunter-gatherers are said to have migrated North from warmer southerly territories such as France and Spain and settled in the somewhat chillier region of Britain. A handful of these prehistoric nomads were found to have inhabited a cavern lying beneath the gorge – known as Gough’s Cave – and are understood to be amongst the first settlers to have repopulated Britain following the Ice Age.

Much of this information was unearthed in the discovery of one set of human remains believed to be around 9,000 years old – aptly named Cheddar Man – in Gough’s Cave, coined after the Victorian showman and excavator Richard Gough, whose Uncle (George Cox) had previously made a smaller discovery nearby; namely Cox’s cave.
One of the more grisly truths to have been exposed with these findings is that of the telling signs etched into the skeleton’s bones. With identical marks having been found on the bones of animals butchered in such a way as to skilfully extract every last morsel of nutrition, it suggests that these prehistoric cave dwellers had also acquired a chilling taste for human meat.

Not to everyone’s taste, of course. And so, thousands of years later, the local populace seem to have decided it would be more beneficial for the community spirit to turn their hand towards cheese making – and what a decision it turned out to be. Churning out over 50% of Britain’s 2.7 billion pound annual cheese market, this globally renowned produce is by far the most popular cheese in Britain, and is believed to have been in the making for around 850 years. Admirably, this practice is still upheld by the Cheddar Gorge Cheese Company, who continue to make use of the perfect humidity within the caves for maturing the cheese – incredibly, the only producers left in the world to do so.

The Cheddar Man – discovered shortly after the turn of the 20th century in 1903 and thought to be over 9,000 years old – is the UK’s oldest complete human skeleton. Fascinatingly, with the help of DNA testing, scientists have discovered that one of his true descendants still resides in Cheddar; and who, ironically enough, is a local history teacher.

J.R.R. Tolkien’s masterpiece of creational fantasy, The Lord of the Rings, owes a little of its inspiration to the captivatingly spooky caverns that lie beneath the gorge, with the author himself citing them as the inspiration for Helm’s Deep in The Two Towers.

During the era of the Saxon Kings of Wessex, the surrounding forests of Cheddar were used as royal hunting grounds, with the remains of a Saxon royal palace being found in the area during the 1960s.

As early as 1170 AD, the nearby village of Cheddar is recorded as having sourced its wealth through the production of cheese.

What to do at Cheddar Gorge

Renowned for its expansive rock climbing facilities, the face of Cheddar Gorge can be seen to smile invitingly for enthusiasts and beginners alike.

Not a fan of dangling off cliff faces? Well, luckily enough there’s the option get up there on foot. Conquering the 247-step stairway known as Jacob’s Ladder, you’ll be rewarded with some dramatic views, made further exhilarating by the three-mile cliff trail.

Or if scaling the gorge doesn’t appeal to you, why not burrow beneath it? Gough’s cave and Cox’s cave, both stunningly decorated with stalactites and stalagmites, are openly available for underground expeditions all the year round.

And for the more daring of explorers, there’s even caving opportunities with the team X-Treme – although be warned, a considerable drenching may occur.

Where to stay near Cheddar Gorge

There is an extensive range of accommodation near Cheddar Gorge, with local hotels, B&Bs and camping sites openly welcoming visitors all year round. 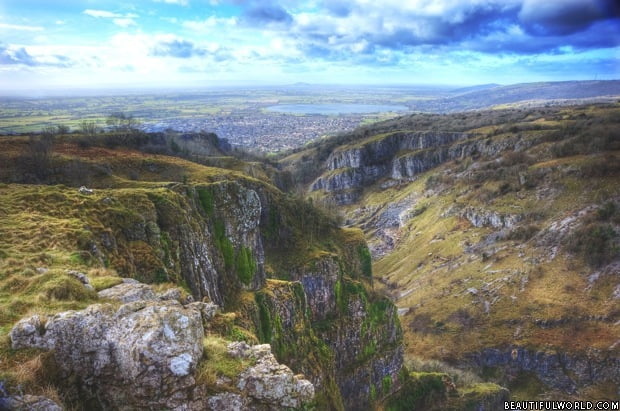 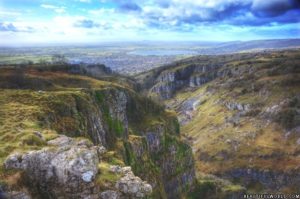