Chile is a remarkable country endowed with some of the world’s most spectacular scenery but for lovers of mountains, lakes and glaciers, the Torres del Paine National Park has deservedly become one of the country’s major attractions with over a quarter of a million visitors per annum over half of whom travel from other countries.

Its southerly location in Chilean Patagonia would seem to place it far off the mainstream tourist map but its popularity is growing and those who have visited this beautiful area have no hesitation in saying that the long trip was well worthwhile. The Torres del Paine National Park (Parque Nacional Torres del Paine in Spanish) has coordinates of 51 degrees south and 73 degrees west and it centres on the Cordilla Paine mountain range which forms a spur from the southern Andes.

The entire west side of the park is covered by the huge southern Patagonia icefield but the rest of the park offers a diversity of landscape types including forests, shrub-land, Andean desert and the Pampas-like Patagonia steppe. The park was first established in 1959 at which time it was known as the Parque Nacional de Tourismo Lago Grey (Lake Grey Tourist National Park) but was given its present name in 1970, the name referring to the park’s most famous peaks. The Paine Massif is a granite intrusion through Cretaceous sedimentary rocks resulting in the formation of huge towers and spires. The three most famous peaks are called the Torres del Paine.

Most place names in this part of the world have a strong Hispanic influence and the first part of this name certainly means “towers of” but the word “Paine” is said to be derived from the now extinct Teheulche language and means “blue” so the full translation is “Towers of Blue”. The most likely reason for this name is that, when viewed from a distance, the mountains often have a blue hue. This distant blue landscape is by no means exclusive to mountains however with the sky, lakes and forests also showing various shades of blue. Some who have undertaken the challenging hikes and climbs in the park could well be forgiven for believing that “Towers of Pain” could be a more apt description but the correct pronunciation is: TOR-RAYS-DEL-PINE-AY.

There is no local airport serving the Torres del Paine National Park. Those visitors arriving by air should fly to Puntas Arenas or, if coming from Argentina, El Calafate.

How to get to Torres del Paine National Park

There are several well-established ways of reaching the park but all are quite time-consuming so the travel-time really needs to be factored into any itinerary. The nearest airport is at Puntas Arenas (a 3,100 km flight from Santiago). This flight usually takes around 3.5 hours non-stop or around 5 hours with a stop-over at Puerto Montt. From Puntas Arenas, the final leg of the journey must be made by road (bus or hire-car). This involves a 3 hour journey to Puerto Natales and a further 2 hour trip to reach the Torres del Paine National Park. Visitors from Argentina usually fly to El Calafate with regular flights from Buenos Aires. A 350 km (4.5 hours) road journey is then needed to reach Puerto Natales and, as above, a further 2 hours to reach the nearest gate of the park.

The trip can, of course, be completed entirely by road and bus services are available. Travelling from Santiago involves passing through Puerto Montt and then on to Puerto Natales with a large part of the journey being through Argentina. The journey can take up to 36 hours and involves sleeping on the bus so may not suit everyone. On the positive side, the route is very scenic and can form an enjoyable part of the expedition. There is also the option of arriving by sea and regular services are available but these do involve considerable expense and a three-day sea trip.

Most people have heard of Patagonia and know that it is located in South America but some may be surprised to know that it is not and never has been regarded as a country, neither is it a geographical feature or political region. It is simply a part the South American continent that was given this name by 16th-century explorers, probably including Magellan, who reported that this land was inhabited by giants who they called “Patagons”. Modern-day Patagonia is shared between Chile (10%) and Argentina (90%) and is the southern part of the continent with its northern limits usually being regarded as the Reloncavi Estuary in Chile and the Colorado and Barrancas Rivers in Argentina. The southern archipelago of Tierra del Fuego may or may not be regarded as forming part of Patagonia.

The park covers an area of 242,242 hectares (598,593 acres). It includes an area designated as a World Biosphere Reserve by UNESCO in 1978. The park’s main attractions are: Cordillera del Paine, French Valley, Grey Glacier and Los Cuernos. Many of the mountain peaks have not been accurately measured leading to some variations in reported altitudes but an exception is the Cerro Paine Grande which has been measured using GPS instrumentation and, at 2884 metres, is the park’s highest peak.

Torres del Paine National Park is one of the last remaining places where truly wild guanacos can be found. The guanaco is a wild relative of the domesticated llama and alpaca. When threatened, they have a habit of spitting. The flightless Darwin’s rhea also makes its home on the open plains of the park. Pumas, foxes and wild horses also roam the area. Over 100 different species of bird have been recorded including the mighty Andean condor. There are many beautiful and colourful species of flowers including the calceolaria and 7 different orchids. This is also the home of the lupin which grows freely.

Reaching the Torres del Paine Nation Park is just the beginning of the adventure and at the park the first essential requirement is a map showing the many attractions and designated trails. It would be easy to be overwhelmed by the extent of this beautiful landscape and feel that only a small area could be accessed but the park’s well-marked trails have been designed to give the maximum benefit for those wishing to immerse themselves in this incredibly beautiful place. The iconic Torres del Paine peaks can of course be easily viewed but for those who choose to complete the full circuit trek, they can be seen from all angles. Maps of the park also show the locations of the many facilities for visitors such as hotels, restaurants and refugios (mountain refuges).

The Torres del Paine National Park has been described as a hikers’ paradise and this is no exaggeration. Many people remark that they find it hard to believe that such a beautiful place exists. The reflections of snow-capped mountains in the waters of the lakes is beautiful in itself but when the lake is filled with vivid blue icebergs the effect is truly magical. The most popular trek is known as the “W” route due to the fact that the trails roughly approximate to the shape of a capital letter “W”. The bottom points of the W are the starting points and there are three different legs to be explored including to Lake Grey where the Grey Glacier deposits its icebergs in a process referred to as “calving”. The “W” trek provides 70 km of pathways and most visitors spend around 5 days exploring this route. The more dedicated hiker may wish to consider completing the 110 km “O” route which provides a circuit of the park. It is physically demanding and usually takes 8 or 9 days but does avoid some of the backtracking which is inevitable on the “W” route. Refugios, camp-sites and hotels are strategically located throughout the park but pre-booking is required. No camping or overnight stops are allowed other than in designated locations. Due to the ever-present fire risk, no wood fires are allowed anywhere in the park and cooking stoves can only be used in designated areas such as camp-sites.

A visit to the Torres del Paine National Park is certainly different to most organised tours but it is possible to opt for a visit where an experienced tour operator does most of the planning arranging for transport and accommodation. Boat trips on the lakes are always popular with some visitors preferring a short cruise with others opting for kayaks. The alternative way of arriving by sea should also not be overlooked and may be the preferred choice of those seeking an all-inclusive holiday.

There are no shortages of accommodation options within the park and some may prefer the camping option such as that offered by Patagonia Camp or regular hotels such as the Hotel Lago Grey which is a three-star hotel with good reviews. Hostel-type accommodation is also available and some may be pleasantly surprised by the standards and facilities of the “refugios” which are usually much better equipped than the remote shepherds’ huts that some may be expecting. The important thing to remember is that all accommodation, of all types, must be booked in advance.

With snow-capped mountains, ice-fields, glaciers and icebergs, most visitors will be prepared for inclement weather but this area has a climate officially classified as being “temperate”. This means that extremes of temperature do not occur but summer temperatures rarely rise above 16 degrees Celsius with winter temperatures hovering around zero. Moderate levels of rainfall can be expected at any time of year but this is heaviest during the summer months. The weather can be summarised as being cool in summer, fairly cold in winter and damp at all times. This may sound fairly benign but this is not the whole story. Most people are familiar with tales about sailing ships battling ferocious storms as they rounded Cape Horn and the weather in this part of the world is the stuff of legends. Storms can appear suddenly and winds of up to 110 mph have been recorded on some of the plains. Storms are most frequent in summer but can arise at any time of year. Within the park, there is also a great deal of regional variation in weather patterns due to altitude, topography and the presence of the huge soIcefieldatagonia icefield. The weather may be moderated to some extent by the influence of the cold southern waters but it is far from calm and predictable. Visitors at all times of the year should come prepared with suitable warm waterproof clothing.

The most popular times to visit the park are from September to April during the southern hemisphere spring summer and autumn but a visit during winter is also a realistic proposition. The temperatures may be a little lower with more wintry showers and the days a little shorter but many feel that the scenery is even more spectacular in winter. Some authorities have suggested that due to its extreme southern latitude that winter days only have brief periods of daylight but this is untrue. By comparison, in the northern hemisphere, London lies slightly further from the equator at a latitude of 51.5 degrees north so daylight patterns are similar. A visit at any time of year promises to be an unforgettable experience. Torres del Paine … A hikers’ paradise! 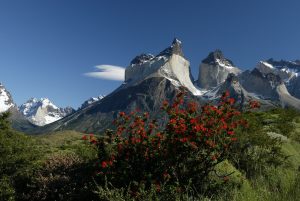