Turquoise seas lapping up on soft white beaches fringed with palm trees set against a backdrop of mangrove and tropical rain forests certainly fits many people’s idea of a holiday paradise especially when coupled with a tropical island climate. The Andaman Islands, set in the Indian Ocean certainly have much to offer but they have rather a dark past and for many of the islands’ past visitors, the Andamans were much more like hell on earth.

The islands, together with the Nicobar Islands form part of a long archipelago at the point where the Bay of Bengal meets the Andaman Sea. There are around 572 islands 36 of which are inhabited. Only about a dozen are accessible by tourists. The Andamans form the northern part of the island chain with the Nicobars to the south separated by the appropriately named ten-degree channel, so called because it lies at a latitude ten degrees north of the equator. The islands are approximately 150 km from Indonesia and 190 km from Myanmar but surprisingly are part of India which lies approximately 190 km to the west, with the exception of a few of the most northerly islands which belong to Myanmar. The islands form one of India’s “Union Territories” and their official name is the Andaman and Nicobar Union Territory of India.

History of the Andaman and Nicobar Islands

The islands have been inhabited for thousands of years and even today have an indigenous population usually described as being Paleolithic (stone age) who shun contact with the outside world. This is the only example of such a culture anywhere in Eurasia. In more modern times, the islands were occupied and claimed by various European countries beginning with the Danish who eventually abandoned the islands probably because of repeated outbreaks of cholera. Austria briefly attempted colonisation again unsuccessfully but it was not until the British established a naval base in 1789 that Europe really gained a foothold. The Danes eventually agreed to sell their claim of sovereignty to the British.

The British built an administration centre on Ross Island but the islands became famous, or rather infamous, as the location of some of the world’s harshest prisons and penal colonies. The Ross Island Prison was completed in 1872 but even before that, incredibly brutal prisons existed. The Viper Island prison gained the nickname of the “Viper Chain Gang Jail” due to the practice of chaining prisoners together through leg-irons. The prisoners were also forced to carry out chain-gang labour. Today the remains of the Viper Island gallows still stands. The British used the prison facilities on the islands to allegedly house the worst and most dangerous criminals but there is no doubt that many Indian political prisoners and freedom fighters were exiled to the islands. It seems likely that the British were following the example of the French and possibly modelling their prisons on Devil’s Island in French Guiana. The purpose of such prisons was clearly based on a policy of vengeance and deterrence rather than reform and rehabilitation. Perhaps the most notorious prison of all was the Cellular Jail at Port Blair where cells were built in long three storey blocks around a central guard building, similar to the spokes of a wheel. Each cell kept its prisoner in solitary confinement and the building was designed to prevent prisoners from even seeing any other cells. A large part of the Cellular Jail has been preserved and is a major visitor attraction.

The islands were briefly occupied by the Japanese during World War 2 before being returned to British control at the end of the war. The Independence of India and Myanmar (Burma) saw the end of British involvement and the Islands became part of the Indian Union.

The islands are rapidly gaining popularity as a tourist destination and most visitors arrive by air. Port Blair has an international airport, Veer Savarkar Airport, but almost all flights are from India. The airport is also used by the Indian Air Force. Foreign scheduled flights are also allowed but few international operators fly to the islands.

The other alternative is to arrive by ship. Ships leave from Chennai, Kolkata and Visakhapatnam but only a few times each month. Sea passage takes around two or three days depending on conditions and it should be noted that there can be some violent storms in these waters. The air trip on the other hand should take around two hours.

Indian nationals require no special permissions to visit the islands but foreign visitors are required to be in possession of a “Restricted Area Permit”. The easiest way to obtain a permit is at the point of arrival. The “RAP” gives details as to which parts are accessible and which are off-limits. The Nicobar Islands are not allowed to be visited and native areas must also be strictly avoided. Travelling between the islands is fairly simple and ferries are in operation along with private hire vessels.

Places to Visit on the Andaman Islands

Many visitors will be attracted by the islands’ history and there are many reminders of the colonial past. The natural splendour of the islands is also incredible. There is a huge range of plant and animal species some of which are endemic. The islands have no fewer than 96 sanctuaries and 9 National Parks including the Narcondum Hornbill Sanctuary and the Mahatma Gandhi Marine National Park and a Biosphere Reserve. For many people, however, those incredible beaches will be the main attraction and those on Havelock Island are considered to be some of the finest. Radhangar beach on Havelock was named as Asia’s best beach by Time magazine in 2004.

Tourism is rapidly developing into a major part of the islands’ economy and there is always plenty to do especially for those looking to enjoy the islands’ natural beauty. Water sports are a major attraction and the coral reefs offer some fine opportunities for snorkelling and scuba diving. Local guides are essential for reasons of safety. There are salt water crocodiles but these are rarely seen in the open sea tending to stay around the estuaries and mangrove forests. Hiking and island camping are also very popular. Kayaking and other forms of boating are available and some of the beaches are suitable for surfing. The opportunities to enjoy night-life are also expanding with many good shows appearing.

The Best Time to Visit

The temperatures in this part of the world vary little and are generally around 23 to 25 degrees Celsius coupled with a refreshing sea breeze. A visit at any time of the year is likely to be an enjoyable experience but it is well to remember that the south-west monsoon normally hits the islands towards the end of May and the north-east monsoon arrives in November. The rain forests are at their most vibrant during these wet seasons and diving is said to be at its best between December and April. Visitors from India may find the island climate a refreshing escape from the heat of an Indian summer or a chilly winter in the northern states so May to July and December to January are often favoured.

It certainly seems that visiting the Andaman Islands is now a much more agreeable experience than it once was. 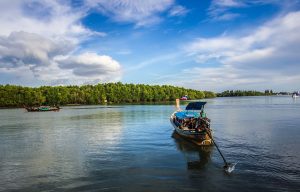