This is a place where the warm turquoise and aquamarine waters of the Indian Ocean present a vivid contrast as they gently lap up on the soft white sandy beaches set against a backdrop of totally unspoilt natural beauty. The beaches of the Seychelles have been described as being the most beautiful in the world and few people would disagree. It is hardly surprising therefore that these islands are also sometimes referred to as the Paradise Islands. For many travellers, the beaches alone would put the Seychelles high on any “Places to Visit” list but these islands have much more to offer.

The Republic of Seychelles, to give the official name, is an archipelago consisting of 115 separate islands most of which are uninhabited. The islands are set in the western part of the Indian Ocean at a distance of between 480 and 1600 km from the east coast of Africa and to the north of Madagascar. At a latitude of 4 to 10 degrees south of the equator, they form what can best be described as a tropical island paradise.

The islands have a total land area of 455 sq km and the islands fall into two distinct types. The largest islands are formed from granite which is unusual and the granitic islands of the Seychelles are the oldest mid-oceanic granite islands in the world. 41 of the islands are of granite including the main island of Mahé which is also the location of the Seychelles capital, Victoria and the Seychelles International Airport (code SEZ). The granitic islands are generally considered to form the cultural and economic hub of the nation and, being the homes of those beaches of legendary beauty, tend to be the main centre of the tourism industry. In this part of the world, conditions are ideal for coral growth and 74 islands are of coral, normally being in the form of low-lying reefs and atolls. The main islands are classified as being “tropical rain forest” and they are heavily forested but in some areas human intervention in the form of spice and coconut plantations has altered the natural ecosystems to some extent.

Compared to most nations, this is a new country and the islands were largely uninhabited until the French settlers arrived in the 18th century. The islands were named after Louis XV’s Minister of Finance, Jean Moreau de Séchelles in 1756. During the Napoleonic Wars between France and Britain, the Islands were taken by the British but, rather than engaging in conflict, a negotiated settlement allowed for many of the ruling French to retain their high ranks and privileges. Following Napoleon’s defeat at Waterloo, the position was ratified and the Seychelles were formally recognised as a British territory by the 1814 Treaty of Paris. The Republic of Seychelles was formed in 1976 when the islands gained independence from Britain to become an independent nation within the British Commonwealth. There has been some political instability in the past with military coups and attempted coups. During the 1970s, the Seychelles gained a reputation as being a playground for the rich and famous and the opening of the Seychelles International Airport, officially opened by H.M. Queen Elizabeth II in 1972, enabled it to more fully cater for the International “Jet-Set”. Many years ago, the islands were used as a retreat for pirates and even today piracy is a serious problem for the Seychellois government and armed forces.

There are many great things about the Seychelles but perhaps the greatest are the Seychellois people. These islands have no indigenous population meaning that everyone has links to another part of the world. In addition to the British and French influences, people have arrived from Africa, India, China and all corners of the world. This is true melting pot of race, religion and culture. Racial harmony is a way of life for the Creole nation and the wide range of different backgrounds is reflected in their music and food. The predominant religion is Roman Catholicism but other faiths are also to be found such as Hindu and Muslim communities. There are three official languages those being Creole or Seselwa (which is French based), French and English but many people are also fluent in Italian or German. The population is currently around 93,000.

The Seychelles boasts two UNESCO World Heritage Sites, the First being Vallée de Mai on Praslin where the Coco-de-Mer nuts grow on ancient palms. This nut is the world’s largest and is extremely rare. The second site is Aldabra which is the world’s largest raised coral atoll and the home of the Aldabra giant tortoise.

The Seychelles climate is usually described as being “pleasantly warm” at all times of the year. Its tropical latitude is moderated by marine influences and the temperature rarely strays from the 24 to 32 degrees Celsius range. Weather is generally calm and, with the exception of the most remote southern islands, the Seychelles lie outside the usual cyclone belt but a major cyclone did hit in 2013 causing extensive damage. This is usually blamed on the changing weather patterns associated with global climate change. May to October tends to be the driest and coolest (relatively) with fresh winds of 19 to 37 km/hr. There is little rainfall at this time often with prolonged dry spells. December to April brings the highest temperatures accompanied by high levels of humidity, making the prospect of a dip in the sea even more attractive.

Many visitors choose to explore the major islands of Mahé, Praslin, Silhouette Island, La Digue, Curieuse, Félicité and Frégate but many other islands can be visited by air or sea and currently 16 of the islands offer accommodation some of which can be extremely luxurious. But a range of different types of accommodation is available meaning that visiting the Seychelles is no longer exclusively for the world’s super-rich. The sea is of course a major attraction with boat trips and scuba diving being very popular. Some parts of the coral structures have suffered from coral bleaching in recent years but many are recovering well. A huge range of marine creatures visit the area including sea turtles and even the gigantic whale shark.

The islands are of immense importance as the home of many unique species. Almost half of all of the land area has protected status. The magpie robin, which was facing extinction 30 years ago with only 14 individuals existing is now steadily increasing in numbers and other rarities include the Seychelles white eagle and the Seychelles warbler. The Aldabra giant tortoise roams free in many areas including the island of Curieuse. These islands have deservedly been described as the Galapagos of the Indian Ocean.

Seychelles time is 4 hours ahead of GMT. No daylight saving scheme is operated. The currency is the Seychellois rupee and no other currencies are normally used. The international telephone dialling code is +248.

Descriptions of the Seychelles invariably include a range of superlatives but it is quite simply one of the most beautiful places on Earth and remarkably uncrowded. The Seychelles tourist service simply describe the Seychelles as “another world”. Perhaps “out of this world” would be even more appropriate. 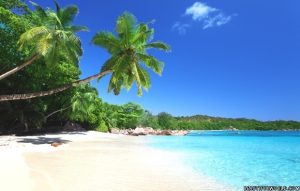