Aitutaki is a small island and atoll situated in the southern group of the Cook Islands in the South Pacific. Although most travellers are aware of the Cook Islands’ reputation of being some of the most beautiful islands in the world, this is an area which is still far off the mainstream tourist radar but for some adventurers, this only adds to its appeal.

The island is known to have been inhabited for over 1,000 years by people of Polynesian descent but was only discovered by Europeans when visited by Captain Bligh aboard HMS Bounty on 11th April 1789 just 17 days prior to the infamous mutiny. Lying approximately halfway between New Zealand and Hawaii, for most people, this is a far-flung destination but those who have visited Aitutaki have no reservations in advising that the long trip is well worthwhile.

Looking at a map, or even better, a satellite image of the Aitutaki atoll shows that it is formed on a triangular coral reef with the main island being located at the northernmost corner of the triangle.

A peninsula leading from the north of the island runs down following the eastern edge of the reef and this is then marked by a series of small islets mainly along the eastern border but with some along the southern and south-western limits.

Within the surrounding islands lies what is arguably the world’s most beautiful lagoon famed for its turquoise waters teeming with marine life. The main island is volcanic as are two of the 15 small islets but the rest are of coral and are generally known as “motus” in this part of the world. A couple of them are more sandy in nature and should officially be described as “sand cays” to distinguish them from the coral rubble or pebbles found on a true motu.

Aitutaki is effectively encircled by a barrier reef but there are some safe routes to the south and on the west side a safe channel leads directly to the harbour of the island’s main village, Arutanga. This is a small island with a total land area of just 18.05 sq km. The highest point is the Maunga Pu hill at the north of the island which reaches an elevation of 123 m. The population of Aitutaki is a little over 2,000.

There are two official languages these being English and Cook Islands Maori (also known as Rarotongan). English is widely known and used in Aitutaki. The currency is the New Zealand Dollar so there should be no problems for visitors from that part of the world. Interestingly, local coins and banknotes are produced and these can only be used within the islands but they are considered to be extremely rare and sought after by collectors.

How Do I Get to Aitutaki?

To say that it is a little off the beaten track is somewhat of an understatement but tourism is definitely becoming a major part of the island’s economy. The island does have an airport which was first built by the Americans during the Second World War and there are regular flights from nearby Rarotonga. Rarotonga has an International Airport and major operators including Air New Zealand and Virgin Australia operate direct flights. Some budget operators also offer flights and it is even possible to obtain a direct flight from Los Angeles. This remains a remote destination however and as an example, a flight from Sydney to Rarotonga will take around 10 hours. After touching down at Aitutaki airport, visitors will usually be met by their hosts and taken to their accommodation. There are no taxis or shuttle services at the airport. It should be noted that all flights between Rarotonga and Aitutaki are operated by Air Rarotonga and prices can be rather high. It is sometimes possible to opt for a last minute booking to obtain a discounted ticket price.

Aitutaki is most definitely not a budget holiday destination and some of the top hotels can be expensive but there are few complaints about the quality of service and accommodation at luxury hotels such as The Pacific Resort. The Aitutaki Lagoon Resort offers beach-front bungalows and The Aitutaki Private Island is exactly what its name suggests and offers over-lagoon bungalows. Slightly more budget friendly are the “garden bungalows and lodges” such as the Aitutaki Village Studio Garden Bungalow. There is no shortage of accommodation and a warm welcome is guaranteed.

What to Do in Aitutaki

this Paradise Island has beaches, warm seas, white coral sands, swaying palm trees and the incredibly blue lagoon is quite stunning. A cruise around the lagoon is considered essential and even the most hardened travellers rate this as a never to be forgotten experience. A trip to the tiny One Foot Island is also not to be missed and this is said to offer the finest view over the world’s most beautiful lagoon. It also has its own Post Office from which it is possible to send postcards to really make friends jealous and it even stamps passports with an appropriately foot-shaped stamp! The church is also a popular attraction being the oldest in the Cook Islands. Each Thursday evening Tamann Beach sees the traditional sunset fire and dance show. Fishing enthusiasts can enjoy some exciting sea-fishing with the chances of landing Marlin or Yellow-Fin Tuna or further adventures can be had underwater by snorkelling in the amazing coral reef.

Although Aitutaki is by no means a tourist hot-spot, its popularity is growing due both to it featuring in travel documentaries and because it has been chosen as the location for several reality TV programmes including the UK TV “Shipwrecked” and “Shipwrecked – Battle of The Islands” which were filmed on the islets of Rupota and Moturakau and the US programme, “Survivor-Cook Islands”. Many people watching these shows cannot help but ask, “Does this kind of Paradise really exist?” and, “Is there any way that I can go there?” Thankfully the answer is yes on both counts but the best advice is not to wait too long.

In many ways Aitutaki is the perfect place to get away from the stresses of everyday life. Getting there requires some planning and expense but most people feel that it is money well spent. It must be one of the most romantic honeymoon destinations imaginable and is surely a place that people never want to leave. Perhaps the thought of leaving this beautiful part of the world was the real reason that the crew of the Bounty decided to mutiny! 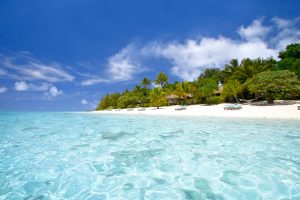