Bryce Canyon is a vast, geological wonder situated in Bryce Canyon National Park, Utah. Despite its name, the canyon isn’t strictly a canyon but rather a collection of naturally formed amphitheatres – sloping performance spaces with echoic and amplifying properties. Colourful spires of sedimentary rock, called hoodoos, create a surreal appearance throughout the park, with lovely wildflowers adding splashes of color. On the plateaus, Ponderosa Pines and a variety of evergreens provide refuge for a diverse selection of animal species. Tall, tapering columns of rock roughly resemble tamarind stained stalagmites, rising from the dusty earth like jagged spires. The elevated area is outstandingly beautiful and remains understandably popular among visitors to the region.

During the 1850s, Mormon pioneers settled in the Bryce Canyon region. In fact, the canyon is named after Ebenezer Bryce, the Scottish homesteader responsible for overseeing the building of Utah’s Pine Valley Chapel, America’s oldest Mormon chapel still in continuous use.

In 1923, the rugged swathes of land surrounding Bryce Canyon were declared a National Monument by the US government. Five years later, the region, which covers almost 34,000 acres, became a designated National Park. 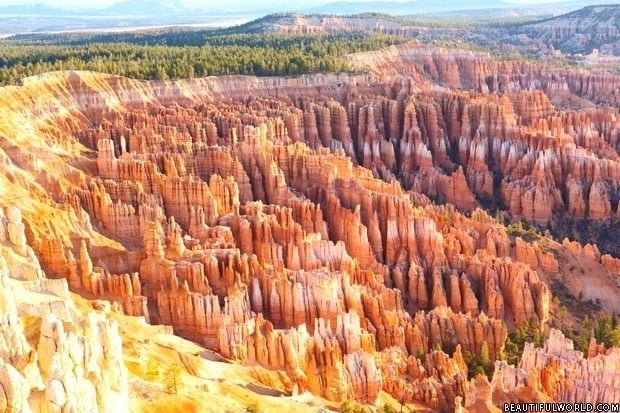 Ebenezer Bryce is reported to have said about the canyon: “It’s a hell of a place to lose a cow!”.

Utah’s indigenous Paiute Indian tribe called the conical hoodoos “legend people”. According to Paiute folklore, the striking columns were formed when mischievous god Coyote chose to turn a crowd gathered on the hillside into stone.

At night, more than 7,500 stars are visible in the skies above Bryce Canyon. In most rural parts of the US, there are approximately 2,500 stars visible.

Although they are seldom seen, black bears, mountain lions, and foxes inhabit the canyon region. 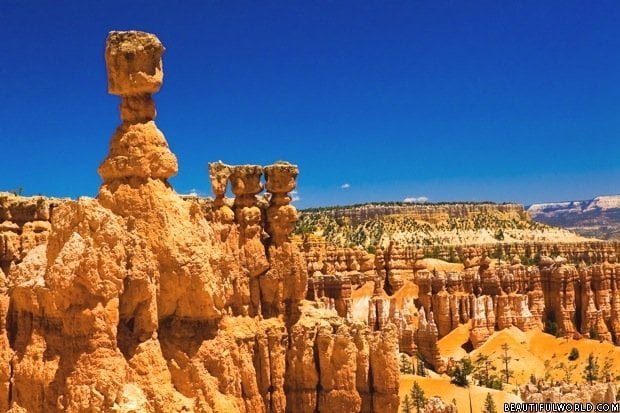 What to do at Bryce Canyon

Bryce Canyon National Park attracts over a million visitors every year. Many come to hike, descending upon numerous trails of various lengths where photo opportunities abound. However, if you are unable or unwilling to walk, several impressive lookout points are just a short shuttle bus ride away.

Guests wishing to navigate the landscape on horseback can join guided riding trails, which run throughout spring, summer, and autumn, and can be booked in advance through independent providers. There are no cycle lanes inside the park; bicycles and motorcycles are permitted but restricted to paved walkways. Scheduled geology talks, guided nature walks and children’s activities also occur, mostly during the summer months; these do not have to be booked in advance. Schedules are available online. 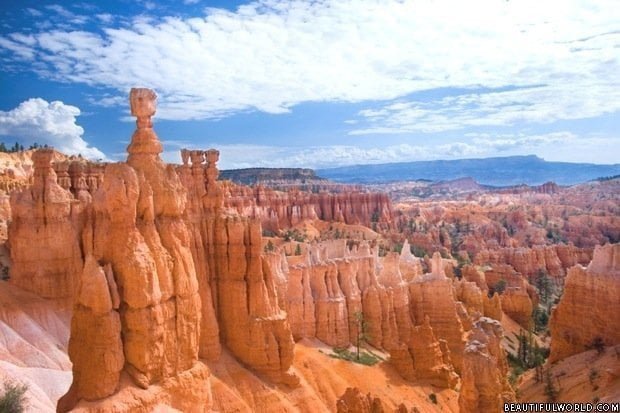 Inspiration Point is a popular lookout point boasting easy access. This tremendous view allows visitors to gaze out over the main amphitheatre, marvelling at hundreds of intricate hoodoos and Bristlecone Pines.

Entrants to Bryce Canyon National Park are usually charged a minor fee. However, there are a number of fee free days, such as Martin Luther King Day, National Park week, National Public Land day, and Veterans Day weekend. A variety of passes are available and no reservations are required. The entry fee includes free, unlimited access to park shuttle buses during high season (May – October).

Bryce Canyon Lodge boasts a post office, souvenir shop and restaurant. Groceries can be purchased from the General Store at Sunrise Point. The park is open 24 hours a day all year round. 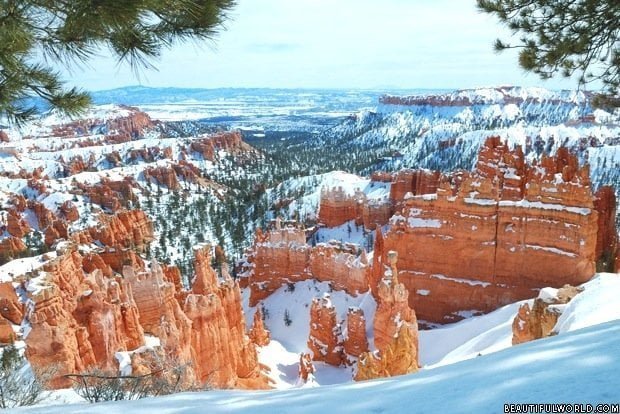 How to Get to Bryce Canyon

Park shuttle buses run during high season, from before sunrise until deep into the night. The bus enables visitors to park their vehicles off-site and explore areas of outstanding natural beauty on foot. Car parking facilities can get extremely congested during the summer, and therefore use of the shuttle buses is highly recommended.
Twice daily, between May and October, the park offers a guided bus tour to Rainbow Point. The free tour takes 3.5 hours and departs at 9:00 AM and 1:30 PM. Alternatively, a number of tour providers run excursions to the canyon, which can be arranged off-site in advance. 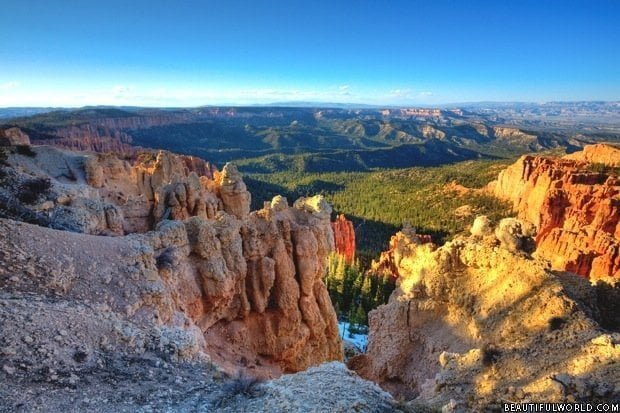 When to Visit Bryce Canyon

Although the park is open all year round, it is at its busiest during the summer months – when warm, dry weather ensures good walking conditions and spectacular views. Shuttle buses run during high season and the majority of talks, guided tours, and activities will be scheduled to take place over this period. The Bryce Canyon Annual Astronomy Festival, for example, takes place every year at the end of June.

Where to Stay at Bryce Canyon

Camping is permitted in Bryce Canyon National Park though permits are required and fees are levied. Designated campsites are located close to the canyon. Remember though, that campfires are strictly prohibited.
Alternatively, Bryce Canyon lodge accepts bookings between March 29 and November 10. Reservations are highly recommended. This establishment opened in 1925, and is considered one of the parks architectural treasures. There are also a number of hotels and lodges in the surrounding areas, the majority of which offer excursions to Bryce Canyon. 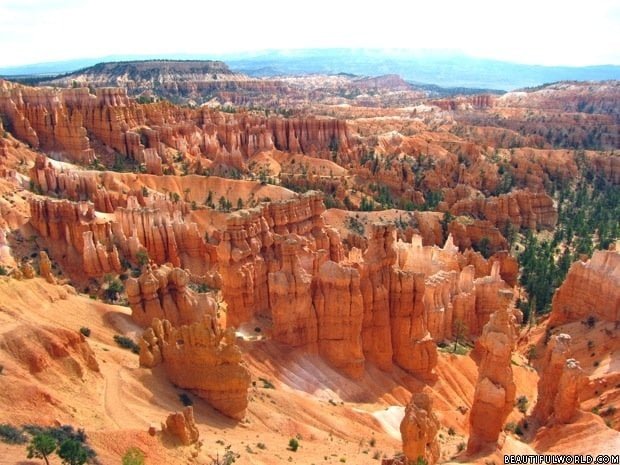 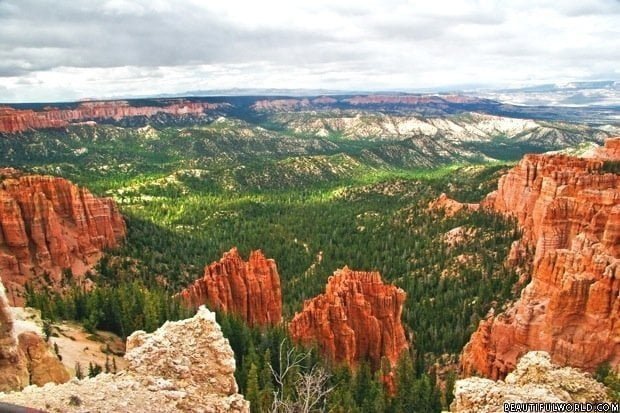 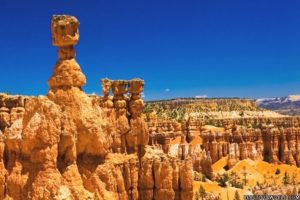