Matterhorn mountain is situated in the Pennine Alps on the border between Switzerland and Italy. It is one of the most famous and distinctive of all Alpine peaks. The Matterhorn is a pyramidal-shaped colossus, standing at a skyline-dominating elevation of 4478 metres (14,690 feet tall) which makes it the sixth highest mountain in the Alps and in Europe. Its four steep faces rise above the nearby glaciers and face the four compass points, north, east, south and west. Although not the highest peak in the Alps its fame is due to its almost impossible shape; an unusual landform with a summit that appears to extend over its north face, making it look like a cobra about to strike.

The formation of the Matterhorn (and the rest of the Alps) began some 50 to 60 million years ago when the African and Eurasian tectonic plates collided, and layers of sedimentary rock that had formed in the seas between them were thrust up above sea level. Experts suggest that the Matterhorn began as a rounded hill, but gained its distinct pyramidal shape as a result of natural erosive forces over the last million years. 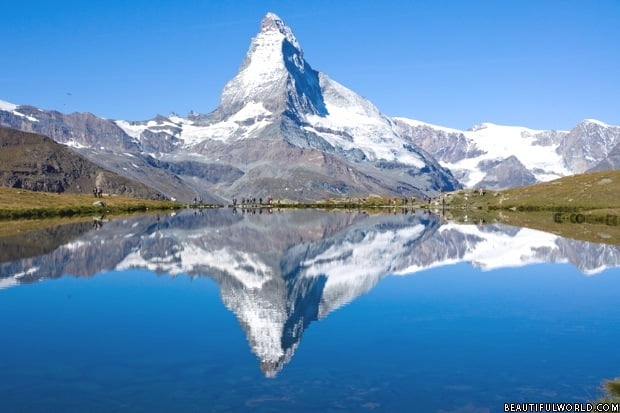 The first successful ascent of this iconic peak was on July 14, 1865 by a team led by English illustrator, climber and explorer Edward Whymper. He had previously made several unsuccessful attempts on the summit. The climb was marred by tragedy as four team members lost their lives in a fall just below the summit during the descent. The second ascent occurred just three days after Whymper’s triumph, from the Italian side. The mountain’s difficult north face wasn’t climbed until July 31 and August 1, 1931.

The Matterhorn’s north face overlooks the Swiss Zmutt Valley, whilst the south stands guard over the Italian ski resort village of Breuil-Cervinia. The Theodul Pass, a trade route used by Ancient Romans and Celts as early as 100BC connects the two destinations. Unknown to most, the Romans originally named the Matterhorn, ‘Mons Silvius’. In fact, it wasn’t until sometime during the 1500’s that Germans named the mountain, the Matterhorn, derived from “matte” meaning meadow and “horn” meaning peak.

Walt Disney and his family frequently visited Zermatt, a swiss village, which lies in the valley facing the north side of the peak. Captivated by the mountain and enchanted by the surrounding scenery, Walt Disney returned to California and began the construction of his now famous Matterhorn bobsled ride. 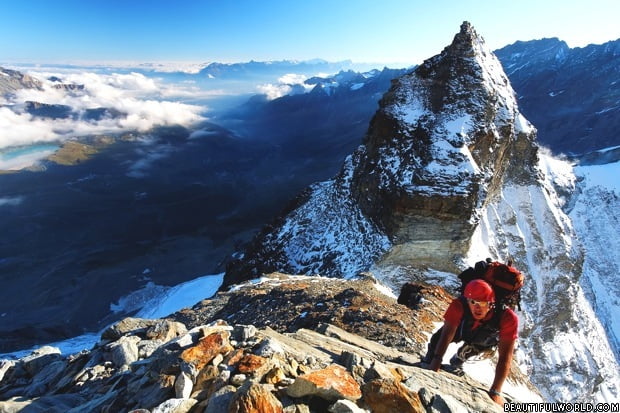 The climbs are long and demanding and it’s essential that climbers have previous alpine mountaineering experience. The usual route is up the Hörnli ridge, also called the North-East ridge. This is the central ridge that can be seen from the village of Zermatt at the foot of the mountain. The ascent starts at Hörnli Hut, a mountain hut situated at 3,260 metres (10,700 ft.) above sea level. It involves 4,000 feet of climbing and takes around six hours up and five hours down. There are fixed ropes on some parts of the climb. Although this is considered the easiest ascent it has an AD (fairly difficult) rating.

Other routes on the mountain include the Zmutt ridge, the north face, and the Italian ridge (South-West or ‘Lion’ ridge) which was the route taken by the party that reached the summit three days after Whymper. 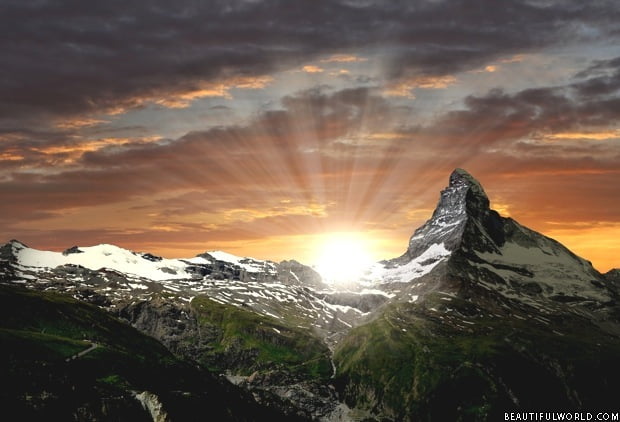 When To Climb Matterhorn Mountain

If you are attempting to climb the Matterhorn the best times are from mid-July to mid-September, depending on the amount of snow on the mountain. However, it’s important to bear in mind that the weather on the mountain is dangerously unpredictable and changes commonly occur throughout the day. 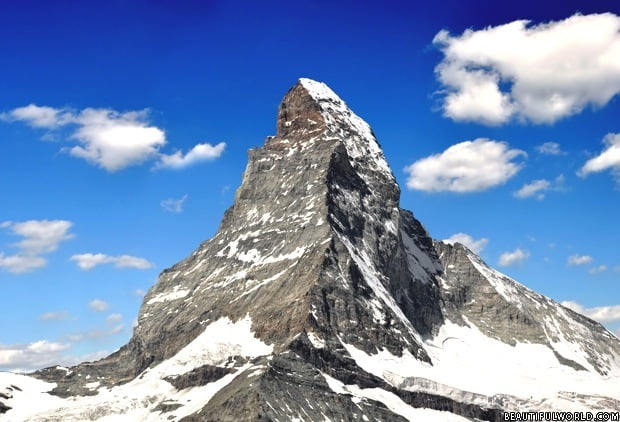 The Gornergrat (3’089 m), Matterhorn glacier paradise (3’883 m) and the Rothorn (3’103 m) are areas of the mountain accessible by lifts. Some lifts operate for 365 days of the year which means you can access great skiing in Winter and in the rest of the year you can go walking in this stunning part of the world.

In the Winter season, there is a staggering 360 km of pistes over 145 ski runs accessed by 53 lifts; 75 km of blue runs, 220 km of red runs, 27 km of black runs and 38 km of yellow freeride trails. There is also a beginners park. The Matterhorn glacier paradise offers 365 day a year skiing and snowboarding. It is the highest ski area in the Alps at over 4000m above sea level so even in Summer it is possible to ski and snowboard here. Note that you need to get up early as conditions are good in the mornings but not great in the afternoon when the surface of the snow becomes slushy.

Freestyle riders can enjoy the Zermatt Snow Park on the Theodul Glacier for around 300 days of every year. There are kickers, rails and obstacles for beginners and experts alike.

Because of the infrastructure in place for skiers this is a great area for walking and hiking. You can use the ski lifts to access a huge area of these mountains without having to make exhausting steep ascents. The 400km network of hiking trails allows you to view up to 38 4000m peaks in the surrounding area. The flower-filled Alpine meadows, lovely streams and crystal clear lakes are surrounded by stunning mountain backdrops. It is a walkers and photographers paradise. 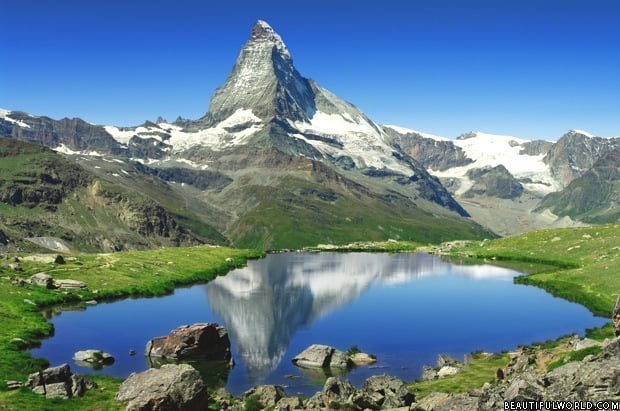 There is 365 day a year skiing here so for the highest walking areas be prepared for low temperatures. However, the lower areas offer the perfect hiking conditions in the summer. The sheer volume of trails means there is something for everyone, from tough routes for experienced hikers to simple nature trails with play areas for the kids. 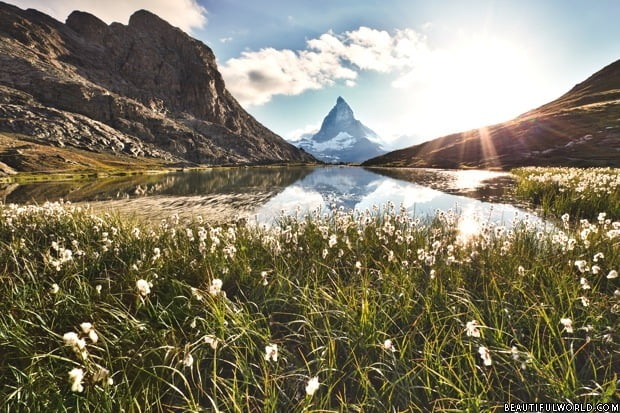 Zermatt is the world-renowned resort village at the foot of the Matterhorn, boasting luxury hotels, boutiques, restaurants and health spas. In addition, there are a large number of rental chalets and apartments. It is situated in the canton of Valais in the west of Switzerland.

How To Get To The Matterhorn / Zermatt

International flights into Switzerland arrive at either Geneva or Zurich airports, with both providing easy access to Zermatt through the Swiss rail network. Train is the most convenient way to get to Zermatt as it is a car-free village. Only electric cars are allowed to operate within its boundaries. 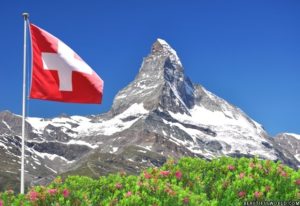