Croatia is noted for its spectacular scenery and wonderful Mediterranean climate. Nowhere is this more so than in the historical region of Dalmatia which borders the Adriatic sea. Just a few kilometres north-east of the city of Sibenik can be found the Krka National Park. The National Park was declared in 1985 and it is now a very popular destination both for those interested in Croatian history and more especially for those who love waterfalls.

As its name suggests, the Park is based around the Krka River and it covers an area of 109 sq km including all seven of the river’s waterfalls. From a geological perspective, this whole area is predominantly a karst topography meaning that the rocks are of limestone which is easily eroded and sculpted by water. Rivers flowing in karst landscapes tend to form deep canyons usually accompanied by caves and underground water flows. The limestone-enriched waters however also tend to cause new rocks to grow in a similar way to the familiar stalactites and stalagmites. In rivers, the new rocks usually manifest themselves in the form of shelves or ledges but sometimes form more intricate shapes. Any description of the Krka River will invariably refer to its “travertine” features and these are simply the new rock formations which tend to be covered with various mosses, algae and other vegetation.

The Krka river drops by a total height of 242 m as it passes through a series of cascades and waterfalls and these are generally regarded as being some of the most beautiful in the world. The two lowest waterfalls are the most visited but all have unique character and beauty.

Starting with the highest these are as follows:

Bilusica buk – This spectacular waterfall is located 9 km downstream from Knin and in the past some attempts have been made to limit the flow of water in order to prevent flooding. Parts of the waterfall were blasted using dynamite but it remains immensely powerful throughout the year.

Brljan – 2 km downstream from Bilusica buk, the river exits its narrow canyon and flows into Coric Lake. This lake was formed partly by the natural travertine barriers and partly by the construction of a concrete dam in order to regulate the flow for the Miljacka hydroelectric plant. The waterfall in this area takes the form of a series of cascades around 300 m long, 180 m wide and having a drop of 15.5 m. The power of the river has long been exploited here and the remains of old mills can be seen. There are also remains of old Roman activity nearby such as a military camp. Due to the fact that water from the lake is diverted for hydroelectric use, the water levels fall during the hot dry summer months resulting in the falls and the riverbed drying up for a time.

Manojlovac slap – Following the river for another 0.5 km, leads to what is the largest and generally considered to be the most spectacular waterfall on the Krka River. At Manojlovac slap (slap means waterfall) there is a total drop of 59.6 m flowing over a rocky course around 80 m wide and 500 m long. At the foot of the falls, the ruins of old mills can be seen. Like the Brljan above, these falls do run dry for a period in summer.

Rosnjak – The Krka River then runs through a narrow steep-sided canyon and after 1 km the most secretive of the seven waterfalls can be found. Rosnjak, sometimes locally referred to as “The Altar”, consists of a single step and a fall of 8.4 m. This waterfall is generally considered as being inaccessible and can only be viewed from a distance.

Miljacka slap – After another kilometre, the river falls 23.8 m over the Miljacka slap cascade. This takes the form of three large steps and numerous smaller ones. This is the site of the Miljacka hydroelectric plant and the remains of early mills can be seen. Just 100 m below the falls is the Miljacka II cave which is the home to many rare species including the long-fingered bat.

The 6th waterfall is vast and the waters drop by 22.5 m as they enter the Visovac Lake. There are many different streams of water over a width of around 450 m. The upper, narrower, section is known locally as “The Necklace”. There are many steps and shelves including small islands. This is the site of the Roski slap hydroelectric plant. There is a long history of using the river’s power and here can be found old mills, some of which have been restored along with other interesting features such as stone pillars and washing holes previously used in the wool industry.

Shradinski buk – The final waterfall carries the combined waters of both the Krka and Cikola rivers. This is located 13 km from Roski slap and is again immense dropping 45.7 m in a series of 17 steps over a length of 800 m and width of up to 400 m. There are many small rocky islands and even caves within the area of the cascade. Here again can be found old mills, pillars and washing holes.

The waterfalls are of course the main attraction but the historical significance of this area should not be overlooked. Many interesting artefacts are on display and there is a gift shop. The tiny river island of Visovac is steeped in history and it is the site of both a Church and a Franciscan monastery. It has long been a place of pilgrimage but can now easily be visited on a boat trip. The island even has its own museum. Staying with the religious theme, Krka Monastery situated in a bay on the river 3.5 km east of Kistange is well worth a visit. There is also a church on the site with ancient Roman catacombs below which are open to the public.

The one feature of Krka National Park that makes it different to so many others is the fact that swimming is allowed in certain designated areas and there can surely be a no more beautiful swimming pool.

Krka National Park is a very popular attraction but is often overlooked by visitors to Croatia as it seem to be some way from the beaten tourist trail. It is fairly easy to locate and even Google maps show the extent of the park boundary. Once at the park, detailed maps showing the many interesting features are available. Admission costs vary throughout the season being most expensive from June to September. The adult admission cost is currently between 30 and 110 Croatian kuna (approximately $5.00 to $20.00 US Dollars).

Krka National Park may still not feature as an international tourist hotspot but Split most certainly does. Any visitor to Split really should put some time aside to visit this beautiful place. The good news is that travelling from Split to the park can easily be done using public transport but for those who prefer having their trips planned for them, there are many tour operators offering day trips to the park with everything prearranged. These trips can be very reasonably priced.

So most visitors to this part of the world agree that there is much more to Dalmatia than spotty dogs but when it comes to incredibly beautiful waterfalls Krka National Park is definitely spot-on! 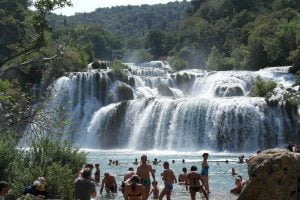