Gullfoss is a tiered waterfall, with a total height of 105 feet (32m). Born from the Hvita River, the crevice is hidden from sight at close range, making it appear as though the river simply vanishes into the earth. There’s a famous story about a girl who walked barefoot from Reykjavic to Gullfoss in order to protest the use of the falls for the purpose of generating hydroelectric energy. She is said to have kept the falls safe from inference, and as such, a statue has been erected in her honor near the falls.

The Gullfoss waterfall is also known as the ‘Golden Falls’ since on a sunny day, the water takes a golden-brown colour. This is due to the fact that its source is the Langjökull glacier which carries lots of sediments that the glacial ice has carved off the Earth over the years. 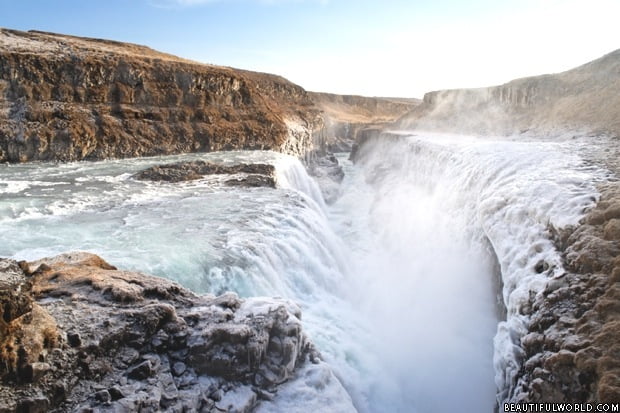 The Gullfoss waterfall once came close to falling foul to a private hydroelectricity project, though insufficient funds, fortunately, resulted in the waterfall being sold to the state of Iceland. Despite Iceland flirting with the idea of utilizing the river for hydroelectricity, the waterfall was eventually conserved. 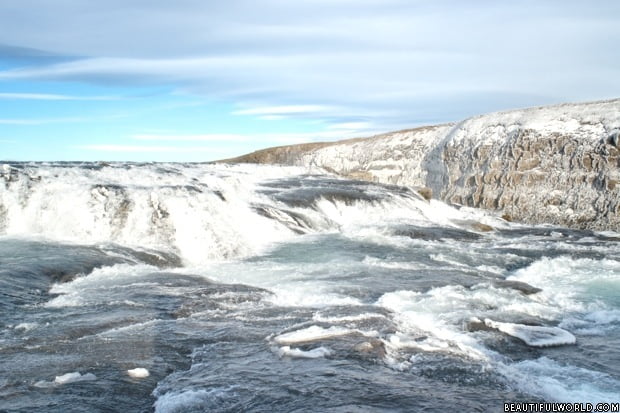 How to get to Gullfoss Waterfalls

Gullfoss Waterfall is situated approximately 70 miles (113km) from Reykjavik, the capital of Iceland and it takes 1h 40mins by car to reach the falls. From Reykjavik, follow the ring road east for 33mi (54km), before turning off for route 35. Continue on route 35 for the remainder of the journey, until you reach a large car park next to a visitor center. If that car park is full, there is also a smaller car park accessed via Route 334 (turning is approximately 700m away from the visitor center). 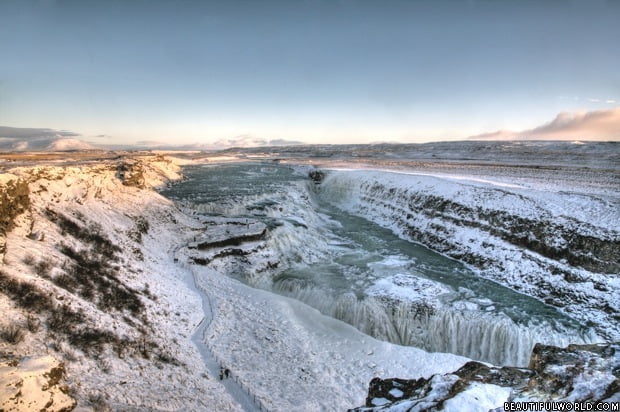 Nearly every Icelandic organized tour incorporates a visit to the falls as it is part of the ‘Golden Circle sightseeing route’. This route includes the Langjökull glacier, Geysir geothermal area and the Þingvellir National Park

The source of the river and falls is the Langjökull Glacier which is an interesting place to visit. You can ascend the glacier, skim across it on a snowmobile and investigate the ice tunnels at its base.

The nearby Haukadalur Valley is full of hot springs and geysers. The most famous geyser is the Strokkur which erupts every 5-10 minutes into a spout of broiling water 20m high. Geysir geyser is the biggest with a spout of 70m of water however it is currently inactive.

Þingvellir National Park is a UNESCO World Heritage site which is a stunningly beautiful rocky landscape punctured by clear springs and ponds. It is a must-visit location for many due to the fact that two different tectonic plates (North American and Eurasian tectonic plates) are exposed here and you can actually see how they are moving apart and new land is being created between them in the rift valley. Surprisingly as it may seem the park is actually home to one of the world’s best snorkeling and dive sites, the Silfra fissure. This is a submerged ravine that has visibility up to 100m however water temperatures hover around zero. Just south of the park is Iceland’s largest natural lake, Þingvallavatn. 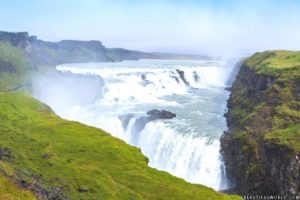