When to Visit Andorra

The Spring and Summer are excellent times to visit. The weather is great for walking, cycling and climbing and the rivers and waterfalls are in full flow and the scenery lush. The ski slopes open from the start of December through to April. Although it cold during the Winter, January to March is actually a very dry period as all the rain falls as snow. The wettest months are May, August and September. The chart below gives you an idea of the what the climate is like throughout the year. Note that there are large differences in altitude between towns, walking routes and ski slopes so temperatures on the same day can vary greatly within short distances.

When it isn’t snowing the country is basically one vast walking area. You can simply set off from a village, meander along a river or head up on one of the many mountain trails for a proper romp. There are hundreds of rivers and streams and few gorgeous lakes. You will find pretty much every route is quiet and well maintained. You won’t find a single famous walk, vista or waterfall – the place is special because everywhere is spectacular and beautiful.

The Andorran government have produced an activity app that contains all the official walking trails, refuges, bike paths, rock climbs and snowshoe trails. Its free and in lots of languages. Remember to download apps and offline maps before you arrive in Andorra – it’s not part of the EU so roaming charges are pretty eye-watering. Having said that there are lots of free public wifi points in the towns and tourist information offices so you should be able to get free wifi even if your accommodation does not provide it.

Grandvalira is the largest ski area in the Pyrenees; it stretches over 210km area which can be accessed from lots of different towns and villages; Encamp, Canillo, El Tarter, Soldeu, Grau Roig and Pas de la Casa. It is a good place for adaptive skiing. Grandvalira Piste Map.

Vallnord is the name given to two of Andorras ski resort; Pal Arinsal & Ordino Arcalís. The resorts share facilities and services and when combined offer nearly 100km of ski slopes. Nearby towns are Massana and Ordino both of which have ski lifts.
Piste maps: Pal Arinsal Piste Map, Ordino-Arcalis Piste Map.

There are nearly 40 natural thermal springs in Andorra. The water is mineral rich and surfaces at around 70C. Many of these springs have their own spa attached. The most famous is Caldea in the capital which is a vast building filled with different pools and treatment areas. It is the largest thermal spa in Europe.

The fantastic scenery, excellent roads and steep climbs make this area a mecca for road cyclists. The Tour De France and Spain’s equivalent (Vuelta a Espana) both have Andorran sections. There are miles of mountain tracks too perfect for mountain bikers.

Andorra is a very civalised place without being stuffy. There is a good range of accommodation, cafes, restaurants and bars and rpices are generally reasonable. The buildings are pretty; stone built with lots of dark wood and flower boxes. The captial city offers a huge range of shopping and some cultural events.

Border of France and Spain 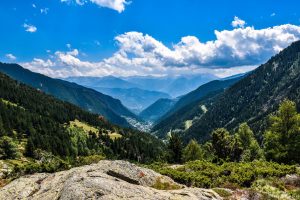