Rio de Janeiro is one of the most famous cities in the world. It conjures up images of beautiful people on long beaches, fantastical carnivals, and of course, the stunning bay overlooked by a huge statue of Jesus sited on the peak of Mount Corcovado.

The city of Rio de Janeiro has grown on the west side of the mountainous bay of Guanabara (Baía da Guanabara). The bay is 18 miles (29km) long and wide which means its western edge also has room for the city of Duque de Caxias and both the cities of Niterói and São Gonçalo lie on its Eastern edge.

At the mouth of the bay is another collection of towns which include the often sung about Ipanema and Copacabana.

The bay houses over 130 islands of varying sizes. Fundão and Governador are the largest and are connected to the mainland by multiple bridges. Rio-Niterói Bridge spans 13.29 kilometres across the mouth of the bay connecting the eastern and western sides.

Many people think the only mountain at Guanabara Bay is Corcovado which is famous because of the huge statue of Jesus which has been constructed on its peak. See below for more information on the mountain and statue. In fact, there are several Guanabara Bay mountains.

The South West of Rio nestles against the Tijuca National Park. This area was forested until the Europeans arrived who completely cleared the area for timber and farming during the 1700s. This resulted in severe water shortages to the city combined with flash floods. The city decided to replant the area and work began in 1862. Now it is densely forested land which became a national park in 2011. The area is very mountainous and Tijuca Massif. Among its impressive peaks are the Pedra da Gávea and Corcovado mountins.

The height of the Guanabara Bay mountains;

The entire bay is surrounded by hills which gives it such a dramatic appearance. There are far too many to list all of them but here are a few.

In addition to the mountains and hills that are situated directly on the coastline of the bay there are a large number of huge mountains that tower behind Guanabara Bays North and East edges mainly in the parks of Serra dos Órgãos National Park and Reserva Biológica do Tinguá. This adds to the amazing visual backdrop of the bay. Some of the tallest are;

If you want a complete picture you can view the peaks here and scroll your way around the bay seeing the huge number of hills and mountains and their height.

The incredible statue of Christ the Redeemer is 30 metres tall and 28 metres wide and it is entirely faced in sandstone panels. The foundation was started on the 4th of April 1922. This date was chosen to mark 100 years since Brazil had become independent from Portuguese rule.  The statue was completed by 1931.

The History of Guanabara Bay

The Portuguese explorers Gaspar de Lemos and Gonçalo Coelho were the first Europeans to visit the bay in 1502.  It was of course already well known to the local Tamoio and Tupiniquim tribes who lived on its shores.

It was left in peace until 1555 when the French arrived under the command of Nicolas Durand de Villegaignon. The French tried a few Island sies before building Fort Coligny on Serigipe Island. However, in 1563 the Portuguese came back and expelled the French. This time the Portuguese made the bay impenetrable by constructing a series of forts to house heavy artillery (Santa Cruz, São João, Lajes & Villegaignon). 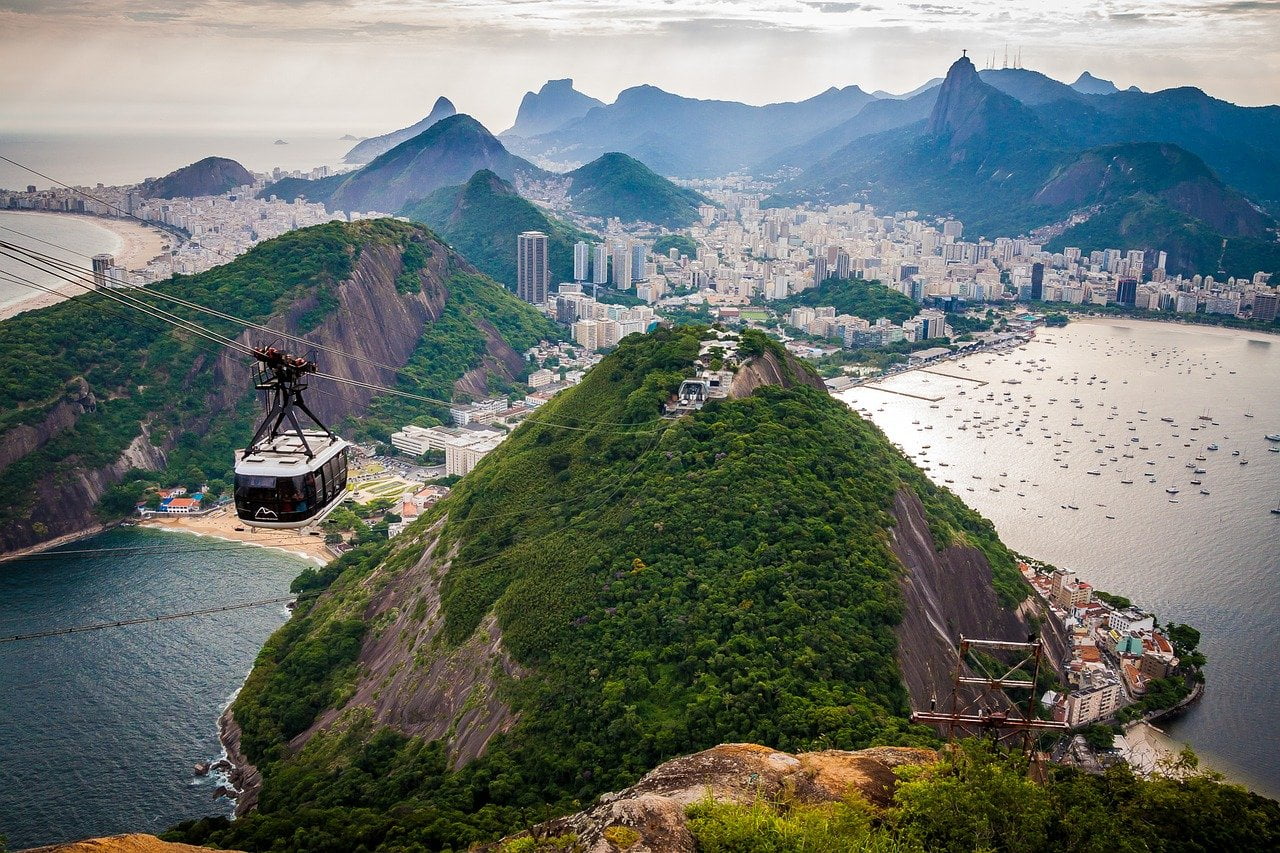 Today the city is the second-largest in Brazil a huge centre of industry, universities and research. Its vibrancy and stunning location make it a very popular destination for tourists.

The iconic Sugarloaf Mountain rises 396 m (1,299 ft) above the sea at the mouth of the bay.  You can take a cable car up to the peak from where there are fantastic views of the cities and bay.

There are two airports in Rio; Santos Dumont airport (also known as SDU) and Rio de Janeiro–Galeão International airport (GIG). GIG is very centrally located on the island ‘Ilha do Governador’ and is the largest serving national and a large number of international flights from the USA and Europe. SDU is only 2km from Rio and only serves national flights. 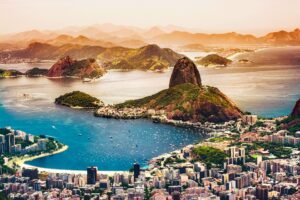