Angel Falls is the world’s highest uninterrupted waterfall. Located in Canaima National Park, the second largest national park in Venezuela, the waterfall tumbles from a cleft near the summit of table top mountain Auyán-tepu into what is known as Devil’s Canyon, 3212 feet (979m) below. The falls are a tributary of the Carrao River, itself part of Venezuela’s Orinoco River system. Considered among the world’s most dazzling natural wonders, Angel Falls are a truly unforgettable spectacle.

Before the mid-1950s, the falls were an unknown wonder. Even the indigenous Kamarakotos Pómon tribe who occupied the valley beside Auyán-tepu stayed away, believing that Angel Falls’ remote location harboured malign spirits.

In 1933, air-borne American gold prospector James Crawford (‘Jimmie’) Angel discovered Angel Falls accidentally, flying over the mountain in his Flamingo monoplane while in search of a valuable ore bed.

In 1937, Jimmie returned to the falls, his second wife, Marie, and acquaintances Gustavo Henry and Miguel Delgado also aboard his jittery, fixed-wing plane.
Although Jimmie landed his plane successfully on Auyán-tepu’s heart-shaped summit, the plane’s wheels became submerged in mud, and Jimmie’s aircraft remained marooned atop the mountain until 1970.

For 11 days, the group trekked across rough terrain, having to ration their limited food supplies, until they reached a small settlement at Kamarata. Word spread of Jimmie’s exploits and the falls’ were duly named after him. The tale piqued international interest in Angel Falls and many scientific investigations followed.

Canaima National Park was founded in 1962. In 1994, UNESCO named it a World Heritage Site.

Canaima National Park, with its breath-taking variety of tropical wildlife an awe-inspiring vistas, is the gateway to Angel Falls. The UNESCO World Heritage Site is only accessible by air; there are no overland routes into the park.

Rutaca and Avior airlines provide flights to and from the airstrip at Canaima camp. Passengers fly over dense swathes of deep jungle, much of which remains untouched by man, as well as ancient mountains, and many snaking rivers.

Before flying out, travelers must prove that they have been vaccinated against yellow fever. Visitors to the park generally fly from the colonial town of Ciudad Bolivar or Venezuela’s capital, Caracas. (It is also possible, though costly, to charter a private plane.)

You can use this flight search to look into your flights. Most international travelers will want to arrange flights to Caracas (CCS) from where you can connect to local service to Canaima camp (the Canaima airport code is CAJ).

Upon arriving at Canaima camp, an entry fee of approximately $4 is levied. Situated roughly 50 kilometres from Angel Falls, the Canaima camp is framed by several (lower altitude) waterfalls, which flow into a beautiful, mineral-stained lagoon edged by sandy beaches. Excursions to Angel Falls proceed from the camp, while tourist accommodation is situated a short Jeep ride away.

Having reached the park, a popular way to get to Angel Falls is by boat, though visitors can also fly from Canaima airstrip to Canaima lagoon. Motorised canoes travel upstream between May and January. Journey times vary, though, on average, it takes about five hours to reach the falls from camp. Winding waterways, edged with dense forest, teem with exotic wildlife; canoes zoom over boulders through rapidly flowing sections of river and those on-board are liable to get wet. From the lagoon, visitors then trek through lush, Venezuelan jungle, to various viewing points. If the flow of the falls is gentle enough, tourists are encouraged to swim in pools formed by the plummeting water.

Trips to Angel Falls can be booked in advance through various tour operators. Park lodges also run scheduled trips that can be booked upon your arrival at Canaima camp.

Things to do at Canaima National Park

Canaima National Park is approximately the size of Belgium. Duly, there are many things to see and do. The park is home to more than 550 species of bird, 500 species of orchid, ocelots, pumas and much more besides.

As well as opportunities to plunge into natural jacuzzis and bask on the shores of wide lagoons, visitors are encouraged to take part in hikes, boat trips and excursions into indigenous villages, all of which can be booked both in advance and through park lodges upon arrival. Tours last from an afternoon to a number of nights and different tours cater to different hiking abilities and interests.

Roraima, a table-top mountain near the park’s Guyana/Brazil border, is the tallest tepui in the park and extremely impressive. This slumbering giant measures 2,810 metres at its highest point and remains a favourite among those hungry for heart-stopping views. A trek to its summit takes five days. A guide is essential and can be hired from Canaima camp.

A famous “walkway” between the Sapo (“Frog”) and Sapito (“Little Frog”) Falls offers visitors to Canaima National Park the opportunity to walk behind cascading curtain of water, while Kevác Canyon and its dramatic waterfall, La Cueva, are located northwest of Kamarata – an old Pómon village. A miniature indigenous-run resort comprising a handful of thatched huts is also situated in this region. Here, you’ll discover a small shop, guest accommodation, and a tiny airstrip.

When to Visit Angel Falls

Angel Falls are best seen between the months of May and November. Between December and April, rainfall is much more infrequent and the falls all but evaporate, diminishing to a dribble.

Where to stay near Angel Falls

There is a range of accommodation available to park visitors, the majority of which is situated just a short Jeep ride from Canaima camp. Camping is forbidden in Canaima National Park. 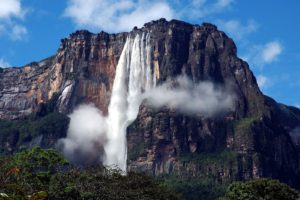