One of Aesop’s most famous fables is the story about the fox that simply could not get hold of a tasty bunch of grapes and no matter how hard he tried, they remained out of reach. It seemed that the more unattainable they were, the more desirable they became. It could be argued that many of today’s more adventurous tourists are rather like that fox with destinations that are far off the beaten track scoring highly in the holiday desirability ratings.

New Zealand is noted for its wide open spaces and spectacular scenery so those seeking wonderful views should have no need to look too far but amazingly one of the country’s most remote spots is also the number one tourist magnet. Milford Sound in the Fiordland National Park, set in the south-west corner of South Island, draws visitors not only from New Zealand but from all over the world and has even been judged to be the world’s top travel destination (Trip Advisor Awards 2008). It is a place of awe-inspiring grandeur even impressing such a seasoned traveller as Rudyard Kipling who described it as being the Eighth Wonder of the World.

The Naming of Milford Sound

Like many other places in New Zealand, this region has a name originating from the other side of the world. It was first discovered by Captain John Grono and he named it Milford Haven after his home town back in the south-west corner of Wales. It was later renamed Milford Sound presumably in recognition of its geographical features but it should be pointed out that it is technically a fiord rather than a sound. It was of course well known to the local Maori population who called it Piopiotahi meaning solitary piopio. According to legend, Maui was on a quest for immortality for mankind but died and a single piopio bird flew here in mourning. Unfortunately today’s visitors will not see even a single piopio as the species is now extinct. Following the Ngai Tahu Claims settlement Act of 1998 the name was officially changed to Milford Sound/Piopiotahi. The Cleddau River is also named after its Welsh counterpart, the original Welsh meaning being sword or swords.

According to legend, Maui was on a quest for immortality for mankind but died and a single piopio bird flew here in mourning. Unfortunately today’s visitors will not see even a single piopio as the species is now extinct. Following the Ngai Tahu Claims settlement Act of 1998 the name was officially changed to Milford Sound/Piopiotahi. The Cleddau River is also named after its Welsh counterpart, the original Welsh meaning being sword or swords. 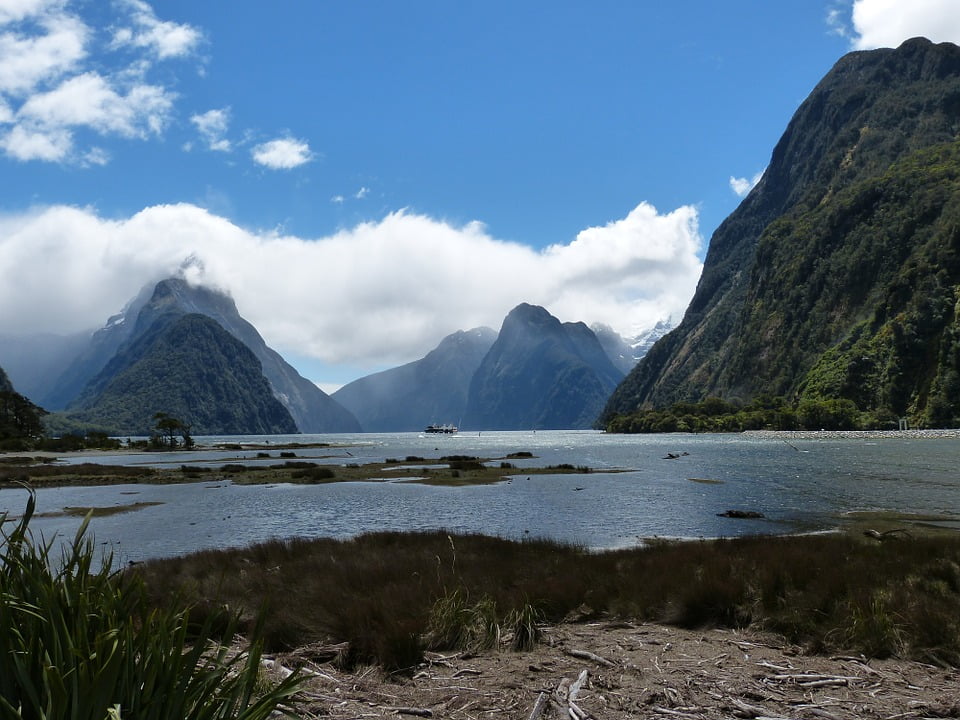 The History of Milford Sound

During an early exploration of the coastline by Captain Cook, this incredible place was completely overlooked, the most likely reason being that the rugged nature of shoreline posed a great deal of danger and the opening into the sound was thought not to lead to any significant features! It therefore lay undiscovered to the outside world until 1812 but, due to its extremely isolated location and inaccessibility, few people even knew of its existence and even fewer visited the area. It was not until the discovery of the Mackinnon Pass in 1888 that the first intrepid travellers arrived and the Pass was incorporated as part of an ancient pathway running through the region now known as the Milford Track. It is believed that this path was originally used by local Maori people collecting precious jade known as pounamu.

The Geography of Milford Sound

Milford Sound runs for 15 kilometres inland from its opening onto the Tasman Sea at Dale Head. Sheer rock faces rise up out of the water to heights of around 1,200 metres on either side. Snow-capped mountains with dense forests clinging to their steeply sloping sides give rise to some of the world’s most impressive waterfalls including Lady Bowen Falls and Stirling Falls the only two completely permanent waterfalls in Milford Sound but following heavy rain, which is a very common occurrence, literally hundreds of waterfalls appear sometimes dropping 1,000 metres into the waters below. Some of these never even reach ground level being swept away by the winds into clouds of spray. Sometimes updraughts can even cause the falling torrents to be blown upwards. This is one of the few places in the world where it is possible to see a waterfall flowing upwards! Two of the mountains have been named because of their animal-like shapes being called the Elephant and the Lion. Landslides, or more accurately, tree avalanches are fairly common and many parts of the heavily forested mountain sides show the scars of previous slips. 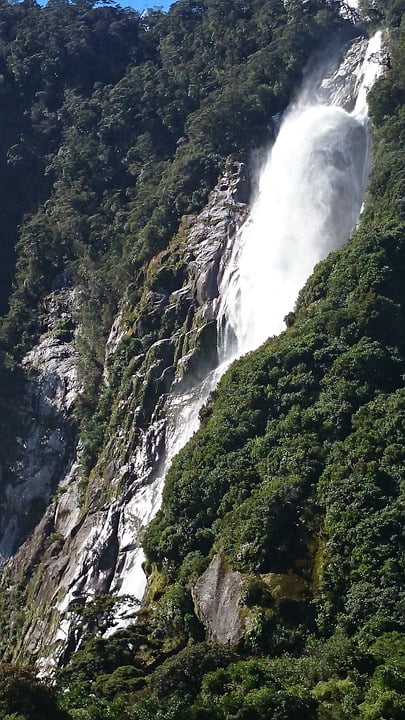 Flora and Fauna of Milford Sound

Most visitors to Milford Sound will wish to see both the beautiful scenery and the area’s wildlife. The waters within the sound and the nearby Tasman sea are rich in wildlife including seals, bottle-nose dolphins and various species of whales including the previously rare humpback and southern right whale. There are many species of birds including the Fiordland penguin. The forests are classified being temperate rain forests and there are many magnificent beech trees. These wonderful old woodlands have even made an appearance on the big screen as film director Peter Jackson chose to shoot part of the Lord of the Rings trilogy at Milford Sound which then became the backdrop of Fangorn Forest.

Milford Sound is still a remote spot but is now much more accessible than in the past. Many visitors start the journey from Queenstown (307 kilometres) or Invercargill (279 kilometres) passing through Te Anau (121 kilometres). There is now a well-engineered road which includes passing through the 1.2 kilometre Homer Tunnel. There are regular coach trips and many choose to to drive themselves but great care is advised especially in winter as landslides are not uncommon.

On arriving at Milford Sound, a cruise is the favourite way of really getting close to the magnificent natural attractions with cruise boats often passing within a few metres of the waterfalls. Seeing the fiord by kayak is also a popular option with the most sheltered waters being found at Harrison’s Cove which is also the home of the Discovery Centre and Underwater Observatory. Here it is possible to get an underwater view of the waters of Milford Sound to a depth of 10 metres. Those wishing to explore the waters more may be tempted to go diving in the 1,700 acre Marine Reserve where over 150 different species may be encountered including sharks, eels, stingrays, seals and dolphins. The majority of visitors only stay for one day necessitating an early start and late finish to the day’s adventures but some people opt for the option of a night-time cruise. So Milford Sound is a place to visit rather than a holiday resort. It has remained undeveloped with the few people living here being almost exclusively involved in the tourism industry. 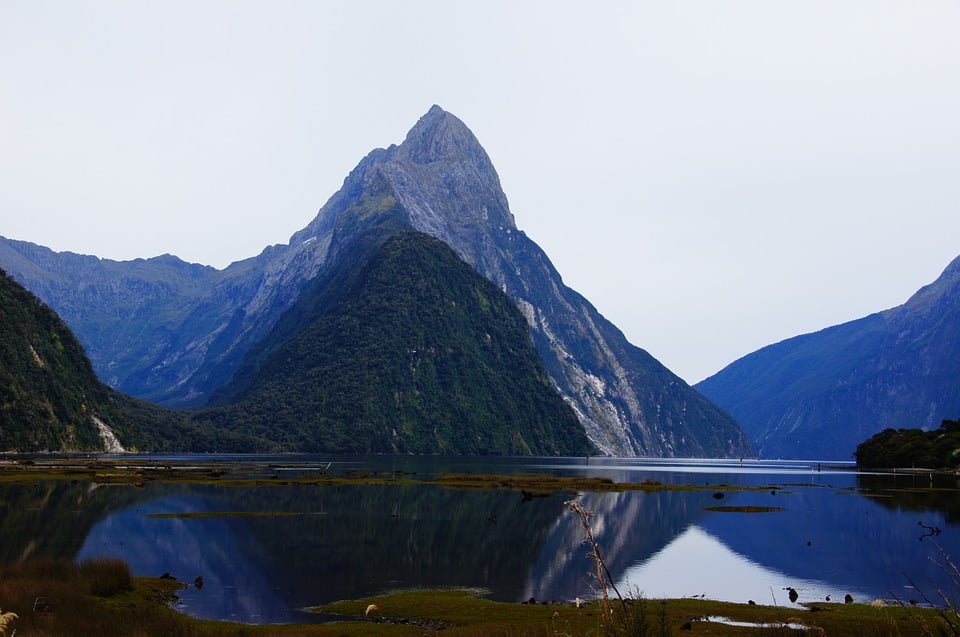 Although this area is a nature lovers’ paradise, unregulated camping is not allowed but some allocated tent pitches along with motor-home standings are available. Numbers are limited and pre-booking is normally necessary. One of the greatest ways to explore this area is by hiking, or tramping as it is usually called in New Zealand. The Milford Track was initially developed by Donald Sutherland in order to allow people to reach his newly discovered waterfall but has been steadily improved ever since and now allows visitors to see some of the regions most iconic landmarks including glacial valleys, Giant Gate Waterfall, Arthur River, Lake Ada, Bell Rock and of course Sutherland Falls. This is an ecologically sensitive site and the number of walkers is strictly limited currently being a maximum of 90 per day of which 50 are guided and 40 independent. This is a long trek covering a total distance of around 53 kilometres. It is completed in stages, the whole walk taking four days to complete. As no camping is allowed, there are some facilities for overnight stops. Those who have opted for a guided hike spend the nights in the relative luxury of lodges with such facilities as showers. The three lodges are called Clinton Hut, Mintaro Hut and Dumpling Hut. The independent walkers rely on stopping in fairly basic huts provided by the New Zealand Department of Conservation. These provide water, bunk dormitories and cooking facilities. The track is only regulated during the summer months and, for the less active, shorter walks are also available. 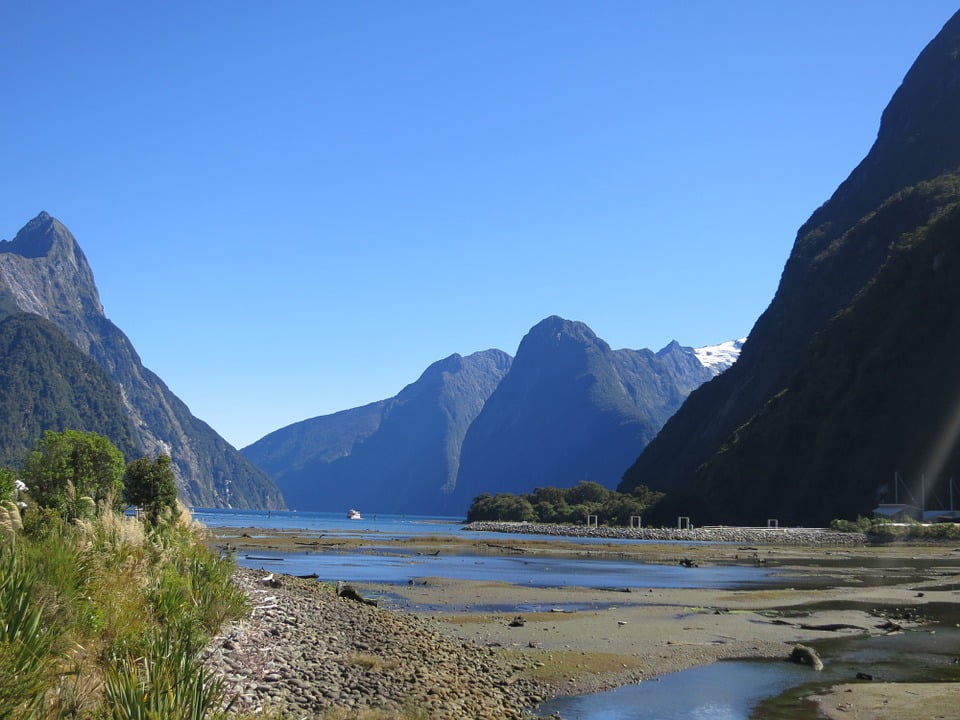 So, for those with a hunger for travel and an appetite for adventure, Milford Sound is a truly tasty tourist treat. It may be hard to reach but there are definitely no sour grapes here! 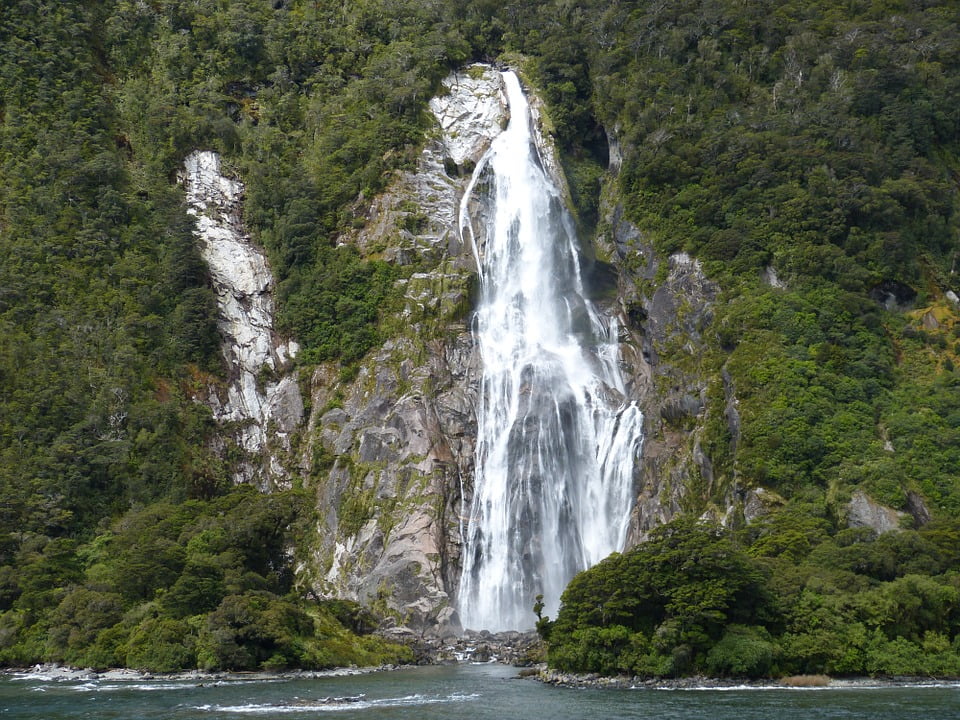