Niagara Falls is situated on the US and Canadian border, separating New York State from the province of Ontario. It consists of three distinct waterfalls; Horseshoe Falls, American Falls and Bridal Veil Falls, which collectively boast the highest water flow rate on the globe. Six million cubic feet of water flows over Niagara Falls every minute, offering what is undoubtedly one of the most spectacular views in North America.

Horseshoe Falls
Horseshoe Falls is situated on the Canadian side of the Niagara Falls. At almost 175 feet high and 2600 feet wide, it is both the highest and longest of the three waterfalls, carrying close to 90 percent of the total combined water volume.

The name ‘Horseshoe Falls’ is derived from it’s horseshoe-bend shape, which it obtained during the 1800’s and early 1900’s when Niagara Falls was a popular honeymoon destination. Prior to that time, it had resembled a more typical arch waterfall. Over the past several decades, erosion has created the waterfall we know and love today, shaped like a large inverted “V”.

American Falls
American Falls is about 188 feet high, although the pile of large rocks that has collected at its base accounts for nearly 40 percent of its height. In terms of width, it measures about 900 feet wide; around one-third the width of Horseshoe Falls. The American Falls form part of the Niagara Falls State Park; the oldest state park in the US. 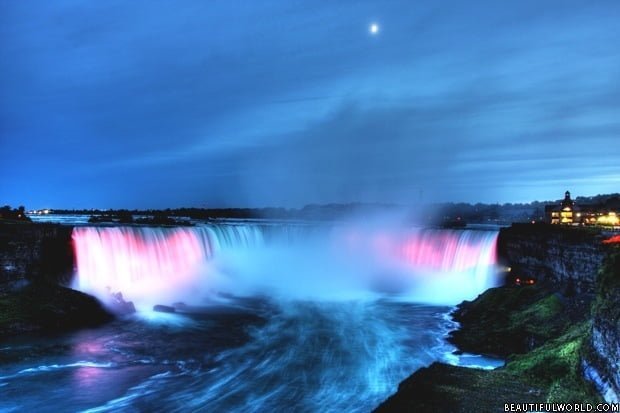 The Creation of Niagara Falls

Niagara Falls was created approximately 12,500 years ago, near the end of the last ice age. As the glaciers disappeared, the resulting melt water created both Lake Erie and Lake Ontario. The Niagara River was gouged out as a channel between the two. Although Lake Ontario is northeast of Lake Erie, the river flows north to empty Lake Erie into Lake Ontario. 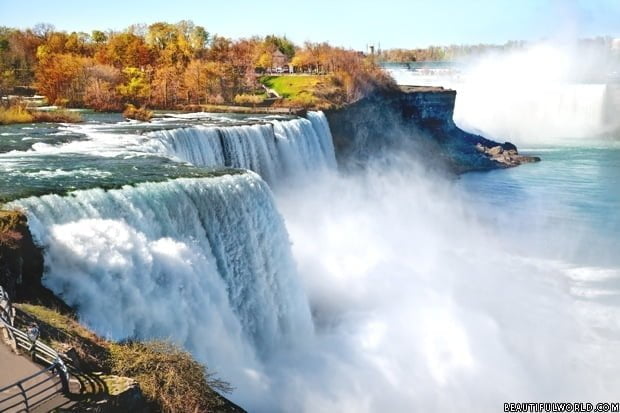 The Falls themselves were created due to the juxtaposition of three different rock types. Hard exterior rock overlying two softer strata of rock caused an uneven rate of erosion. Over time, the soft rock that was supporting the hard layer eroded, undercutting the hard exterior rock, which then broke into big chunks. Many years of repetition eventually carved out the Falls and led to the craggy outcropping of rocks that is so familiar to visitors today. 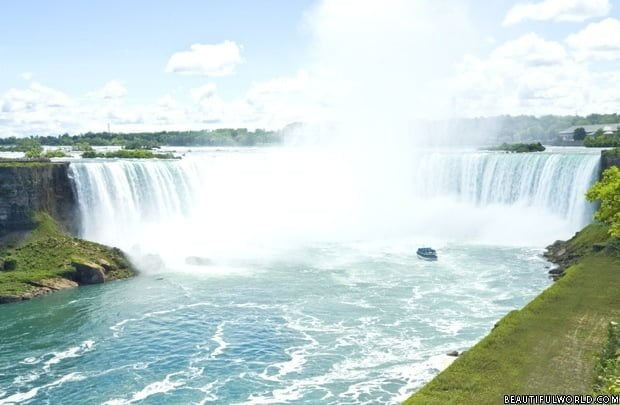 The rims of the Falls were originally located between Lewiston, New York and Queenston, Ontario; about seven miles north of its current position. Erosion has led to Niagara Falls being considered one of the fastest-moving waterfalls in the world.

In the late 1800s, erosion was measured at four feet per year, a rate that slowed to about two feet per year until the 1930’s. Engineers and conservationists have now taken steps to dramatically slow the level of erosion to less than one foot a year. Future projections forecast erosion of just one foot every ten years. 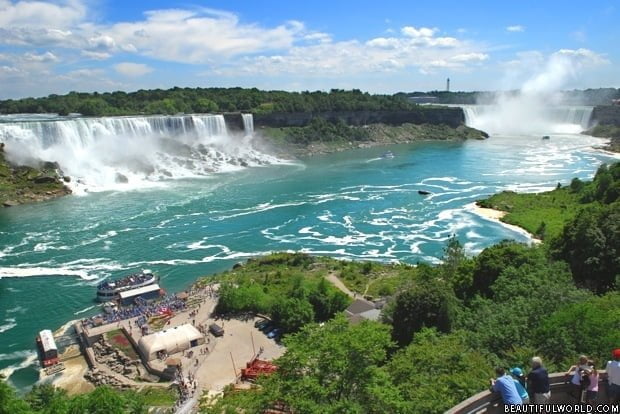 Flow
The water in the Niagara River is squeezed from the wide Falls into a narrow channel called the Great Gorge, creating the Whirlpool Rapids, which can be viewed from observation decks on the White Water Walk. The water makes a 90-degree turn as it empties into the mile-long Gorge. Traveling at speeds of up to 30 miles per hour, similar to Class VI whitewater rapids, the water riles through the Gorge before opening into the more serene, lower Niagara River.

Color
The water flowing over Niagara Falls is famous for its beautiful blue-green color. Naturally occurring organisms such as algae work together with sunlight on the surface of the water to contribute to the unusual hue. Pulverized rock, known as “rock flour”, also adds to the waters tint.

At the bottom of the Falls, the water can sometimes looks brown, which is often mistakenly considered to be polluted. The brown color of the water is a result of clay that has eroded from the bottom of Lake Erie being swept over the Falls, and then deposited around the rocks at their bases.

Mist
The water thundering over Niagara Falls creates a perpetual mist that is almost as famous as the Falls themselves. In fact, it’s not unusual to see rainbows or solar bows. In the 1800s, lunar rainbows were also reported, although they weren’t as spectacular as the daytime rainbows. Today, rainbows are most frequently seen in the late afternoons on sunny days.

The ever-present mist leads to some incredible sights during the winter months. Mist freezes on every possible surface, including trees, rocks and man-made structures, leading to breathtaking scenes that are just as compelling as the sheer power of the water. 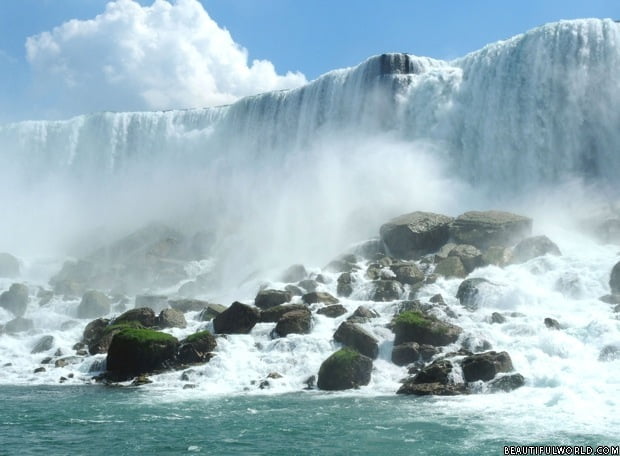 Are the Niagara Falls Frozen During Winter?

The Niagara River froze just above the falls in 1848, the only time in recorded history, stopping the water that flows over the Falls themselves for a total of 30 hours. During this period, a number of brave adventurers walked across the river on the ice just above the Falls.

There have been other instances where ice jams upstream on the Niagara River have slowed the water going over the Falls to a fraction of its usual flow rate. These ice jams led to the creation of ice bridges, which enticed visitors to walk across the river from side to side. However, ice bridges sometimes formed very close to the lip of the Falls, and often broke up suddenly and spectacularly. Following the death of a few visitors on ice bridges that broke apart, the practice was prohibited. From the 1960’s onwards, ice booms have been placed in the Niagara River each winter to prevent ice jams moving from Lake Erie to the Falls. 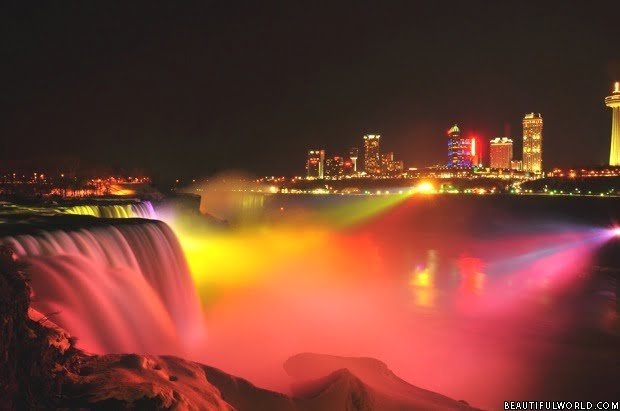 The average temperatures and rainfall in Niagara Falls for various months throughout the year are as follows: 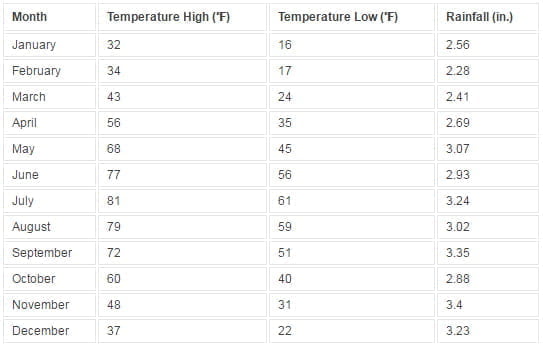 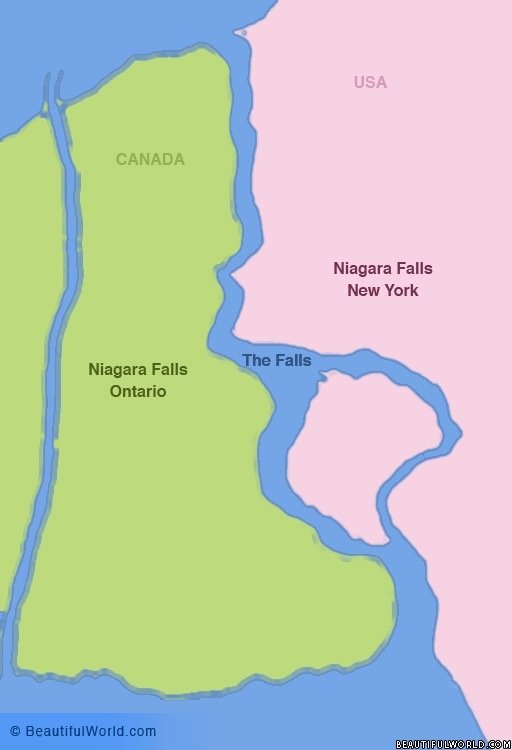 When is the best time to visit Niagara Falls?

The best time to visit Niagara Falls is generally between mid May and mid September. These months are the most likely to provide warm weather, blue skies and beautiful rainbows. However, the weather is likely to be hot and humid, with afternoon thunderstorms common.

Visiting Niagara Falls in October provides the best views of the fall foliage. For an altogether different experience, the snow and ice in winter can make the Falls extremely quaint and picturesque. However, the winter weather can be very cold and unpredictable, ranging from highs of 16 degrees Celsius to lows of -23 degrees Celsius. Regardless of what time of year you visit the Falls, the views and memories will be unforgettable. 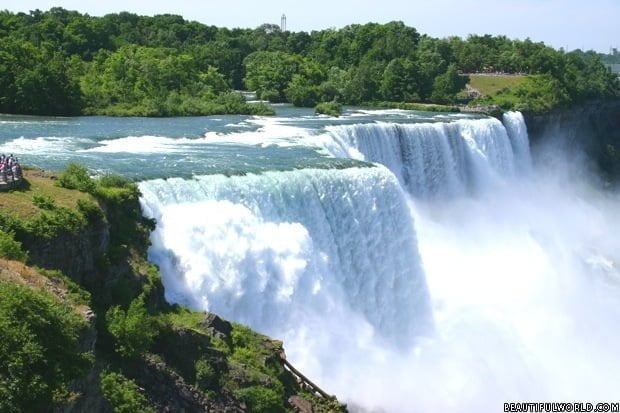 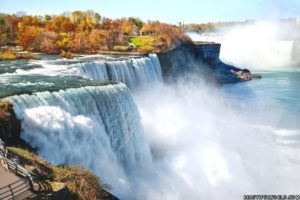