Islands are fascinating places each having its own charms and character. When viewed from afar, an island is a place of mystery, a land waiting to be explored. For those who live on an island, there is a strong sense of belonging and feeling of security with their homeland being protected by a maritime moat. It is therefore hardly surprising that islands feature highly on most travellers’ lists of favourite destinations and for many, this usually involves a long trip to a tropical paradise. Other, closer to home, islands should certainly not be overlooked.

The Isle of Wight is the UK’s most famous holiday island and its popularity continues to grow as each generation finds new and exciting ways to enjoy visits to this charming island. The island has a rich and varied history and has been inhabited since ancient times but its popularity as a tourist resort really developed during the Victorian era when increasing wealth and the availability of a good transport network led to a boom in seaside holidays and day-trips. When Queen Victoria and Prince Albert chose the island as their holiday retreat, this really put the island on the map as one of the most fashionable places to visit. The Queen was of course notoriously difficult to amuse and so it seems that any resort that pleased her must be very special indeed. The once quiet island soon became a major holiday resort, a tradition that continues to this day.

In many ways the island epitomises the traditional British seaside holiday. It is considered to be so typically English that it has even been described as being “England in Miniature” and certainly much of the countryside bears a striking similarity to some of England’s “Green and Pleasant Lands”.

Naturally, the coastline is a major attraction and the island has no shortage of award-winning beaches. The view from Osborne House was famously described by its royal owners as being reminiscent of the Bay of Naples but here the landscape is much different and there are certainly no smouldering volcanoes to be found.

The Isle of Wight is composed completely from sedimentary rocks including sandstones and chalk. It is a rich hunting ground for fossil collectors and the remains of dinosaurs have been found on the island. For dinosaur fans, there are a couple of excellent displays and Dinosaur Isle at Sandown has life-sized models of some of the dinosaurs that once inhabited this land including the Polacanthus, Hypsilophodon, Iguanodon, Eotyrannus and Neovenator. “Restricted Area 5” at Blackgang Chine goes even further with full-sized animated dinosaurs including T.Rex.

There are so many things to see that many visits would be needed to see everything but many visitors to the island feel that the famous chalk “Needles” at the west end of the island are not to be missed and the famous coloured sands of Alum Bay also provide a lasting memory of a remarkable place.

Getting to the Isle of Wight

One of the great things about the Isle of Wight is that it is easily accessible. It is only around a two hour trip from London and there are great ferry services designed to match the nearby mainland transport services. The favourite way of reaching the island is by car ferry and there are two operators these being “Red Funnel” and “Wightlink”. The trip from Southampton to East Cowes takes around an hour, Porstmouth to Fishbourne 45 minutes and Lymington to Yarmouth 30 minutes. For foot passengers there are speedier alternatives and Red Funnel’s “Red Jet” boat makes the trip from Southampton Docks to West Cowes in 25 minutes. The Wightlink “Fast Cat” crosses from Portsmouth to Ryde in 22 minutes. The island is also served by the world’s only commercial hovercraft service and the Hovertravel vessels can make the trip (officially known as a “flight”) between Southsea, Portsmouth and Ryde Esplanade in less than 10 minutes.

Isle of Wight Hotels and Accommodation

There are few places more visitor-friendly than the Isle of Wight. Hotels of all types are available to suit all budgets and a friendly welcome is guaranteed. In addition to hotels, there are many B&B establishments, holiday parks, camp-sites and of course not forgetting cottages to rent as famously mentioned in the Beatles’ song: “When I’m 64”.

The Isle of Wight Festival

There are so many things to do on an isle of Wight holiday but for many music lovers, the name Isle of Wight simply means that it is festival time. The island famously hosted the UK’s first outdoor music festivals commencing in 1968. The most famous was the 1970 festival which attracted a huge audience of approximately 600,000 people to see some of the world’s greatest performers including Hendrix on his final British appearance. The US may have had Woodstock but 1970 on the Isle of Wight was surely the UK’s summer of love! The festival disappeared for many years but was resurrected in 2002 and in its present form has gone on to become a major annual event. It takes place in June and is generally regarded as being the start of the UK festival season. It is held on the outskirts of Newport.

The Isle of Wight Festival may be the Island’s most famous annual event but it is by no means the only one. The Mardi Gras Carnival is held later in June and in July Ryde plays host to the Shipwreck Isle Pirate Festival which promises plenty of fun and dressing up so it’s wooden legs and eye-patches at the ready.

The island is famous for sailing and July sees the Round Island Race for sailors and crafts of all abilities. Lovers of classic yachts will enjoy the Panerai British Classic Week also in July. The Cowes-Torquay-Cowes Race is a major power-boat event held in late August.

Jack up the 80s is a retro pop festival held in August and the same month welcomes scooter enthusiasts to the Isle of Wight Scooter Rally held appropriately in Ryde.

For those simply looking for a relaxing holiday this surely one of the greatest places in the UK. Around half of the island is designated as an area of outstanding natural beauty. The more energetic may wish to explore on foot, cycle or even on horseback. There are over 500 miles of footpaths and 165 miles of bridleways and these provide the opportunity of really appreciating the beautiful scenery. It is regarded as one of the top cycling destinations and other sports are also well catered for including water-sports, golf and fishing but for many visitors, the beaches will be the main attraction.

The weather on the island is similar to that of the nearby south coast but tends to be slightly warmer due to the marine influence. Winters tend to be mild and there is some suggestion that the area is generally becoming slightly warmer. Two vineyards can be found on the island and garlic is now a successful crop.

Why is it Called The Isle of Wight?

Visitors could be forgiven for assuming that the name “Wight” refers to the appearance of some of the island’s white chalk cliffs but this is almost certainly not the case. The name goes back for thousands of years and there is some uncertainty about its origin.

The word “wight” is certainly an old-English word which was usually used as a name for a living creature, especially one being human in nature. It was often used as a name for strange beings such as witches, ghosts, sprites, fairies or even the walking dead so an island of wights could be a spooky place indeed.

Possibly a more probable origin is that wight could be a spelling variation of weight. The old meaning of the word would be an uprising of rock and could be a description of this land-mass. It should be remembered that rocks and weights have certain similarities and, in the UK, weight is still often expressed using the units of stones. For most people however, Isle of Wight rock is something to be eaten at the seaside but whether the rock is of a confectionery or of musical significance, few people would disagree that this island certainly merits the title of “The Island of Rock!”

Some of the images we have used have been provided by visitisleofwight.co.uk. You can find out lots more information about the island, places to stay and up to date information on events by visiting their website.

The Isle of Wight Facts 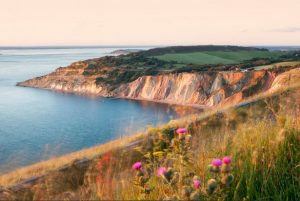