For the true adventurers, nothing compares to a visit to the Antarctic and there is one particular island with many secrets and a blood-stained past filled with the horrors of the whaling industry. Deception Island forms part of the South Shetland Islands archipelago and, at a latitude of 62 degrees 57 minutes south, these are icy waters and visiting ships need to be icebreakers capable of traversing these hazardous seas.

The island presents a dark mass of rock, clearly volcanic in origin rising up out of the sea, a far from inviting place, but a narrow channel at the south east of the island, known as Neptune’s Bellows, provides a safe route through the rocky shoreline leading into one of the most incredible natural harbours on Earth. It soon becomes apparent that, far from simply being a lump of volcanic rock sticking out of the ocean, this is actually the flooded centre of a volcano. The deceit continues as, despite its normally benign appearance, this is an active volcano!

Visitors normally need to disembark using inflatables (Zodiacs) to reach the inner shores of the island and there they are faced with grim reminders of this place’s grizzly past. Whale bones partly buried in the black volcanic sands and the rusting remains of huge boilers and oil storage tanks give some indication of the immense scale of the whaling operations that once took place here.

About 10,000 years ago, a huge volcanic eruption formed the island and the centre of the volcano collapsed forming the central depression, or caldera, which became flooded forming a horseshoe shaped island. In this inhospitable part of the world the island only came to prominence when it was recognised as providing a safe harbourage along with fresh water. Although over half of the island is covered by glaciers other parts remain largely ice free due to the heat from the underlying volcanic activity. The seal fur industry soon realised the potential profitability of using this location and mass slaughter of seals took place between 1819 and 1825 by which time the seals were bordering on extinction and the island was abandoned. It was later surveyed by the Royal Navy and claimed as British territory but eruptions in 1842 caused it to be once again abandoned. It was not until the early years of the 20th century that Norwegian whalers took up residence building a processing plant along the island’s inner shoreline. This enabled much more efficient collection of oil than had previously been possible in the open sea. In 1908 the British Government reasserted its claim to the territory declaring it to come under the jurisdiction of the Falkland Isles. Some building took place including a cemetery along with a system of taxes and quotas for the whalers. Further mechanisation of whale slaughter saw the advent of huge factory ships where the dead whales could by winched up ramps for processing meaning that the whalers were then able to continue their bloody trade without the need for any land-base free from any taxes or quota restrictions. Whaling operations on the island ended in 1931.

The island is of course merely the tip of a large submarine volcano and is one of only two active volcanoes in Antarctica. Over half of the terrain (57%) is covered with glacial ice but geothermal activity results in some parts remaining relatively ice free. Underwater volcanoes are common throughout the world and the nature of their eruptions is usually fairly predictable with lots of steam being produced from the boiling seas as the magma cools but, due to the huge amounts of ice present in this area, the effects of any eruption here are completely unpredictable. The island itself is roughly circular with a diameter of approximately 12 kilometres. Inside the surrounding ring of mountains, Port Foster is the large inland bay measuring 9 x 6 kilometres with various coves and beaches around its periphery. On entering via Neptune’s Bellows, Whalers Bay is to be found to the right on the eastern shore and directly to the west is Kroner lake which is the only geothermal lagoon in the Antarctic. The highest peak, Mount Pond, is on the eastern side reaching a height of 539 metres.

Any disputes regarding the sovereignty of the island are now mainly academic as it is now included in the Antarctic Treaty Area and has been named as an Antarctic Specially Managed Area mainly due to some unique forms of vegetation, predominantly mosses and lichens. Both Argentina and Spain have permanent research bases on the island. Visitors are often attracted by the large resident population of chinstrap penguins which roost on the west coast along with other sea birds such as skuas and petrels. For many, the historical remnants of the whaling industry hold a grim fascination but part of the excitement is to actually be standing on an active volcano. The island certainly has its share of hot-spots with many micro-climates. In some areas water can be found at temperatures as high as 70 degrees Celsius with air temperatures of up to 40 degrees but in general this is a very cold place officially classified as having a Polar Maritime climate with temperatures ranging from 11 to minus 28 degrees Celsius. Some visitors may suggest that some warmth may be found by burying one’s feet in the black sandy beaches but this is probably doubtful. Even braver visitors may indulge in an dip in the Antarctic waters or preferably a geothermally heated pool but this is certainly not a prime location to engage in water sports.
Deception Island is a chilling place in many ways. One cannot help but try to envisage those long-past days with whalers slicing blubber from the carcases and the seas running red with blood. There have been many recent eruptions, the last major event being in 1970 but this continues to be a restless caldera with a significant volcanic risk. 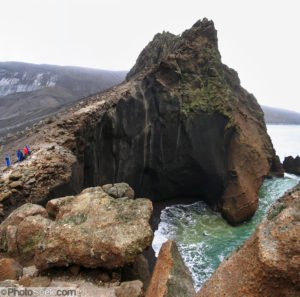 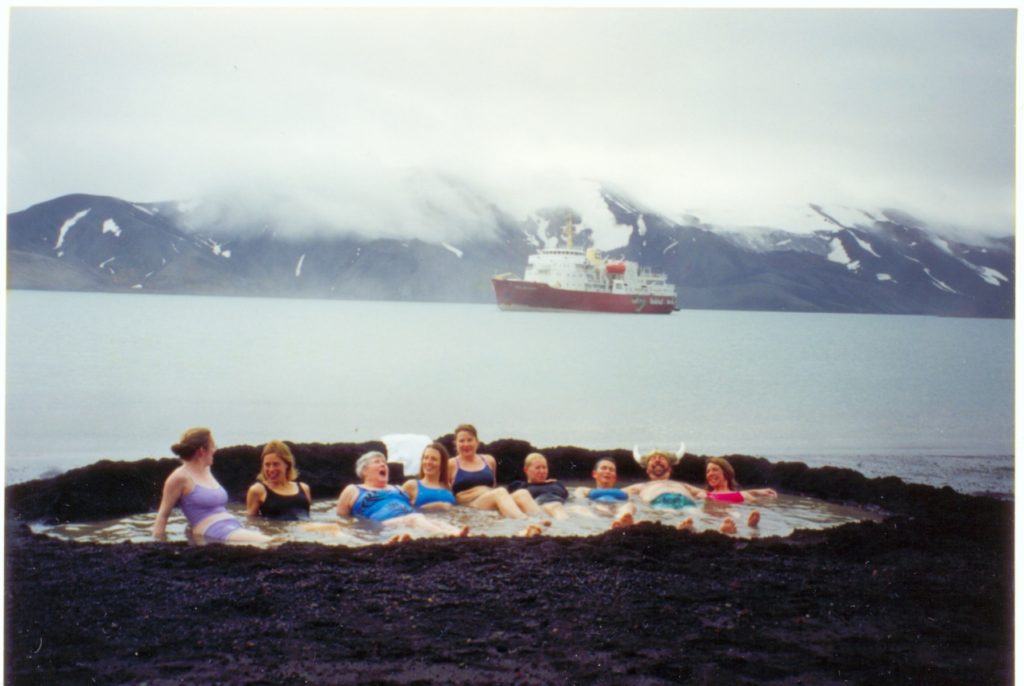 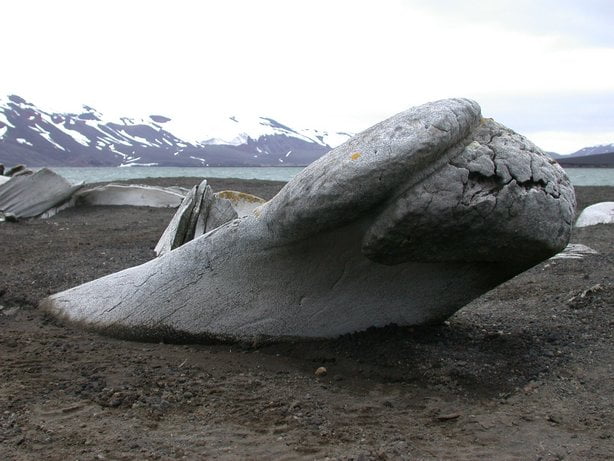 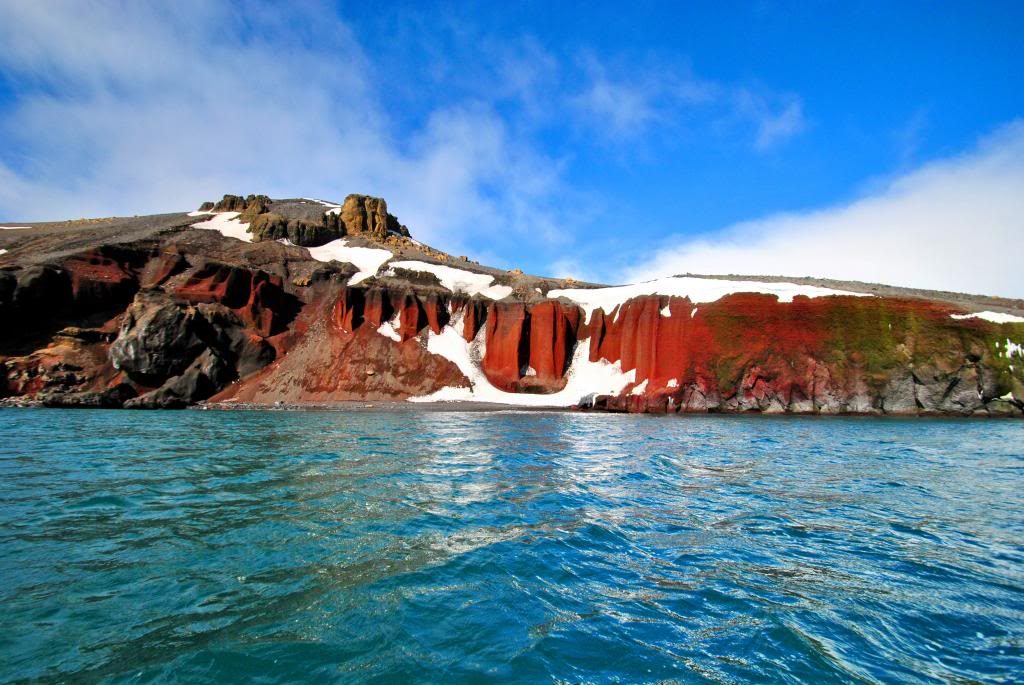 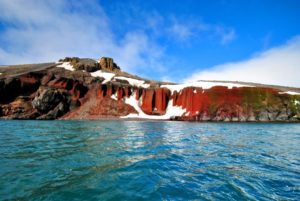