Tibet is a remote and forbidding land sometimes referred to as “the roof of the world” due to its extreme altitude high in the Himalayas. Despite its inaccessibility and history of tumultuous political unrest, the area has, for thousands of years, attracted visitors who come not only to enjoy the incredible mountain scenery but also to experience the spiritual enlightenment of visiting some of the most revered holy sites on earth. Nowhere is this more apparent than at the huge snow-covered massif called Mount Kailash. This is located in south-west Tibet and has great religious significance in Hinduism, Buddhism, Jainism and Bon (a Tibetan religion). The name Kailash is derived from the Sansrit word “kailasa” meaning “crystal” but the traditional Tibetan name for this mountain is “Gangs Rinpoche” meaning “precious snow mountain”.

The unique appearance of this mountain has ensured that it has always been steeped in mystery. Its four sheer faces follow the points of the compass in a way that looks as though it were put in place by some divine hand. In legend, the four faces of the peak are named after the peacock, the elephant, the lion and the horse and the faces are said to be of gold, crystal, ruby and lapis lazuli. From the mouth of each face flows a great river, the Indus, the Sutlej, the Karnali and the Brahmaputra. The mountaintop is said to be the home of several gods with the Hindus regarding it as the seat of Shiva who, along with his wife Parvati reside on the mountain in a state of perpetual meditation. Followers of Bon, the Tibetan religion that preceded Buddhism, believe that this was where god came down to earth and that the mountain is the home of the sky goddess Sipaimen. Buddhists believe that Buddha Demchok and/or Buddha Demchog are in residence and Jains assert that it was on this mountaintop that Rishaba attained liberation.

Has Mount Kailash Ever Been Climbed?

All religions are agreed that setting foot on the mountain is considered a sin. It is therefore widely believed that the mountain has never been climbed. In the past, mountaineering expeditions have been granted government permission to climb Kailash but this resulted in so much local opposition that the climbers decided not to launch any such attempt to conquer this peak. The mountain itself has a striking architectural quality looking almost like a gigantic pyramid or other monument. It is formed from striated metamorphosed sedimentary rocks sitting on a base of igneous granite.

The history of pilgrimages to Mount Kailash goes back for thousands of years with people coming not only from within Tibet but from far afield. For some time, access was severely restricted for foreigners due to the border disputes but it is now more or less accepted that Tibet is an autonomous region of China and the Chinese authorities are now looking to help and develop the area. It is now fairly straightforward to visit Mount Kailish but foreigners still need to be in possession of a valid “Alien’s Travel Permit”.

Thousands of people make the annual pilgrimage but it is still far from easy to reach being far from the beaten track. A good road now leads from Lhasa but there are no regular bus services meaning that the best way to make the journey is by car. Hire cars are available and 4x4s are highly recommended. In some cases, drivers may also be included in the hire. The best time of year to visit is dictated largely by the weather and in winter the whole area becomes an icy wasteland making any outside activity virtually impossible. May to October sees most visitors but 15th of April has special significance to Tibetans being the festival of Saga Dawa and is a very special time at Mount Kailash.

Many tours of Tibet now include this famous site on their itinerary but any visit to Mount Kailash is almost certainly going to involve much more than simple sightseeing. Following a trail completely around the mountain is said to bring good luck and the main trail, or “kora”, is a substantial 52 km in length. Some Tibetans complete this trek in a single day which is a considerable achievement, especially when taking into account the altitude and nature of the terrain. Most pilgrims prefer to split the journey into segments with a three-day trek being the most popular. The starting point is invariably the small village of Darchen which is at an altitude of 4,675m. The highest point reached is the Drolma La Pass at 5,630m. Some visitors make a detour from the main trail to visit the Kangkyam glacier on the north face of the mountain.

Along the route, simple food and refreshments may be available. Overnight accommodation is often offered in local guesthouses and at the various, mainly ruined, monasteries along the way but for many, camping is the preferred choice with most visitors bringing along their own tents and camping equipment. It should be remembered that, even during summer, sub-zero night-time temperatures are to be expected and so clothing and camping equipment should be chosen with this in mind.

Some people may experience difficulties due to the altitude and great care should be taken not to overexert oneself. Any symptoms of altitude sickness should be taken very seriously and the affected person removed to a lower altitude without delay. Carrying a heavy payload may prove difficult but the services of hired porters is a welcome option. Even pack animals are on offer but horses are generally regarded as being much easier to handle than the native yaks. As an alternative to completing the full outer kora, a shorter inner kora is also available. This leads from Darchen and heads towards Yinjietuo Mountain, which is just to the south of Kailash. This track goes around Yinjieto Mountain, passing close to Kailash’s south face before heading back to Darchen.

There are conventions regarding the direction of walking around Mount Kailash with Hindus and Buddhists following a clockwise route with followers of Jain and Bon proceeding anti-clockwise. Most other visitors travel clockwise. Visiting Mount Kailash is certainly an unforgettable experience and the completion of a kora a tremendous and uplifting experience. Most of us can only regard with awe the dedication of some of the pilgrims knows as “Prostrators” who throw themselves to the ground, crawl forward and then repeat the process. For them, completion of the kora can take three or four weeks which is an amazing feat of endurance and faith. 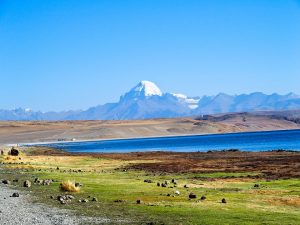