Despite its name and northern latitude, Iceland is most certainly not a frozen wasteland. Most visitors, however, expect to experience the raw beauty of this rocky volcanic land. Summer visitors may be surprised by the pleasant weather but ice is always present in central areas and on the peaks of Iceland’s mountains. One such peak is the glacier-covered volcano Eyjafjallajokull located in the Southern Region on Iceland’s southern coast. This volcano is famous for its 2010 eruption which effectively closed down air travel in northern Europe. It is also famous as being one of the most difficult names to pronounce! Waters from Eyjafjallajokull’s melting ice flow into the Seljalands River and into the sea but, before making the final leg of this journey, the waters pass over a high cliff forming the spectacular Seljalandsfoss Waterfall (foss means waterfall in Icelandic).

Seljalandsfoss Waterfall is certainly not difficult to find and is clearly marked on any map. Anyone travelling along the southern portion of Iceland’s ring road (Route 1) can hardly fail to notice this mighly waterfall.

How To Get To Seljalandsfoss Waterfall

Reykjavik is the base for most visitors to Iceland and this waterfall is around 120 km (2 hours drive) from here. Route 1 is followed and from this road the waterfall can be seen from a considerable distance and turning left towards the falls, after a short distance, the parking area can be seen. Seljalandsfoss Waterfall is also a stopping off point for almost every tour in this area. The Golden Circuit is perhaps the most popular tour.

This is Iceland’s most famous waterfall and simply watching it is an unforgettable experience but, for most people the chance of walking behind the waterfall is an opportunity not to be missed. The pathway and rocks are wet and slippery so great care must be taken and suitable clothing and footwear should be selected.

No matter how good the weather may be, walking behind a waterfall involves getting wet so waterproof clothing is highly recommended. This may be a perfect photo-opportunity but again some pre-planning can improve the chances of success. Expensive cameras should be suitably protected and exposure settings need to be chosen carefully as photos taken from within a cave against a backdrop of a sunlit waterfall are challenging to say the least. The use of flash may provide the simplest solution. The area of meadowland at the foot of the falls is a calm and relaxing spot and ideal for a picnic if time permits.

Although summer is the most popular time to visit the falls, winter brings its own charms. The sight of the icy waters cascading down to snow covered lands below is made even more magical as the falls are illuminated during winter. The path leading behind the falls is generally closed during winter for safety reasons as there is a risk of falling ice or even rockfalls. Wintertime also provides a chance of seeing the Northern Lights so, although the chances may be slim, it could just be possible to view Seljalandsfoss Waterfall set against the Aurora. 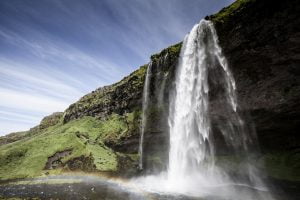