The 15th century Inca citadel of Machu Picchu is much more than just an interesting place to visit. These mountaintop ruins are not only the number one visitor attraction in Peru but the top visited site in the whole of the South American continent. The site was given UNESCO World Heritage Site listing in 1983 due to its outstanding natural and archaeological features and in 2007 it was voted one of the New Seven Wonders of the World in a worldwide internet poll.

Although much of Machu Picchu’s past remains shrouded in mystery, it is now generally considered that this incredible township was built around 1450 most probably as a place of royal retreat. Its location along the ridge of a mountain top must surely rank as one of the most challenging building sites but the location was probably chosen primarily because of its inaccessibility offering safety and security to those within. All points of access to Machu Picchu could be easily defended making it virtually unassailable.

Two high-level routes existed in the form of a rope bridge spanning across the Urabamba River below and a timber tree-trunk bridge across a 570 metre deep chasm. Some of the buildings are located with special regard to astronomical alignments and this, and perhaps some religious significance, may also have influenced this choice of site.

It was thought that it was built for the Inca leader Pachacutec (1438 – 1472) and was constructed in the classical Inca style with much use of polished dry stonework. The quality of these buildings represents the pinnacle of Inca craftsmanship and Machu Picchu has the finest and best preserved Inca architecture to be found. Keen observers may notice that many of the walls are deliberately not vertical and many windows are trapezoidal rather than rectangular. Some junctions between different building elements are built as curves rather than simple angles and all of these techniques add strength and rigidity to structures built without mortar. The building work made use of locally quarried stone, often in massive blocks and we can only wonder about the logistical problems of transporting such loads and carrying out such extensive building works in such an inhospitable location. The Inca people, it should be remembered had no written language, no machinery and did not even use the wheel. Their metalworking skills were mainly employed for producing decorative items of gold and bronze but they had no knowledge of iron. 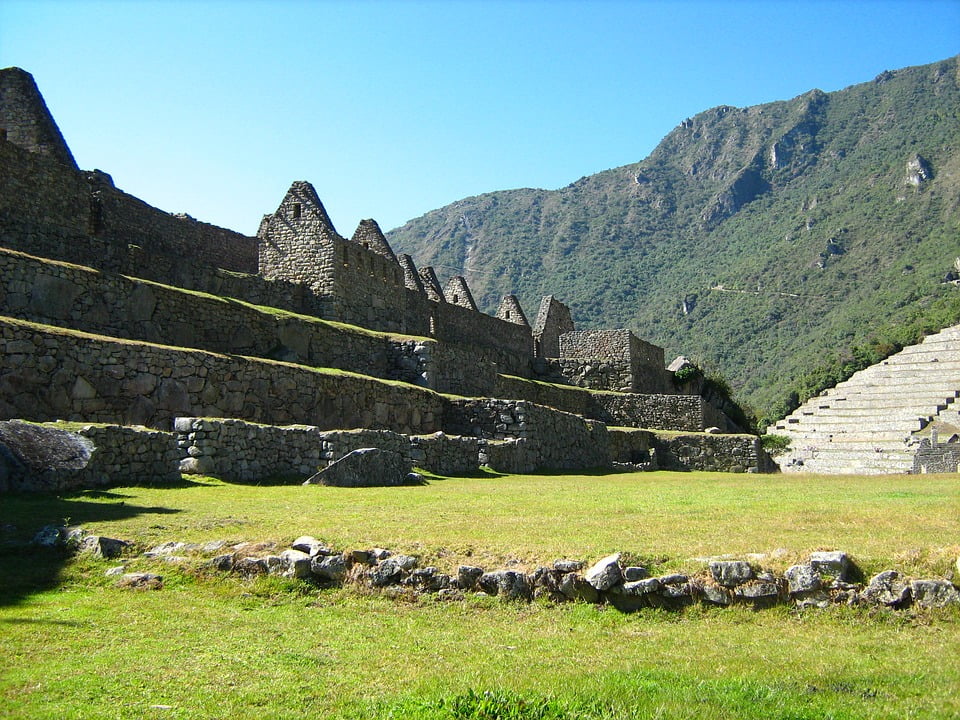 Machu Picchu was probably the home of around one thousand residents and would have been largely self-sufficient although some trade with other areas certainly occurred. It appears to have been deserted at around the time that the Spanish conquest became absolute in 1572. It is almost certain however that the conquistadors never discovered this lofty retreat as there is no evidence of any of the damage seen in other sites.

In this heavily forested area, the whole site virtually disappeared as vegetation reclaimed the land. Although it was known to local people and it appeared on some maps from 1874, Machu Picchu was really only brought to the attention of the world when the American historian Hiram Bingham was led to the site by a local farmer when on an expedition to try to find Vilcabamba, the Lost City of the Incas. Bingham erroneously believed that he had found Vilcabamba, a belief he held for many years.

The Restoration of Machu Picchu

The full extent of the site could only really be appreciated after it had been fully cleared, a task which took several years. It was then possible to identify the individual structures and gain an insight into what life in Machu Picchu was actually like. The Peruvian government fully realised the significance of the site both as part of the country’s rich heritage and also as a visitor attraction and work began to reconstruct many of the outermost buildings and terraces to give visitors a chance to see what the place would have been like during its heyday. The restoration work is still on-going today. 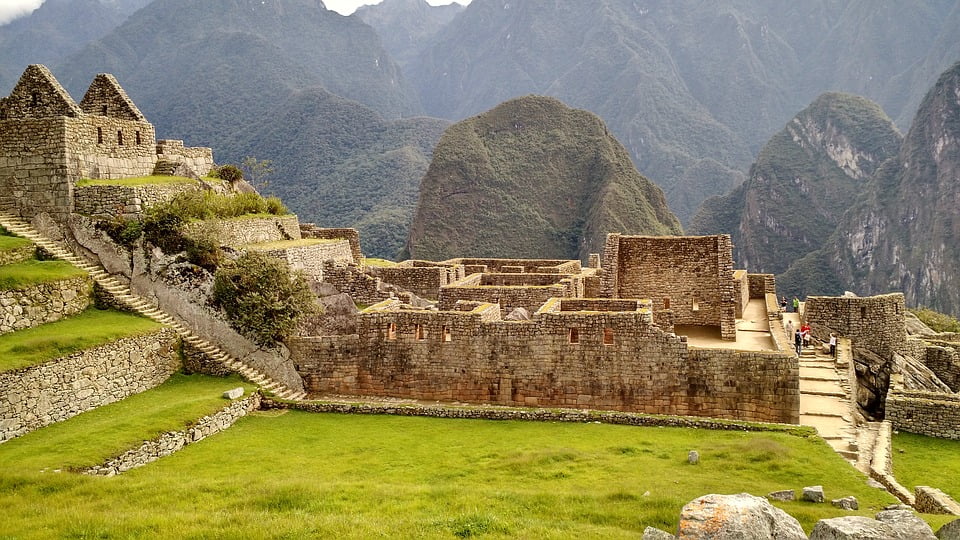 Maps are now widely available showing the layout of the township. The three major structures are the Inti Watana, the Temple of the Sun and the Room of Three Windows. The town is divided into specific areas, some being for the ruling classes and others for the commoners. There is even a prison area and an industrial sector. Dry stone walls abound everywhere and the steep mountain sides are a mass of terraces where crops could be grown. The incredible Inca stonework is at its finest on many of the most important buildings with huge, apparently randomly shaped stones fitted together with such precision that a knife blade cannot be put between them. 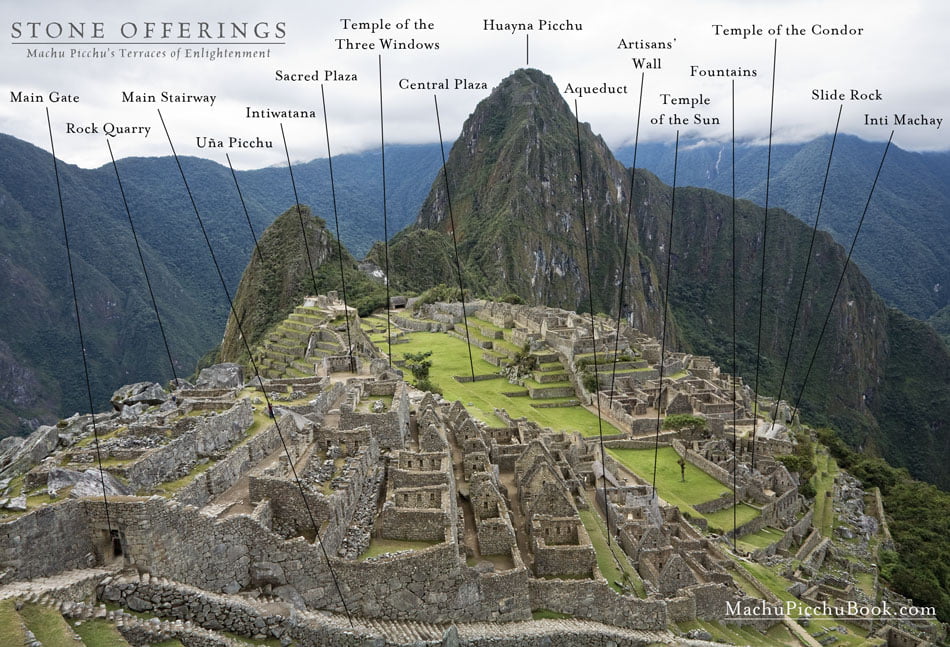 The Temple of the Sun is a semi-circular building built around a large boulder and with views of the Sacred Valley below. At the time of the summer solstice, rays of the sun shine through a window and align with the boulder and a nearby mountain peak. Other stone obelisks are also thought to have astronomical significance as does the cave of Inti Mach’ay to the western edge of the site. This cave has a window opening through which the rays of the morning sun only enter at the time of the summer solstice. This coincided with the end of the Royal Feast of the Sun and the illuminated cave was used ceremoniously as part of the initiation of boys as they entered adulthood. 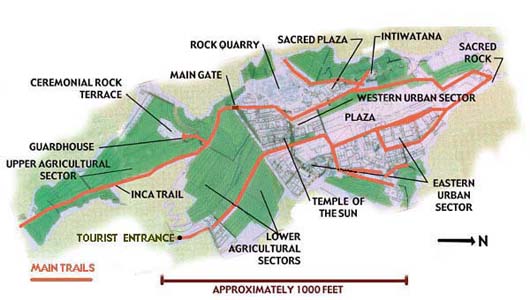 The Geography of Machu Picchu

At an altitude of 2,430 metres above sea level, this is high country by anyone’s standards but Cusco, the ancient capital of the Incas is even higher and is around 80 kilometers to the south-east of Machu Picchu. The site stands within a loop of the river Urubamba, the river being on three sides flowing through the Sacred Valley. From the river, the mountains rise steeply as sheer cliffs to a height of around 450 metres. The valley often has morning mists which rise from the river and it is often possible to look down on the clouds from Machu Picchu.

Around 400,000 people visit Machu Picchu each year and many tour operators can arrange travel and accommodation. Many people however choose to discover this intriguing place on foot, just as Inca people did. The Inca Trail is a long track following the ancient Inca path from Cusco. The full trek takes around four or five days and camping along the route is required. An alternative is to join the trail a little further along its route at Ollantaytambo which shortens it to one or two days walking.
For those who prefer “glamping” to camping, it is possible to opt for a guided tour with overnight stops in luxury lodges.

Many people will choose to visit Machu Picchu by train and the most popular starting point is from Cusco station. Those staying in Cusco will need a taxi to reach the station as it is not centrally located. There is a good choice of services to Machu Picchu including the luxury Belmand Hiram Bingham Train which offers full dining facilities and an Orient Express style. The rail services run to Aguas Calientes close to Machu Picchu and the three and a half hour journey follows a very picturesque route along the Sacred Valley.

From Aguas Calientes, there are regular bus trips to Machu Picchu with the road up the mountain consisting of a succession of hairpin bends on a single track road with sheer drops at the sides. Machu Picchu is open all the year round and it can be very busy at times. Sunday is the busiest day as this is when local people are allowed free entry. 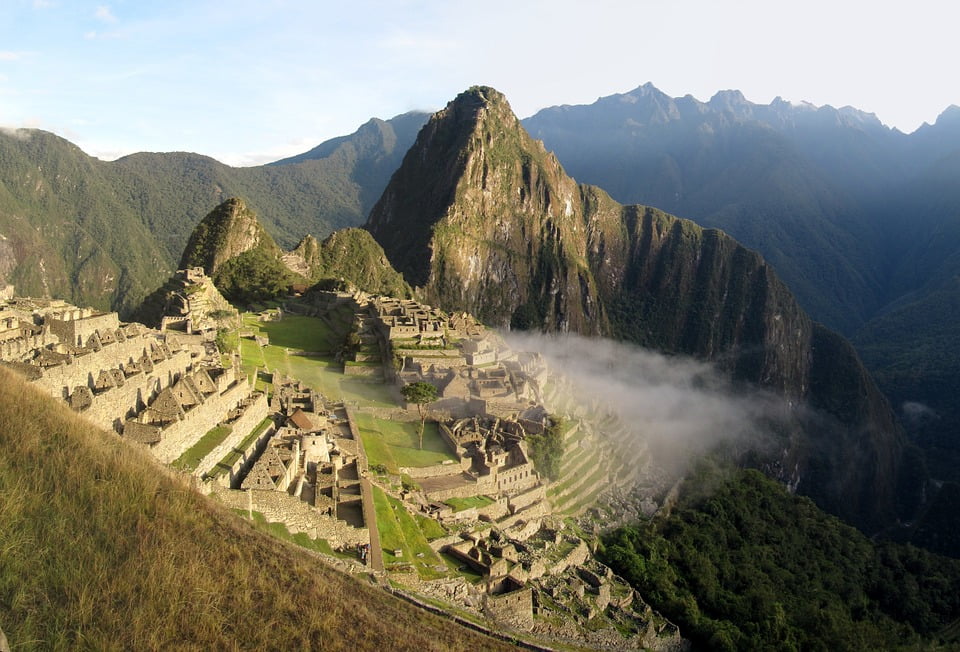 This area does have pronounced wet and dry seasons with the majority of the rainfall being between October and April but it can rain at any time so suitable clothing is essential. For those wishing to follow the Inca Trail, it should be noted that this is closed during the whole month of February. Safety is another important consideration as the whole of this site is potentially very hazardous with many steep drops. Bad weather can further increase the dangers. Some visitors have also suffered altitude sickness and those with respiratory problems need to be particularly careful in this rarefied atmosphere. Some experienced mountain travellers feel that it is better to minimise the amount of time spent in Cusco as this is the most likely cause of any altitude related problems.

Machu Picchu was built as a secluded retreat. Visitors could easily be repelled and it even managed to avoid the attention of the Spanish conquistadors but today visitors are welcome to come and enjoy one of the world’s most important archaeological sites and experience the breath-taking beauty of this mountain hideaway. There is nowhere else like Machu Picchu and it fully justifies its description of being one of the New Seven Wonders of the World. 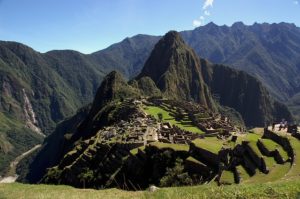