The Verdon Gorge is one of Europe’s most beautiful river canyons. Situated in Provence Southeastern France, its name is derived from the striking turquoise color of the Verdon River that flows along its picturesque 25 kilometre (15.5m ile) length. Reaching a depth of 700 meters (2296ft) at numerous points, the Verdon Gorge (‘Gorges du Verdon‘ in French) is a popular destination for hikers and rock climbers alike. Fascinating features of the Verdon Gorge include the Styx du Verdon, a sub-canyon of the gorge, and the ‘Imbut’, a funnel that appears to vanish into the rock.

The gorge is a popular location for kayaking and hiking due to it’s close proximity to the French Riviera. Rock climbers also flock to the area due to the range, number (over 1,500) and difficulty of the available climbs.

The whole area used to be under the sea in the Triassic era (around 250 million years ago). Millions of years of compressed sea floor, sea shells and corals built up and were compressed to form limestone rock. Over time plate movements caused the sea floor to rise until it emerged from the sea to form the alps. The ice age caused glaciation and as they moved and melted the soft limestone was worn away creating the valleys, rivers and rock formation of the Verdon Gorge. 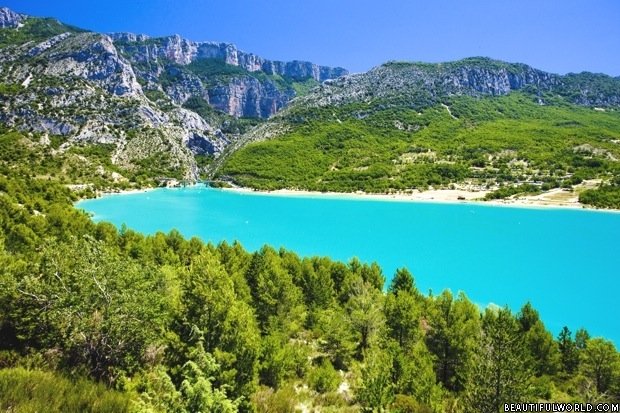 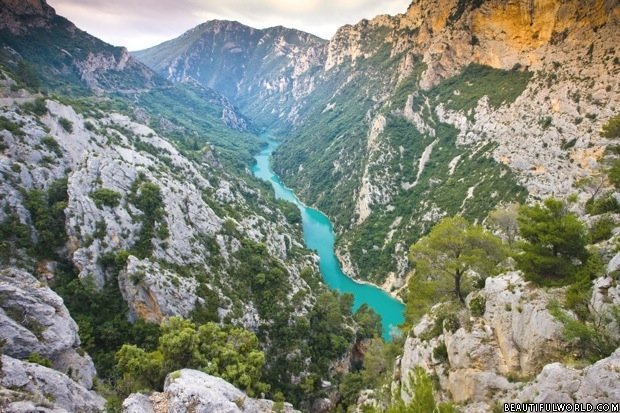 Where to Stay When Visiting The Verdon Gorge

Moustiers Sainte Marie is very close to the Gorge and has plenty of accommodation options. However, it is reputed to be one of the most beautiful villages of France so it will be busy and pricey. Les Salles sur Verdon is on a lake and lovey but again is busy high end location. If you want something a bit lower key then Castellane is a good option. 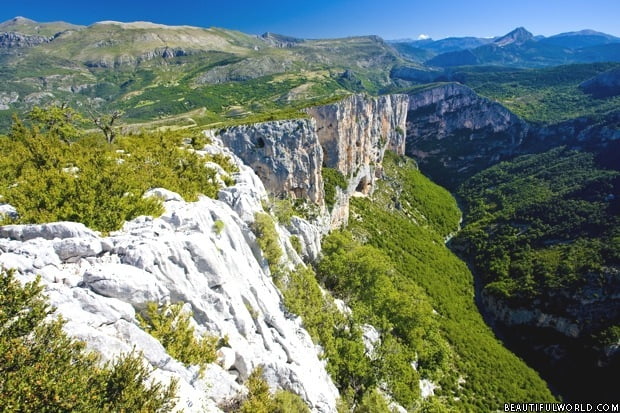 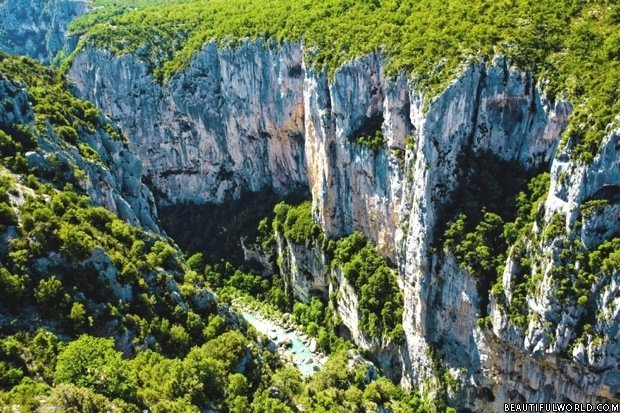 Hiking In The Verdon Gorge

The Gorge is accessible from roads to the North and South. There are several well know hiking routes;

Today’s route travels the right bank for is 15km or 9 miles from Point Sublime to the Châlet de la Maline. It is a long and tough walk and even fit hikers will take around 12 hours to do the round trip with a one way trip taking 8 hours with the detour via La Mescla.

Beginning at La Maline and going toward the canyon, the route descends in hairpins to join the water at the Estellié ford. Notable sights along this section include the Ravin de Charençon, the Pas d’Issabe, the Pré d’Issane (a small pebble beach along the Verdon), the Étroit des Cavaliers (a narrow passage between cliffs), the Guèges scree, and the large cave of Baume-aux-Boefus. A detour allows one to visit la Mescla, where the Artuby river joins the Verdon.

The main path towards the Point Sublime quickly ascends and comes to the Brèche Embert and its 6 stairways, totaling 252 steps (descending). Thereafter, the route climbs again along the Verdon, first very high above the riverbanks, then very close, to arrive at a pebble beach by the Baumes-Fères stream, near the cliff of l’Escalès.

The hike continues along the river bed, passing the Tours de Trescaïre on the other bank: two impressive monolithic pyramids. Then comes three tunnels: the Tunnel des Baumes, the Tunnel de Trescaïre, and the Tunnel du Baou, which were originally built for hydroelectric projects that were abandoned after World War II. Hikers wishing to explore these need pocket lamps and warm clothing; they range in length from 110 metres (360 ft) to 670 metres (2,200 ft).

At the end of the Tunnel de Trescaïre is a view of the narrowness of the Gorge, with the cliff walls of l’Escalès to the left and the rock face of l’Encastel to the right. Partway through the Tunnel du Baou there is a window hollowed through the rock that allows access to the Baume aux Pigeons, with a steep metal staircase leading to the river and its rock formations. After this last tunnel, the route goes beside the Verdon once more, then over the Baou to a new footbridge, leading back to the car parks. 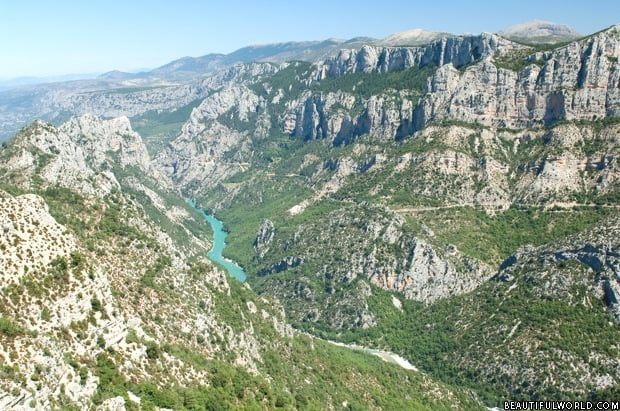 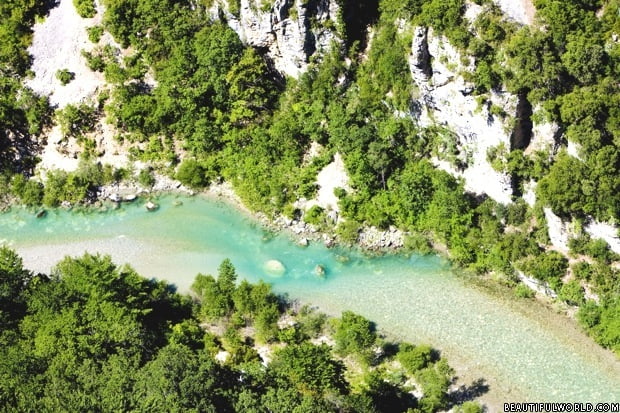 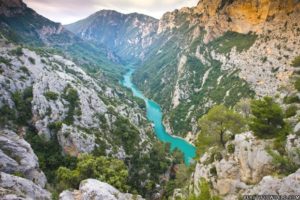