So exactly what colour is an iceberg? Those who have never seen one will probably expect it to be white or transparent like an ice cube. The more experienced travellers will doubtless point out that an iceberg is usually pale blue in colour often with a covering of white snow but only those who have visited Jokulsarlon, Iceland’s famous glacial lagoon, are likely to say that, in some cases, icebergs can be blue with black stripes!

Jokulsarlon, which literally translates as “glacier river lagoon” is a spectacular body of water on the edge of the Vatnajokull National Park in south-east Iceland. In the past, this area was covered by the terminus of the Breioamerkurjokull glacier. Ice faces of this type are usually called “glacial snouts” or “glacial feet” and although to the casual observer they may appear to be static, they are in fact moving either forwards or backwards.

In the case of the Breioamerkurjoull glacier, the glacial snout is definitely receding and doing so at an alarming rate. Incredibly, this lagoon did not exist before around 1930 and since then has steadily been increasing in size. As recently as 1948, the glacier simply launched its icebergs directly into the sea but, as the glacier became more and more distant from the shore, a large lake formed which now acts as a holding area for these massive blocks of ice until they become small enough to pass through the shallow opening to the sea.

In 1978 Jokulsarlon Lake, as it is often called although technically a lagoon, had a surface area of approximately 8 sq km. Today it covers around 18 sq km and, at 248 m, is Iceland’s deepest lake. The landscape therefore is in a constant state of change. It is estimated that in around 150 years time, the site of the present day glacial tongue will have been replaced by a deep valley and the days of the captive icebergs will be a distant memory so anyone intending to visit Jokulsarlon would be well advised not to leave it quite that long!

Iceland is becoming increasingly popular as a tourist destination but many first time visitors are a little unsure about what kind of weather to expect. A country named Ice-land could well be expected to be a barren ice-covered wilderness subject to bitterly cold and of course icy weather conditions. Some central mountainous parts of the country would certainly meet this expectation remaining frozen throughout the year and having many glaciers but most of the populated parts of Iceland enjoy a much milder climate than might be expected at this northerly latitude.

Summers can be particularly pleasant and visitors are sometimes surprised at the recommendation to bring along sun cream. The summer days are even more appealing due to their long hours of daylight, including 24 hour daylight around mid-summer. Winters on the other hand can be dark and gloomy. Snowfalls are to be expected along with sub-zero temperatures but these rarely cause any major travel disruptions (unlike in the UK!) and major roads are almost always passable.

It is hardly surprising that many visitors to Iceland are keen to see some ice and there can be no better way of really getting up close and personal than by exploring some of the area’s ice caves. Around the Jokulsarlon area, many ice caves exist running beneath the Vatnajokull glacier which is Europe’s largest glacier. The caves form when melt-waters flow beneath the glacier resulting in the formation of channels. These ice caves exist all the year round but in summer they can be flooded, part melted or even prone to collapse. For these reasons, ice cave exploration is only possible during the winter when the ice remains fully frozen. There are many caves to explore but the one feature they all share is the vivid blue colour of the ice. Needless to say, all ice caving requires the services of an experienced guide. For those who find the idea of ice caving a little too claustrophobic, a good surface-based alternative is glacier hiking and this can be done at any time of the year.

Jokulsarlon is roughly a five or six hour drive from Reykjavik and many visitors choose to drive themselves. Hire cars are available and car parking is provided close to the bridge at the lagoon. It should be noted however that the road, Ring Road Route 1, follows a very scenic route and there are many beautiful places to see en-route such as the Eyjafjallajokull volcano, the black beach of Reynisfjave and the waterfalls of Seljalandfoss and Skogafloss. The trip to Jokulsarlon should therefore be regarded as a two day excursion (minimum) rather than a day outing.

Various organised tours are available and these are usually tailored to match the season of the year and take in several other attractions in their itineraries. Once at the Jokulsarlon lagoon it is possible to take a boat trip and get out among the thousand year old ice. Here it is possible to feel the chill from the icy waters and it may be possible to spot some of the area’s seals as they clamber around on the ice. Two types of boats are currently used, the first being an amphibious craft in which passengers are literally driven straight into the water and the other is the inflatable “Zodiac” which can provide an exhilarating trip. There is usually plenty of available space on the amphibians but for the Zodiacs it is recommended to book in advance to guarantee a place.

The icebergs being marshalled in the lagoon eventually make their way through the shallow opening into the sea where they receive the full force of the currents, tides and waves with smaller pieces being washed up on the nearby black volcanic beach. These beached mini-icebergs present an amazing sight on Jokulsarlon beach where they shine like precious stones giving rise to this beach being nicknamed the “Diamond Beach”.

Hotels and Accommodation near Jokulsarlon

Those looking for accommodation in the area have a good range to choose from. The four star Fosshotel Glacier Lagoon is a luxury choice and the Hotel Skaftafell in the nearby Skaftafell Nature Reserve provides good mid-range facilities. The closest to the lake are the Hali Country Hotel and the Gerdi Guesthouse. For budget hostel-style accommodation, Vesturhas Guesthouse and HI Hostel Vagnsstadir are very popular. Due to the limited number of places available, pre-booking is advisable. Those unable to secure local accommodation may have to travel a little further and a trip to the town of Hofn, around 75 km to the west, gives many more choices such as the Hotel Edda Hofn, HI Hostel Hofn and Lambus cottage which has amazing views over the Vatnajokull glacier.

Jokulsarlon in the Movies

The amazing scenery of Jokulsarlon has not gone unnoticed by Hollywood film makers and it has featured in a number of blockbusters incuding: Die Another Day, A View to Kill, Batman Begins and Lara Croft – Tomb Raider. Film buffs may recall seeing Pierce Brosnan driving across the frozen surface of the lake and this filming was done during winter. It has led to a common misconception that the lake freezes solid during winter locking the icebergs in place until the coming of the spring thaws. This mistruth even appears on the pages of Wikipedia. When the film was made, the lake was dammed isolating it from the sea and so allowing it to freeze for that year. Temporary “cotter” dams are regularly used in order to allow heavy earth moving equipment into the area to form rock barriers to guide passing icebergs safely under the bridge without causing damage to the bridge foundations. In winter some surface ice forms but the icebergs continue to move.

The Best Time to Visit Jokulsarlon

This is a dynamic landscape changing from year to year. Summer visits benefit from the 24 hour daylight and mild weather along with the prospect of boat tours, The amphibians run from April to October and the Zodiacs from June to September. Winter is best for ice-caving and many people consider the area’s scenery to at its best when wearing its winter clothing. Another more elusive attraction is the possibility of witnessing the Northern Lights or Aurora Borealis in such a beautiful location.

There are tours specifically designed to witness this great natural light show but despite all of the scientific studies and forecasts, Aurora tends to be an elusive creature akin to a temperamental diva. She seldom appears on time when expected but, when she does make an appearance, the show can be simply out of this world. The sight of the dancing heavenly lights over the snow-covered mountains reflecting from the majestic icebergs is surely one of the most spectacular displays of natural beauty to be found anywhere on Earth. And as for the striped icebergs, the stripes of course are the layers of volcanic ash from eruptions that have occurred over the centuries. There is certainly no place on Earth quite like Jokulsarlon. 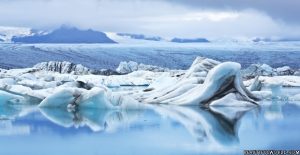