Tucked away inside the Hochkogel Mountain in Werfen, lies Eisriesenwelt, the largest ice cave in the world. Sprawling an enormous 26 miles (42km) through the Tenneggebirge section of the Alps, Eisriesenwelt aptly translates to “World of the Ice Giants” in English. Only the first 0.62-mile (960m) of the cave is sheathed in ice, though luckily, it is this area in which members of the public are allowed access. With a plethora of spectacular ice figures and frozen waterfalls, Eisriesenwelt is a marvellous spelunking oddity that offers visuals of unsurpassable beauty.

The caves were officially discovered in 1879 by an Austrian natural scientist named Anton Posselt. Although Posselt only dared to venture 200 metres into the cave, he was fascinated by what he had exposed, writing his account in a mountaineering journal. Prior to his discovery, only the residents of Werfen were aware of the caves existence, believing it to be a gateway to Hell. For many years, the caves remained unexplored, but in 1912, Alexander von Mörk led several expeditions, thereby setting a trend for exploration by others.

How was Eisriesenwelt formed?

Through geological and scientific testing on rock and ice deposits, scientists have been able to date the caves at between 50 and 100 million years old, though the ice formations are a far newer phenomenon, originating approximately 1000 years ago. No major event was responsible for the sudden creation of the Eisriesenwelt caves. Rather, the combination of water erosion from the Salzach River and chemical reactions over an extended period of time has been identified as the cause. Fissures and cracks in the limestone rocks manifested and have steadily grown since their formation to ultimately culminate in the ethereal cave labyrinth that is Eisriesenwelt. Whilst the caves continue to expand, progress has been slowed down due to the limited water now in the area. The portion of the cave sheathed in ice remains frozen all year round due to the freezing cold temperatures and ice-cold winds that are omnipresent within the caves.

When is the best time to visit Eisriesenwelt?

The cave is not open to the public during the winter, with the official opening season running from 1st May to 26th October. Ideally, the best time to visit the Eisriesenwelt would be on a hot/sunny day as the stark contrast in weather experienced inside/outside the cave serves to add to the occasion. Moreover, the panoramic view of the Salzach valley can be magnificent if the sky is clear.

How to get to Werfen

The Eisriesenwelt caves are situated in Werfen, a small idyllic village approximately 40km south of Salzburg. The best way to get to Werfen is to drive, taking either the trunk road from Salzburg or the Tauern autobahn (A10). Alternatively, a train service is available to Werfen station.

Things to consider prior to visiting

– Even in summer, the temperature in the cave remains below freezing and thus warm clothing and layering is necessary.
– Visitors should possess a reasonable level of physical fitness as reaching the entrance of the cave requires a 124m ascent. Prior to a visit, each individual should take this into account, and make an honest assessment of his or her own physical capability.
– Whilst there are no set rules regarding footwear, it is recommended that you wear heavy shoes with good grip, as you will be faced with some narrow, slippery paths.
– Both photography and filming are strictly prohibited. 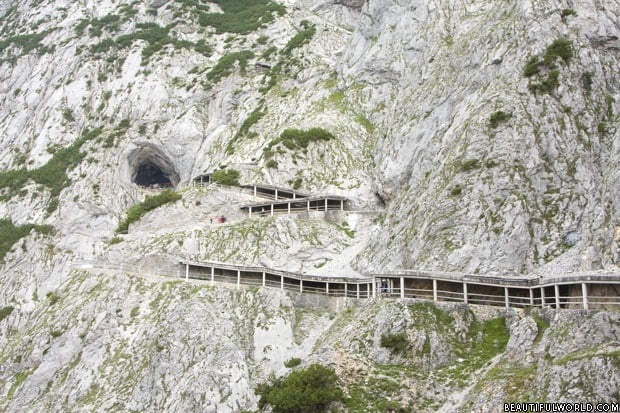 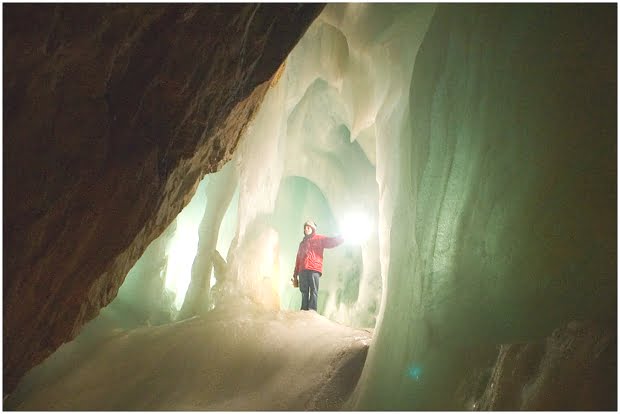 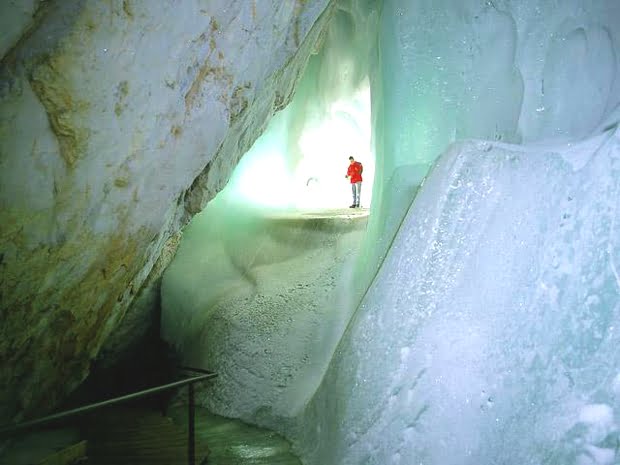 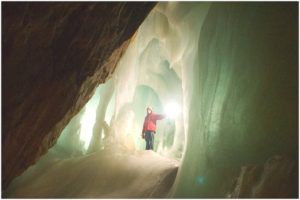