The Sahara is the largest non-polar desert in the world. Covering approximately 3.5 million square miles (9,064,958 sq. km), it occupies land pertaining to Algeria, Chad, Egypt, Libya, Mali, Mauritania, Morocco, Niger, Western Sahara, Sudan, and Tunisia. The boundaries of the desert are the Red Sea to the east, the Mediterranean Sea to the north, and the Atlantic Ocean/Atlas Mountains to the west. The southern border is delimited by the Niger River and the Sahel, a transitional belt that transverses the continent at the line where the desert landscape transforms into a semi-arid savannah. Whilst the vast majority of the Sahara is comprised of large sand expanses, there are in fact some mountain ranges and grasslands, sparse though they may be.

A little known interesting fact is that the Sahara Desert is often cited as the largest desert in the world, the Sahara is actually the third largest. By definition, a desert is an area which receives less than 10 inches of precipitation per year. Both Antarctica and the Arctic therefore qualify as deserts, and are larger than the Sahara. The Sahara is, however, the largest hot desert. 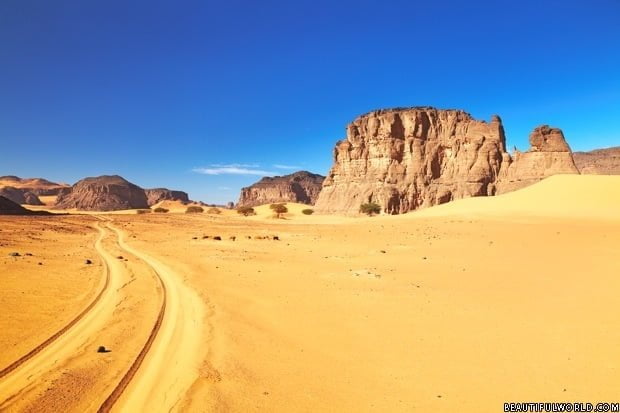 The name ‘Sahara’, is derived from Arabic, and translated literally means ‘the greatest desert’.

The Sahara is roughly the size of the continental United States.

The hottest temperature ever was recorded in the Sahara Desert, clocking in at an astonishing 58 degrees Celcius (136°F).

The Sahara has not always been a desert. After the last Ice Age, the landscape was left as dry and barren as it is today. However, about 10,500 years ago, a sudden onset of monsoon rains transformed the uninhabitable desert into a habitable savannah. As radiocarbon dated human and animal remains have proven to scientists, the humans and animals living in the Nile River Valley were able to expand out into the savannah. Over the next several hundred years, the rains continued, and human settlements grew and even introduced domesticated livestock such as goats and sheep. Approximately 7,300 years ago, the rains began to retreat, and by 5,500 years ago, the human population had returned to the Nile River Valley. 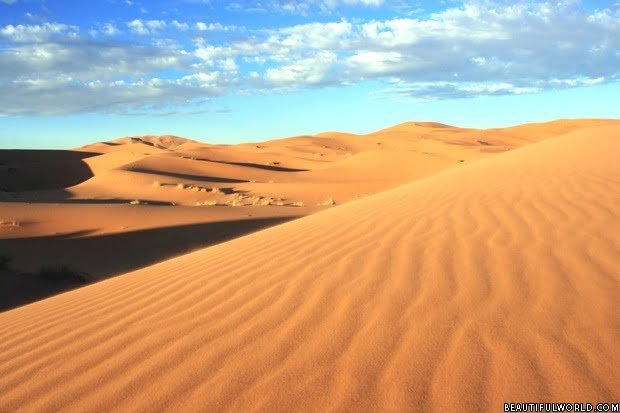 Geography of the area

The topography of the massive Sahara is surprisingly varied. Roughly 25% of the desert is covered by sand dunes. They can be small or massive, often reaching over 500 feet (152m) in height. They are found in the sand seas, called ergs, where the sand is constantly shifting with the wind. Periodic rains also transform the ergs. Much of the desert landscape is comprised of rock-strewn gravel plains called regs in addition to salt flats, dry valleys, and rocky highland plateaus called hamadas.

The Sahara Desert map below shows the land area and many countries that the Sahara desert spans, the desert is marked in brown.

The Nile River is the only permanent river in the Sahara. Other water sources take the form of intermittent streams and subterranean aquifers. The small towns and settlement in the Sahara are concentrated around the oases; areas where the underground water reaches the surface. The center of the desert is the most arid zone, with little precipitation and practically no vegetation. The northern and southern Sahara has shrubs, grasslands, and even trees in areas that receive more precipitation. Vegetation grows freely in the oases and the Nile River Valley. In fact, olive trees may even be seen near the Nile. You may be surprised to discover that the soil of the Sahara is surprisingly fertile and therefore in areas where irrigation is possible, excellent crops can be grown. There are also many salt lakes throughout the Sahara Desert.

There is a wide range of altitudes in the Sahara. Chad´s Emi Koussi, a volcanic peak in the Tibesti Mountains, is the highest peak in the Sahara, reaching over 11,300 feet above sea level. These mountains are actually high enough that they receive snow every 3 years or so. On the other hand, the Qatarra Depression in Egypt has a depth of 436 feet below sea level.

Plant life in the Sahara desert

The plant life in the Sahara is sparse, due to the harsh climatic conditions. Approximately 500 plant species are known to grow in the region. Plants must be able to adapt to hot and dry conditions, or able to live in areas with salt water. Given the immensity of the desert, the biodiversity is remarkably low. Acacia trees, grasses, spiny shrubs, and palms, for example, have adapted to the Saharan climate by growing closer to the ground to avoid water loss from strong winds. They can also store moisture in their stems and have roots that branch out horizontally to maximize the area they cover for moisture collection. Thick leaves and needles prevent evaporation. Along the Atlantic coast, there is enough moisture to sustain plants like lichens, succulents, and shrubs. In the highlands of the Tibesti Mountains and Jebel Unweinat Mountains, rainfall is more plentiful and temperatures are lower, so plants such as tamarix, myrtle, oleander, acacias, and palms can be found in the woodlands. 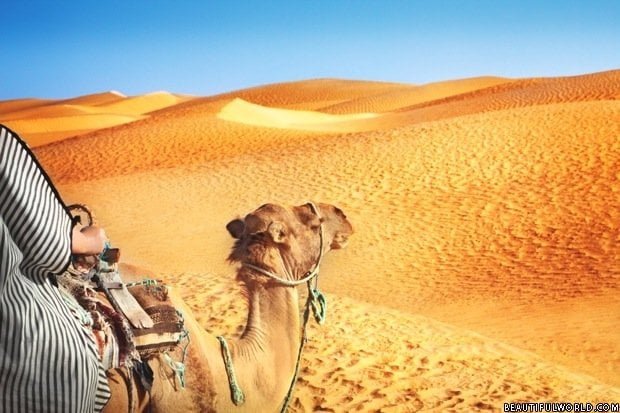 Animal life in the Sahara desert

Approximately 70 different animal species live in the Sahara. Mammal species include those that can survive for an extended period without water intake, such as the fennec fox, pale fox, African wild dog, Saharan cheetah, and the dorcas gazelle. The addax, a species of white antelope, is known to survive for as long as a year without drinking water. Several species of lizards, snakes, and scorpions also live in the desert. There are even desert crocodiles in parts of Mauritania and Chad. Saharan birds include the African silverbill and the black-throated Firefinch. The Berbers still inhabit much of the Sahara, and the only domesticated animals seen in the desert are camels and goats. 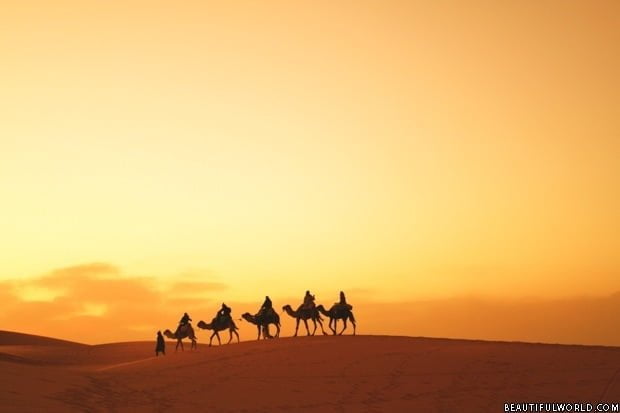 The hot, dry climate of the Sahara is especially harsh. In 1922, the highest temperature ever recorded was taken in Azizyah, Libya, at an astounding 136°F (57.7°C). During the hottest months of the year, temperatures regularly exceed 122°F (50°C). The average annual temperature in the Sahara is 86°F (30°C). Because the air contains very little humidity to hold the heat in, there is a great difference between daytime and nighttime temperatures. At night, the temperature regularly falls below freezing. In terms of rainfall, about half of the Sahara receives less than 0.79 inches (2cm) of rain a year, and the other half receives around 3.9 inches (9.9cm).

A strong wind called the Sirroco originates in the Sahara. Winds may be as strong as 62 miles per hour (100km) and are responsible for the hot and dry climate in Northern Africa. In fact, sand storms in the Sahara can be so big that they are visible from outer space! 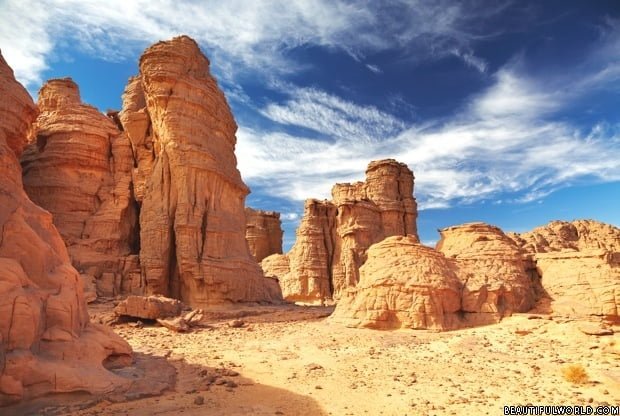 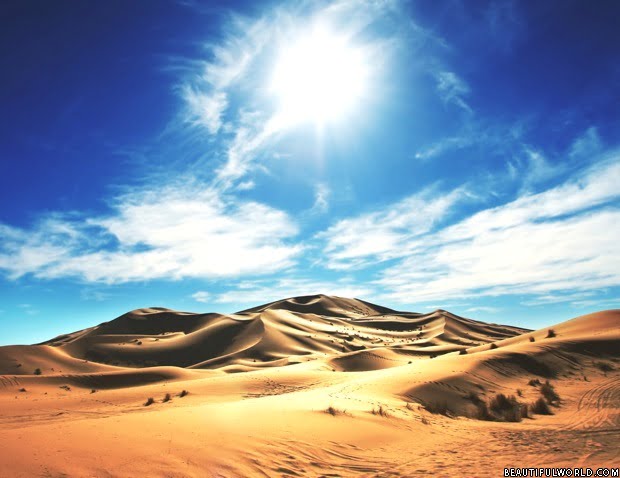 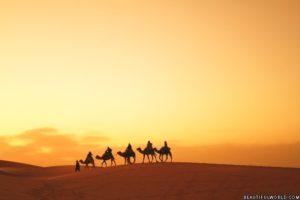